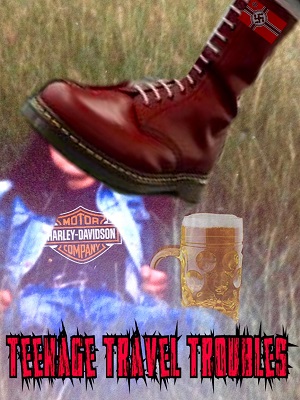 An old friend reminded me of this the other day. Tales of teenage travel trouble!

Way, way back in time there was a lot of trouble and very little love shared between English bikers and those of a skin headed mentality. Two young lads decided to escape and spend a peaceful summer in Europe, visiting friends and putting the worries of impending adulthood behind them.....

Having survived the Magic Bus ride to Paris, spending the night in the gardens of Notre Dame with a friendly Dutch tramp (hobo) and having most of our cash stolen, we happily boarded the right train, at the right station on the right day. (See my previous ramblings for the details!)

Arriving at Stuttgart train station we were greeted by the traditional welcoming German sight..... of the local police fighting on the platform with a large gang of skinheads!

The early evening brawl was apparently the prelude of some illegal far-right neo-nazi skinhead rally later that night.

The two young long-haired, leather-clad English boys stood in the summer sunshine, looking rather stupidly at the line of very armed police at the terminal.

Thankfully we were frisked, papers checked and given a warning to avoid the town centre for a few hours.

Great start. Even the glorious weather couldn't lift the mood.

I remember sitting on the hot curb, desperately trying to avoid eye contact with the warring tribes, praying we'd got the right train and our old mate was actually on the way to meet us and guide us to his father's house and away from the carnage.

A booted pair of legs filled my downcast eyes, something nasty sounding was growled at me in rapid fire German.

Looking up, in what I hoped was a confident manner, I was greeted with a huge hairy smile, an outstretched hand and a "Had you going there, mate! Sorry I'm a bit late, came straight from work."

That explained the steel toe caps then!

Laughing at the prank and cursing my total lack of language skills, we walked off, chatting about the journey so far, the weeks ahead, and how much we all hated bloody skinheads.

A local bus ride took us into the surrounding countryside,

Esslingen, Ostfildern, strange names 'Bad' in front of most street signs, surely not an omen?

The place was wonderful, beautiful house up a rather steep hill, we were shocked at the size of the house and unbelievably (for two lads from terraced houses) there was a swimming pool!

Minutes later and there we were splashing about, cold beers, high spirits and then the police car pulled up.

Turns out nothing more than a village Bobby kindly warning the locals of an impending thunderstorm, phone lines down, advice to stay out of the pool, severe lightning strikes would not be so cool, yah?

The reunion party was taken indoors and lasted for most of the following week, great times!

Long walks through the surrounding area, (we would be back to ride those roads one day), wonderful people, great scenery, decent food and good mates.

Even the huge American airforce base on the outskirts was quite interesting, watching the planes take off and land.

We even saw a few Harleys riding around inside the fences, cool-looking bikes.

Our last weekend before heading back. Let's do a rock club in the city. Massive place on several floors, great music, huge steins of rather nice beer, the place was packed.

Even more unluckily, the trousers belonged to a mountain dressed in motorcycle gear.

Desperately unluckily this motorcycle gear proclaimed the mountain belonged to one of the most famous and infamous bike clubs in the world.

A lot of mountainous German swearing followed. I apologised profusely, offering to buy the mountain a drink, obviously in English.

"You guys Limeys?" The mountain was apparently multilingual.

Long story short, mountain man and his buds were US airmen, really cool dudes who enjoyed having a rather star struck fledgling biker audience to tell their tales to, we happily soaked up their stories of Oakland, Brotherhood and bikes.

Great evening, until we left for the last bus out of town.

Sitting quietly at the stop, now rather beer-sodden we were suddenly surrounded by a rather nasty looking gang.

Have I mentioned I hate skinheads?

We went down hard.

Boots seemed to make the ground tremble and the air rumble.

Protecting my head the best I could, ignoring the roaring in my ears, I waited for more pain.

Instead I was pulled to my feet by a grinning American mountain. Psychos now fleeing from the roaring Harleys.

Jokes about "the good old U S of A saving us Brits again," a rather enjoyable pillion ride back to my mates house and an invitation to visit the base if we wanted to see the bikes.

Sadly we never had time for that visit but I am eternally grateful for that club rescuing us from a rather nasty situation. Total strangers stepping in to help a kindred spirit.

Germany was wonderful, a great European trip all in all, really reinforced my love of all things two wheeled...and my hatred for bloody skinheads!