Preparing to Greet the Groundhog 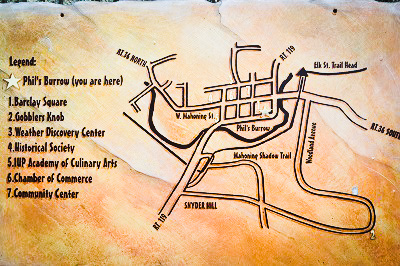 It's that time of year again – when we in Pennsylvania are so tired of snow and ice that we're willing to turn to rodents for encouragement.

We refer, of course, to Groundhog Day, that jocular misuse of Candlemas tradition that takes place annually and raucously over in nearby Punxsutawney. Why isn't the Post Editor going to Punxsy1 this 2 February, or indeed, any 2 February? Let me count the reasons:

How good is Punxsutawney Phil? More precisely, how good are groundhogs as weather prognosticators generally? Lousy. This information comes from 1911:

William Gehman, one of our subscribers, of Macungie2, has given the groundhog's veracity as a reliable weather prognosticator a severe blow.

Since 1864 Mr Gehman has kept a diary in which he noted carefully each year what the weather was for the six weeks following each annual Candlemas or the day on which the groundhog either returns to his burrow or remains outside to frisk and bask in the sunshine.

Since 1864 the groundhog has made good about once every ten years. The average is entirely too low, and to regain former status and re-establish a record of credulity [sic] the ground hog will have to do much better.
The Pennsylvania-German, vol 12, January-December, 1911, HW Kriebel, Editor, Lititz, Pennsylvania

That same volume of the renowned folklore authority also has an article entitled 'Government Weather Forecasts versus Fake Forecasts and Almanacs', by a 'Pennsylvania Dutchman'. The gentleman in question finds Bauernweisheiten (farmer lore) risible in general. He contrasts the old Pennsylvania Dutch almanacs – the first of which was printed by Benjamin Franklin! – unfavourably with the ultra-modern activities of the US Weather Bureau. Those are some of their instruments. We are suitably impressed, especially as the article also included photos of their kite capabilities. Yes, people, the Weather Bureau had aerial technology back then.

But they still couldn't tell us when winter will end. Neither, alas, can Phil the Groundhog, no matter how much beer they drink in Punxsy. But as long as those hordes of 'English' (Pennsylvania Dutch term for 'anybody who isn't Pennsylvania Dutch') don't get stuck there, it's all good.

Excuse me while I go and turn up the thermostat a notch.

1The natives call it 'Punxsy'. At least three people have referred to the place this way in conversations with the Editor in the past week.2Now a suburb of Allentown, Pennsylvania.