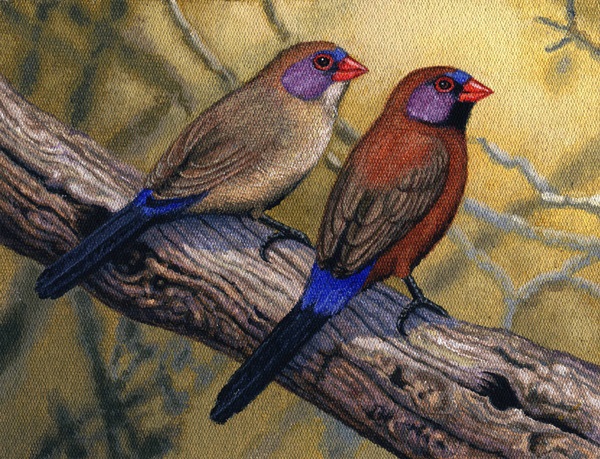 Another treat for you (which I hope you appreciate)! These are Violet-Eared Waxbills, Granatina granatina. The male is the one with the richer reddish-brown body plumage; both male and female have the violet patches on the sides of their heads for which the species is named. These are among the larger waxbills, reaching 15 cm/6" in length. I did my best to do them justice in my painting, but for best results they should be seen alive in the wild, so if you ever come to South Africa get in touch and we can go see if we can find some. They're not at all rare in our local game reserve. They occur in dry savannah and woodland in the north of South Africa, in most of Zimbabwe and Namibia, in all of Botswana, and in southern Angola.

Many species and groups of plants and animals have distribution patterns similar to that of the violet-eared waxbill, namely ranges that are centred around the great, dry, open savannah woodlands found in Botswana, Zimbabwe, Namibia and the northern parts of South Africa. What is intriguing is that these groups almost always have counterparts in another, climatically similar but geographically distant part of Africa, namely the north-east/Horn of Africa region stretching from north-central Tanzania through Kenya and Somalia to Ethiopia. This region has a similar dry and distinctly seasonal climate, and the vegetation ranges from dry, scrubby woodland to open, grassy savannah. In this region the animals and plants are similar to what are found in South Africa, and closely related – in some cases the species are one and the same, in other cases they're different but still close. In the case of the violet-eared waxbill, the north-eastern counterpart is the Purple Grenadier, Granatina ianthinogaster. The two species look very similar, but put side-by-side the differences are clear. Purple grenadiers are actually not purple, but also mainly russet-brown with (in the male) some blue on the face and belly. Other species with similar distributions here and in north-east Africa include dik-dik antelopes, spring hares and bat-eared foxes – and indeed many more. There are of course exceptions … types found in Southern Africa without counterparts in north-east Africa, and vice-versa.


But the frequency with which this kind of distribution pattern is seen, demands some kind of explanation. This is given by understanding climate and evolution together. Climates in Africa, as in the entire world, have always been changing over time. We're living in the Ice Ages right now, in a warm period that separates colder periods. The cold periods are called 'glacials' since they're associated with the spread of the glaciers, while the warmer periods are called 'interglacials'. Even though Africa has remained warm during the glacial periods, there have been effects on the distribution of vegetation types. The cold, glacial periods have been somewhat colder and drier than the warm interglacial times. So, during the peak of the previous glacial period, dry habitats were more extensive. While, today, a belt of fairly moist woodland and grassland comes in between Southern and North-Eastern Africa, separating the two dry regions from each other, during the last glacial (and presumably other glacials also) the dry country was continuous from here right to the tip of the Horn of Africa. That means the species living in this kind of dry, open country could range uninterrupted from here to there.


Now the other thing to understand is how this affects evolution. Evolution happens through the accumulation of changes in individual animals to the point where the entire species changes. But this change happens within the boundaries of a population of animals that are all breeding with each other and mixing their genes. Imagine a single species, of which all the animals live in a single, mixing and mingling population. There can be a lot of diversity between the different individual animals of this species, but this diversity gets spread around the population because they're all interbreeding. Over long periods of time, the population as a whole will slowly change, but the changes will also get spread throughout the population. The species might change, the differences accumulating until it is for all purposes a new species, but all the animals in the population at any given time will still be the same species, provided they're still all interbreeding with each other.


But what happens if you take this population of this species, and divide it into two parts, which are kept isolated from each other? The inevitable process of change will now mean that the changes in one part cannot get spread to the other part, and vice-versa. So as changes accumulate within each population – and not getting shared between all the animals – the two populations will slowly begin to differ from each other. Given enough time, they will indeed become different species. Since differences can often be neutral, that is to say neither beneficial nor harmful, it can happen that when these species are then put together again, the two kinds could co-exist and voluntarily maintain their separateness from then on.


So this must have happened in the case of the violet-eared waxbill and the purple grenadier, not to mention all the great many other counterpart species found in Southern and North-Eastern Africa. Climatic changes meant that sometimes these two dry regions were united, sometimes they were separated. During times of separation, species evolved independently in the two regions; in the times of unification, they could range into both regions. Sometimes a species from one region proved to be better adapted to its environment and way of life, causing the 'fitter' species to overwhelm the less-fit and causing its extinction, but in many cases the species were not better or worse, just different, and both managed to exist side-by-side. In the case of mammals, many species are still the same in Southern and in North-Eastern Africa, differing at the sub-species level, but in birds and especially in plants, the differences have led to quite different species, or even different genera. Over vast stretches of time this is the kind of thing that drives evolution and gives rise to such a wonderful diversity of different living things on our planet.


Getting back to our waxbills. Violet-eared waxbills are rather shy and furtive and difficult to view up close, tending to flee into rank grass or thorny bushes when a human approaches them. But there's a hack. They need to drink fresh water every day; they usually start the morning with a drink, and again go for a drink in the late afternoon. If you can find a pond or watering hole in a region where these waxbills occur, and wait, either in the early morning or the late afternoon, remaining very still and well-concealed, and for a good bit of time, you might be rewarded with views of these beautiful and delightful birds coming down and sitting in the open to drink.


But it's not impossible to catch views of these waxbills in the bush, if you're quite alert. It helps to have a powerful pair of binoculars. Males and females are both exquisitely pretty birds, and being monogamous, are typically seen close together. They will flit through grass and bushes, and go down to the ground to pick up fallen seeds. They also often perch on grass stems, but being rather heavier than for instance swee waxbills their weight tends to bend the stems down until they're sitting on the ground with the seed-head held down under their feet, making it easy to feed from it. They use their strong, conical bills to crack the seeds to get at the goodness inside. They also eat small fruits and will catch insects, being fond of the flying termites that emerge in spring or summer after good rains.


Like other waxbills, these ones make their nests from dry grass, wedging them together into untidy-looking bundles, with an entrance hole leading to a central chamber. The female lays three to six eggs in there. Sometimes another bird will add an egg or two to this clutch – not a waxbill, but a shaft-tailed whydah! The whydah chicks hatch and grow up with the waxbill chicks, unlike the cuckoos or honeyguides whose chicks will kill or evict the chicks of their hosts. The baby whydahs also look exactly like the baby waxbills, down to the pattern of colourful knobs and ridges they have inside their mouths. Whydahs also learn the calls and songs of their waxbill foster-parents and 'siblings', and mingle these into their own songs. In the end there doesn't seem to be any animosity between whydahs and waxbills, since they often flock and feed together.


At present, violet-eared waxbills have a large range including many pristine areas, frequently inside big nature reserves or national parks, and thus are not considered endangered. Small numbers are caught for the caged bird trade. This doesn't really threaten the species as a whole but is a nasty thing to do, since these waxbills love the vast, open bush country of Africa and couldn't conceivably be happy stuck inside a small cage. Indeed, they rarely survive such an experience for very long.