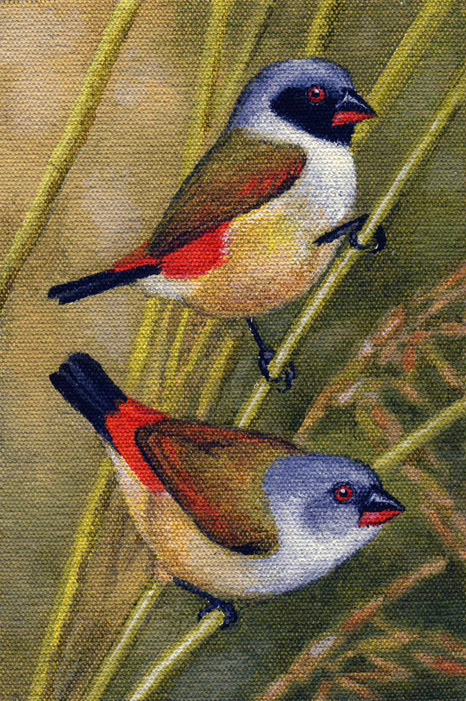 Now for something colourful again! These sweet little birds are Swee Waxbills, Coccopygia melanotis. They're sometimes called Black-faced Swees to distinguish them from the East African Swee or Yellow-bellied Waxbill, in which the male and female both lack the black face mask. Their name comes from their thin, high 'swee-swee' calls. Swee Waxbills only occur in Southern Africa, inhabiting rank vegetation typically at forest edges, but they sometimes enter gardens. They're very small, reaching 9-10 cm/3.5-4" in length.


I don't see swee waxbills very often. They don't occur in or close to my home town of Polokwane. The closest populations live around the forests of the Magoebaskloof region. The first one I've seen was at the highly scenic Debengeni Waterfalls. The tiny, brightly-coloured bird was magnificently offset by the forest and rocks and cascading waters. Since then I've had more glimpses. These birds are fairly furtive here in Limpopo, but in other places like the Eastern or Western Cape, where they've learnt to live in gardens, they can be extremely tame. Being so tiny, they easily vanish amidst herbs and grasses, but their swee-calls give them away. These calls carry surprisingly far. If you hear it, just wait and be patient and the little birds will hopefully soon appear. They're very active, flitting about, twitching their tails, never sitting still, so you should feel quite fortunate to catch a few brief but good glimpses.


A good glimpse will tell you just how pretty they are. The males have black faces, while those of the females are grey. Both sexes have black-and-red bills, bright red rump feathers, olive-green backs and yellowish bellies. They belong to the waxbill family, one of the most diverse bird families in Africa, which includes a ridiculous number of extremely pretty species.


Waxbills are generally seed eaters, and swees are no exception. Their bills are stout for their size, and they feed mostly on the seeds of the grasses that grow vigorously on the edges of forests or in clearings. They inhabit these transition zones between a variety of different habitats: forest/grassland edges, forest/fynbos edges, forest/savannah edges, or dense vegetation on the banks of rivers in otherwise dry regions. They also sometimes inhabit dense thickets such as are found in river valleys in the Eastern Cape and Kwazulu-Natal. They move around in response to rainfall and plant growth, and thus may enter and leave certain regions seasonally. It is amusing to see them perch on the thin stems of grasses, and being so light that they barely bend these over. Other than grasses, they also eat the seeds of weedy plants, and catch and eat a small amount of insects. Swee waxbills are usually found in pairs or small flocks.


Like most other waxbills, swees build their nests from grass. These are not tightly woven as those of the weaver family, but more rather untidy balls of grass stems shoved together, with a tubular entrance spout leading to a central chamber. In here, the female lays four or five eggs. Unlike other waxbill species, swees are rarely parasitized by the whydah family. The chicks grow quickly and accompany their parents for a couple of weeks after fledging.


Swees are reasonably common and widespread. They occur in all provinces of South Africa except the Northern Cape, and also in parts of Lesotho and Swaziland. They are rare further north, only a few having been seen in Zimbabwe. In eastern Zimbabwe and further north into Africa, they're replaced by the East African Swee or Yellow-bellied Waxbill. Swees are sometimes caught and sold for the cage bird market, and in some places suffer from habitat changes due to farming and residential expansion, but generally are not considered threatened.