While looking for some really obscure pioneers, we run into scholarship so elaborate that we can only give this fellow the 'h2g2 forerunner' award. He would have enjoyed talking to Bluebottle.

Johann Beckmann, the author of this book, A History of Inventions (1846), was a man after our own hearts. He never met a footnote he didn't like. He doesn't know who invented knitting, but he doesn't care. He'll talk on at you about anything. We thought you'd like this bit: it's pretty funny. And there are a lot of footnotes. I think I'll add a few of my own.

Did Knitting Come from Scotland? 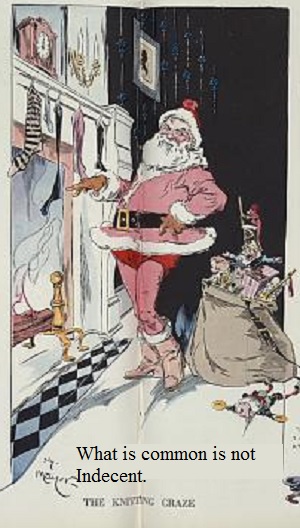 That the Roman and most of the ancient nations had no particular clothing for the lower part of the body, is so well known, that it is unnecessary for me to repeat the proofs1. Their legs however did not suffer more from the cold than our hands when they are not covered by gloves2, or than the feet of the Franciscans at present; and what is common is not Indecent3. It is well known that the northern nations first had hose or trowsers[sic], which covered not only the legs but the thighs and loins; and it was not till a few centuries ago,
that from this article of dress people began to make two; the upper part retained the old name, and the lower, that which covered the legs, was called in German strumpf, truncus, which word Maler in his Dictionary explains by halbhosen, half-hose, and hosenstrumpf4. The diminutive strümpfle signifies, according to this author, hose that reach to the calf of the leg5. The first stockings were of cloth, and made by the tailors; consequently they were not so commodious as our knit-stockings, which, for the reason already mentioned, become closely contracted, without pressing the foot or impeding a person in walking.

It is more than probable that the art of knitting stockings was first found out in the sixteenth century, but the time of the invention is doubtful; it is also uncertain to what people we are indebted for it, and the name of the inventor is entirely unknown6. Savary appears to be the first person who
hazarded the conjecture7 that this art is a Scottish invention, because the French stocking-knitters, when they became so numerous as to form a guild8, made choice of St. Fiacre, a native of Scotland, to be their patron; and besides this, there is a tradition, that the first knit stockings were brought to France from that country. However this may be, it is certain that the first letter of foundation for this guild, named la Communauté des Maitres Bonnetiers au Tricot, is dated the 16th, or, as others say, the 26th of August 1527. St. Fiacre, I shall here remark, was the second son of Eugenius, who is said to have been king of Scotland in the beginning of the seventh century; he lived as a hermit at Meaux in France, and his name in the sacred calendar stands opposite to the 30th of August9 It must however be acknowledged that Savary's conjecture rests only on a very slight foundation.

Some years ago, however, several learned men in England were led, by a singular circumstance, to collect information in regard to the antiquity of the art of knitting stockings.
I here allude to the forgeries of Thomas Chatterton, who was bom on the 20th of November 1732, and terminated his unfortunate life by suicide on the 24th of August 1770. This ingenious youth published some poems which he pretended were written by Thomas Rowley, who lived in the reign of Edward IV, that is about the year 1461. Many literary men denied the authenticity of these poems, though they possessed great beauty; proclaimed Chatterton to be a second Psalmanasar10; and justified their opinion by the circumstance of knit stockings being mentioned in them. This they said was an anachronism, as the invention of knitting stockings, according to Howell and Stow, must be a century later than the supposed poet Rowley. Others, who supported the genuineness of these poems, endeavoured on that account to make the invention older, and collected information in regard to the history of it…

Nothing at all. But wasn't it fun?

1We admire his restraint.2We can't believe the ancient Romans failed to invent the leg-warmer.3This is such a cool statement that we think it should be on a poster.4Many centuries later, the Germans inventively turned this term around to create Strumphose, panty-hose. Ain't etymology grand?5And possibly, that the wearer comes from Switzerland?6So many of civilisation's heroes are unsung.7Author's Note: Dict. de Commerce. Copenhagen 1859, folio 1, pp 388, 576.8Like a trade union.9Author's Note: Gentleman's Magazine, vol liii, 1783, p 38. In the Heiligen Lexicon St Fiacre is improperly called the son of an Irishman of distinction.10George Psalmanasar was an 18th-century Frenchman and a famous 'great pretender': for awhile, he had people convinced he was a Japanese pilgrim. They hadn't seen many Japanese before.