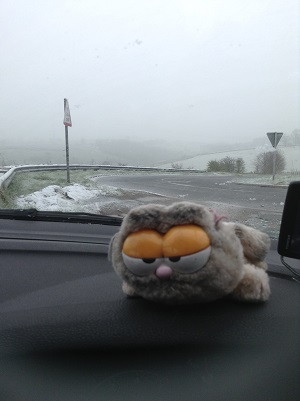 Despite my usual method of transport on the rivers being in a kayak, lately I have quite taken to the thought of the occasional, quiet journey, paddling a boat on some of my local picturesque, inland waterways, while taking in the scenic views and communing with nature's flora and fauna. For me the ideal type of boat for that kind of recreation is the open canoe, more often known as a 'Canadian' due to its similarity to the style of boat that was used predominantly by Canadian tribal Indians of earlier centuries.

Such a boat can carry a greater load than a kayak, indeed everything you might need to sustain a camping journey for a few days, enabling you to 'get away from it all' for more than just a few hours. But where to get such a craft? They are of course quite readily available new through boating outlets and surfing the internet will find 'previously loved' ones if you wish to hunt one down, but all at a price.

It was then, with some surprise one day while surfing the nautical web, that I found an almost unique idea that I had never thought existed. A small business in Cumbria who advertised building a canoe yourself in four days. The promise they made was that with minimal skills, using only unpowered hand tools you could construct a canoe and drive away with it at the end of four days. They would supply the tools and materials, and the know-how, you would do the building under their guidance. Either a single-seat or a two-seat option was available, I decided to give it a try and opted for the two-seater. It's given name is a 'Lakelander'.

I spent the evening prior to the start of the course driving up to the Lake District. The closer I got the colder it became until I was driving through freezing fog and sleet. I eventually arrived in the middle of the night at the pre-arranged meeting point, the car park of a pub in the village of Strickland. Here I spent the remainder of a cold night in fitful sleep in the back of the car until others on the same course started arriving at about 7 am. Once all the introductions and pleasantries had been exchanged we proceeded in convoy about a mile or so to a large farm barn which was the 'canoe factory'. After a first cup of tea (there were to be many more) and an introductory chat that laid out the ground rules, we were straight into cutting wood. 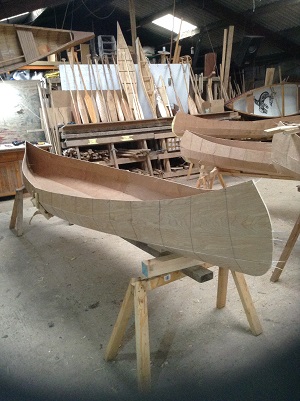 Four sheets of plywood had already been laid out for each of the six boats that were to be made on this course. On the top sheet the shape of the boat panels had already been marked out. By clamping them down onto a bench so that they couldn't move, cutting through all four sheets with a handsaw produced four panels at a time. It was a laborious task and took up most of the morning to get all twelve panels that were necessary for the main frame of the boat out of the wood.

In the afternoon all the pieces were assembled to a jig on two trestles with the central joints screwed down to the jig to keep everything in line relative to one another. Looped lengths of baling twine gradually pulled the boat into its characteristic shape as they were tensioned up. The prow and stern were secured together with cable ties while ensuring that the ends of the boat were exactly central. A bit of judicious pushing and pulling centralised everything into a recognisable, if a bit floppy, 'Canadian'. The last job for the day with the boat still fixed to its jig, was to apply glass-fibre tape to the central crosswise joint and stipple into it a quick-setting epoxy resin. Leaving it to set overnight to reinforce the joint.

Here the first lesson was learned. You worked at your own pace, but you had to keep up with the tasks to keep to an informal schedule in order to get the boat finished in the four days. The advertising blurb had said that you could finish the boat in that time but there were some jobs that were easier with a helper. There was certainly enough time to complete the tasks, and before each step was started a brief demonstration by the two very laid-back instructors showed exactly what was required and how to go about it. Neither of the two were above getting stuck in to assist anyone who looked as if they may be experiencing difficulties and a shout of 'help!' always produced a result.

Coming back on day two, it was encouraging to see the previous day's work in the shape of a boat ,which at least gave the feeling of significant progress. On to fitting the gunwales. These are the strips of ash running the length of the boat from stem to stern along the outer edges of the boat. This really was a two-person job, having to bend the strips into a double curvature to follow the line of the upper edge. It was made easier with a few clamps starting at the centre of the boat and working outwards towards the ends, drilling and screwing as you went. By the time these were in place, the whole assembly was beginning to stiffen up.

To finish that off, more glass fibre tape was applied along the full inside length of the joint lines and a temporary strut to hold the correct width across the widest point of the boat while all these joints set. During the remainder of the day,a start was made on fabricating the bits and pieces that formed the fittings of the boat like carry handles, flitch plates at the prow and stern, and spacers for the seats. 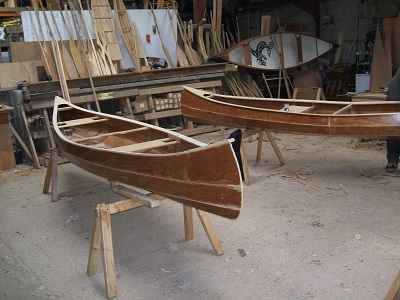 Having set hard overnight, the boat was now a stiff shell and could be released from the jig and flipped over to get access to the underside. The outer side of the panel joint lines were filled with a mixture of epoxy mixed with flour to bulk it out. This was applied with a spatula, working it into the seams to smooth them out and reinforce the joint.

This was a time-consuming job which took most of the morning but after a late lunch it was ready for a complete sanding down to remove excess glue along the seams and prepare the surface for the final major job of applying an epoxy coat to seal the wood. This final job was completed before close of day to allow the coating to fully cure overnight. 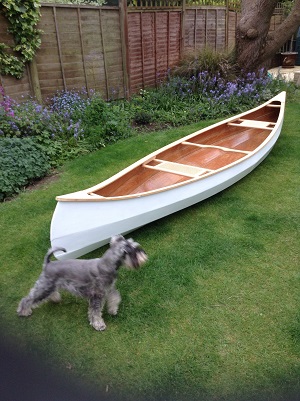 By the morning of the fourth day the finish of a hard, water-resistant coating had sealed itself, and the boat now only required fitting up. The design cost included seats made from plywood, but an option was available to buy professionally-made cane-woven seats and a carry yoke which also acts as the central thwart, albeit at an extra cost. These pre-made parts look far better than the standard parts, and only had to be cut to fit and bolted in.

And so it was that by 4 pm on the fourth day I was strapping the completed boat to the roof of the car for the long run home. Several of the others who lived closer took their boats off to try out on the local lake. I didn't get mine onto the water until a few weeks later, but I took the opportunity to paint the exterior while leaving the interior in its natural wood. Since then I've made a few modifications by way of fitting airbags for greater buoyancy, lowering the seat height for better stability, installing painter lines and cup holders.

On the water, the boat feels quite stable and can be paddled quite easily either seated or kneeling. Personally, I think it looks quite good, and we've named it Alba Ceti. All in all, it's been quite an experience to build and paddle my own canoe. 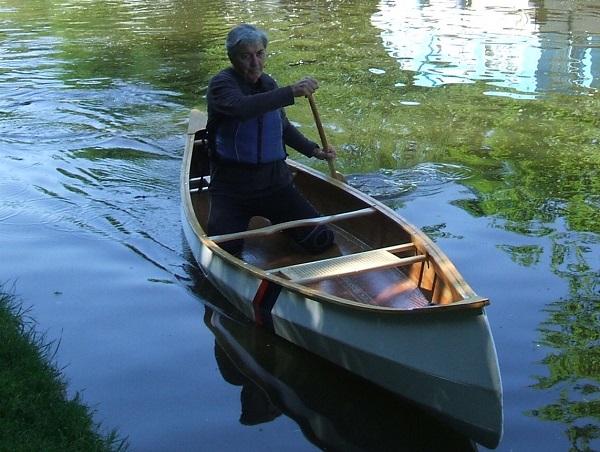