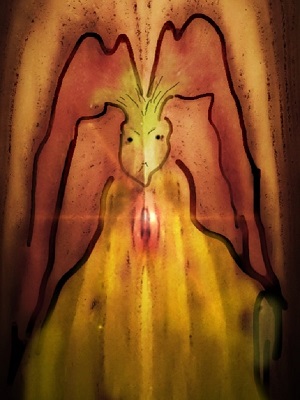 "You the pest controller?" Ralph the caretaker swung the ornate heavy door wider.

"You could say that," said the rather unassuming man stepping in gratefully out of the still falling rain.

"Oh, ok," the caretaker looked down at the soaking wet brogues forming puddles on what was left of the parquet flooring. "This way mate, watch where you're treading."

Rubbing uselessly at his jaw, the man from Delaware followed the caretaker into what was left of the once beautifully splendid pump house of the Victorian Egerton Lido.

The Light looked upon the multiverse and saw that all was well.....what?

In ALL the multiverse?

"Erm, you bored yet?" mumbled the Dark.

"Nope. Not at all. Everything's going swimmingly, actually, really...good."

"Nope. This is my turn, and everything is as it shall be." The Light hastily stifled another yawn.

"Not one little thing you'd change?"

"What about the way the monkeys replace beautiful buildings with concrete monstrosities!" The black forked tongue poked out with the smug grin.

The Light did a quick double check on every beautiful building ever built in the multiverse and saw that they were good.

"Ok, one more, poor guy's been enjoying his retirement for years, too!"

"Whole place due to be demolished if we can't fix this, cost a ruddy fortune it will."

The man from Delaware looked around the crumbling, creaking building, stepping to one side as a piece of rafter fell to the floor, exploding into a million splinters.

He bent down and picked up a small item from the pile of wood.

In his hand a rather fat termite burped almost inaudibly.

"Well, I think we've found the culprits!" He held out the rotund bug.

Ralph grimaced, "Hoping it was dry rot....what by the Queen's beard is that?"

The Horn'ed One felt the rather damp flesh wrap around her worker. Seeing through all eyes of the colony, she beheld the man.

Seeing also into the godly realm, she noted that this creature was special.

Maybe: despite his obvious lack of armour or heavy mandibles, this one gave off an aura of one used to meeting conflict and resolving wars.

Touched by both Light and Dark, this man would be a powerful enemy, one to test her resolve.

"Ouch!" The man from Delaware promptly dropped the fat termite, sucking on his hand, tasting blood, doughnuts and rainwater.

The colony felt the death and stopped eating, saddened and enraged by the screams of their goddess.

War had come to the Egerton Lido.

Every time she used this particular locker, she ended up going home with damp hair, items of clothing on backwards or realising she'd left yet another book at the sports centre.

Something about the grain in the laminate wood finish always had her going off into flights of fancy.

Imagined faces looked out of the wood into her eyes and that was it, another daydream began.

Today was no different.

Well, actually a little different, as the lady had company today.

A visiting friend, a poet no less, had joined her on the swim, intending to sample the famous black walnut cake in the Cactus Café after and then on to brunch with a few Spanish brandies thrown in.

They were to plan a gardening trip to Normandy in the Spring, but conversation often became more fanciful as brandy was sipped and artistic thoughts given breath.

Then there was "the man in brogues".

The mysterious, romantic stranger they'd chatted about, given him a hopelessly romantic back story embroidered with poetic fantasy and schemes of daring do.

They were hoping he'd be there, drinking coffee at the café and being all romantic and mysterious whilst wearing brogues.

But then that locker door. Images whirling in wood and poetic brains.

Something deep and mysterious attempting to be recognised, released....

The Horn'ed One gazed out across the voids.

Two female humans, in varying states of dryness and undress gazed unknowing into her Knot. The Sacred place.

Hidden away after the Final War, banished and covered, untraveled for so many years after the destruction of the colony.

The dormant hive mind stirred as their goddess reached out into this time and place.

A chance of release now presented in the form of the two females. Minds open to mystery and magic.

She watched as the two human Keys walked off arm in arm, hair dripping, a skirt on backwards and several notebooks left unnoticed in the changing room.

The goddess reached out with her mind, determined to use these unwitting Keys.

"So our guy's been imprisoned for over a century in some kind of magic bug cocoon beneath a demolished public baths, lost to Light and Dark, and you want to send help?"

"And the help you, you the Light, the help that the second most powerful being in the multiverse, has chosen..."

"Yadder, yadder...you have chosen, from the gazillions of monkeys, let me see? Ah yes, two middle-aged writers! He is, of course, doomed!"

"Never underestimate the power of an artistic soul, scratch that, double it, you just see ,mister!"

Again, she shook her head.

"No, I meant to say", she took another deep breath, daintily spitting the last of the brandy-flavoured sawdust from her mouth," that was flaming awesome!"

Brushing the remnants of the Cactus Café doorway from her hair, the second grinned back, "Absolutely awesome! I hoped Bexhill would be like this!"

Their second glass of Spanish brandy had been unexpectedly interrupted when the small counter of the café had rather suddenly disintegrated into a pile of writhing sawdust and splinters.

Hastily jamming numerous books back into their handbags, they’d backed away towards the main doors.

The wooden flooring seemed to liquefy as thousands, no, make that millions, of small but very fat bugs advanced towards them.

The sound of wood being voraciously chomped was deafening, even drowning out the latest number one coming from the now-floored speakers, a Heavy Leslie version of Easter Bonnet1.

The charmingly British-sounding bell above where the door used to be hit the sawdust with a distinctly unBritish clang as the façade was devoured.

Thinking quickly, the ladies each grabbed one of the scented candles from a side table and two bottles of Spanish brandy.

Taking huge swigs, spitting the spirit out into the candle flame, the ladies kept the hungry horde at bay.

Bugs crackled in the brandy-flamethrowers' path, explosions adding to the café carnage as sawdust ignited.

Finally, outside, the bottles emptied, they ran off towards the safety of the concrete and glass promenade.

The Light grinned smugly, "You were saying?"

Deep, deep beneath Bexhill, the man from Delaware squirmed in his moist cocoon, flashes of blue flames danced behind his eyes. He knew peril was near, knew he had an important task as yet unfinished.

The warmth enveloped him tighter, sweet whispers from his queen lulled him back to sleep.

"So, let me get this straight; to stop the Victorian baths from being demolished, you released an ancient termite goddess on this reality, hoping our man would stop it, the baths would be renovated, and the seventies concrete sports centre would never be built?"

"In a rather simplified walnut shell, yes." The Light was worried, already the time line for this reality was unravelling without the man from Delaware to keep the Balance.

"So now you’ve got a world ruled by a feline warrior goddess, werewolves in Pennsylvania, the Secrets of the Universes are all over the interwebs, vying for popularity with cute kitteh videos, and even worse, Black Sabbath are releasing Technical Ecstasy next week!"

"I believe, my goodly friend, that it may be time two young ladies had a toothache!"

Returning to the sports centre to recover the forgotten notebooks, the ladies eyed the wooden-fronted lockers with suspicion. Both rubbed at aching teeth – must’ve been all that brandy spitting?

"Lovely, aren’t they?" the assistant manager beamed, "The laminate was actually made from the reclaimed floor joists of the old Egerton Lido pump rooms, sadly the only part that could be saved. Totally ruined by such tiny creatures, would you believe? Apparently, the pump room was where the woodworm, or whatever, where the nest was, so they, the bugs, didn’t destroy it, so, well, we have lovely lockers as a result! Strange the way fate works, isn’t it?"

She gave another dazzling beam as the ladies left, two pairs of immaculate brown brogues echoing down the corridor.

The Horn’ed One trembled in her anger.

The captive male no longer of import, but these females may yet threaten her dominion.

The Sacred Knot was protected, hidden in another place, another time.

Another week and the very world would be devoured by her children.

She watched through the laminated wooden knot as the females departed.

Skirting the empty Lido, they made their way towards the ornate pump house buildings, stopping frequently to shake the freezing rainwater from their unexpectedly new footwear.

"So..erm, do we actually have a plan? Do we know what we are actually doing here, wherever here is?"

"I’ve seen old photos of this place, a kind of pleasure dome by the sea. A Victorian Xanadu!"

"So, we break into Xanadu, find the joists that will, or will have, going to be erm…"

"Destroy the lot, kill the bugs before they eat the place!" She fished another couple of brandy bottles from her bag, handing one to her friend.

"Save the world!" The poet lifted the bottle in salute.

"Save the Cactus Café! Cheers!"

In a beautiful garden in Delaware an unassuming man sat carving an intricate model of a pair of Victorian bathers.

He gazed at the small heap of shavings and sawdust by his warm and very dry slippered feet.

His mind was momentarily and inexplicably troubled by the sight.

He stretched lazily, enjoying the absence of toothache and the need to be doing anything.

Sipping his coffee, he breathed in the fragrant air and wished it could be this peaceful forever.

The Light smiled gently, "As you say, that’s it; for him at least. But the multiverse will always need Balance, and we now have two to oversee that it is/was/shall be."


"I think I might miss him …a little." The Dark grinned, rubbing its claws together,
"Now, apart from burning down a Public Baths, let’s see what your ladies can really do! My turn?"

(At least in several Realities it is/was/will be.)