Meanwhile, in an alternate universe, somewhere in Pennsylvania. . . 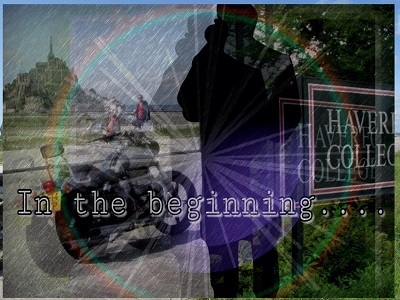 Trudging up Walnut Lane, towards Haverford College, the unassuming man stooped to tie his laces. Brushing a stray leaf from his immaculate brown brogues, he breathed deep the Spring air.

The only nuisance blighting his immaculate plans was an awful toothache he had suffered for the past two days.

Wednesday morning, he'd been supervising a field trip to the Museum of Indian Culture in Allentown, one minute he'd been directing the class to a rather interesting display about Lenape Creation myths, the next, for some bizarre reason, he'd momentarily found himself standing in a downpour outside what appeared to be Mont Saint Michel, Normandy, France...erm Europe.

He gazed, befuddled as six rather scruffy English motorcyclists were screamed at by an immaculate but rather irate French site manager.

Then, just as befuddled, he was back in the museum, passing around sacred artefacts and thanking the exhibitors for a wonderful presentation.

On the school bus back he had suffered the worst toothache ever.

He'd managed to obtain an emergency appointment at Fairview Road (curiously choosing the seventh-best dentist listed in Delaware), the surgeon assured him his teeth were immaculate.

Driving back from Woodlyn, the toothache struck again, much, much worse.

Pulling off the 476 in rather a hurry, he popped a few Advil and tried to ignore the pain, what he failed totally to ignore, however, was the traffic swerving to avoid him as he stood in the middle of a roundabout intersection in what suspiciously looked like Piccadilly Circus, London, England...yup, Europe.

He threw his hands up to protect his face as a red London Bus steered by a rather small but extremely rotund driver bore down on him at an alarming speed.

Suddenly he was not actually dead. Not, in fact, squashed on a rain-soaked London street by a rather late bus driver.

The 'arghhhh' hung around, rather embarrassed, feeling a bit silly to be echoing around an unassuming man's rather immaculate Prius.

Although the now excruciating toothache did actually make the arghhhh feel a little less redundant.

"I'm going mad!" He though as he drove home to drink wine in his immaculate garden.

The Light grimaced, "I think he's going to be perfect, immaculate, and I love those shoes! Let's keep him?"