It's Christmas time, and we all think of Merry Olde England, even if we have no roots there. Which doesn't make any more sense than this snarky story by Thackeray, but we thought you'd enjoy it.

Our House in (the Middle of) Our Street

From The Christmas Books of Mr MA Titmarsh, by William Makepeace Thackeray. 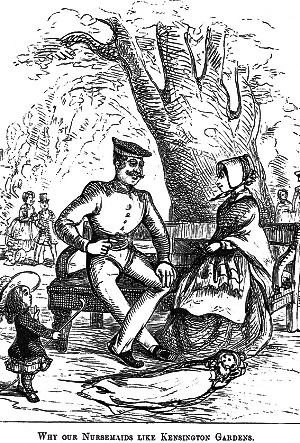 We must begin our little descriptions where they say charity should begin – at home. Mrs. Cammysole, my landlady, will be rather surprised when she reads this, and finds that a good-natured tenant, who has never complained of her impositions for fifteen years, understands every one of her tricks, and treats them, not with anger, but with scorn – with silent scorn.

On the I8th of December, 1837, for instance, coming gently down stairs, and before my usual wont, I saw you seated in my arm-chair, peeping into a letter that came from my aunt in the country, just as if it had been addressed to you, and not to A. Titmarsh, Esq. Bid I make any disturbance? far from it; I slunk back to my bedroom (being enabled to walk silently in the beautiful pair of worsted slippers Miss Penelope J–s worked for me : they are worn
out now, dear Penelope!) and then rattling open the door with a great noise, descending the stairs, singing Son vergin vezzosa at the top of my voice. You were not in my sitting-room, Mrs. Caminysole, when I entered that apartment.

You have been reading all my letters, papers, manuscripts, brouillons of verses, inchoate articles for the "Morning Post" and "Morning Chronicle," invitations to dinner and tea – all my family letters, all Eliza Townley's letters, from the first, in whieh she declared that to be the bride of her beloved Michelagnolo was the fondest wish of her maiden heart, to the
last, in which she announced that her Thomas was the best of husbands, and signed herself "Eliza Slogger"; all Mary Parmer’s letters, all Emily Delamere's; all that poor foolish old Miss MacWhirter's, whom I would as soon marry as: in a word, I know that you, you hawk-beaked, keen-eyed, sleepless, indefatigable old Mrs. Cammysole, have read all my papers for these fifteen years.

I know that you cast your curious old eyes over all the manuscripts which you find in my coat-pockets and those of my pantaloons, as they hang in a drapery over the door-handle of my bedroom.

I know that you count the money in my green and gold purse, which Lucy Netterville gave me, and speculate on the manner in which I have laid out the difference between to-day and yesterday.

I know that you have an understanding with the laundress (to whom you say that you are all-powerful with me) threatening to take away my practice from her, unless she gets up gratis some of your fine linen.

I know that we both have a pennyworth of cream for breakfast, which is brought in in the same little can; and I know who has the most for her share.

I know how many lumps of sugar you take from each pound as it arrives. I have counted the lumps, you old thief, and for years have never said a word, except to Miss Clapperclaw, the first-floor lodger. Once I put a bottle of pale brandy into that cupboard, of which you and I only have keys, and the liquor wasted and wasted away until it was all gone. You drank the whole of it, you wicked old woman. You a lady, indeed!

I know your rage when they did me the honor to elect me a member of the "Poluphloisboiothalasses Club," and I ceased consequently to dine at home. When I did dine at home, – on a beefsteak let us say, – I should like to know what you had for supper, You first amputated portions of the meat – when raw; you abstracted more when cooked. Do you think I was taken in by your flimsy pretences? I wonder how you could dare to do such things before your maids (you a clergyman’s daughter and widow, indeed), whom you yourself were always charging with roguery.

Yes, the insolence of the old woman is unbearable, and I must break out at last. If she goes off in a fit at reading this, I am sure I shan't mind. She has two unhappy wenches, against whom her old tongue is clacking from morning till night: she pounces on them at all hours. It was but this morning at eight, when poor Molly was brooming the steps, and the baker paying her by no means unmerited complients, that my landlady came whirling out of the gronnd-floor front, and sent the poor girl whimpering into the kitchen.

Were it but for her conduct to her maids I was determined publicly to denounce her. These poor wretches sbh causes to lead the lives of demons; and not content with bullying them all day, she sleeps at night in the same room with them, so that she may have them up before daybreak, and scold them while they are dressinig.

Certain it is, that between her and Miss Clapperclaw, on the first floor, the poor wenches lead a dismal life.

It is to you that I owe most of my knowledge of our neighbors; from you it is that most of the facts and observations contained in these brief pages are taken. Many a night, over our tea, have we talked amiably about our neighbors and their little failings; and as I know that yon speak of mine pretty freely, why, let me say, my dear Bessy, that if we have not built up Our Street between us, at least we have pulled it to pieces.