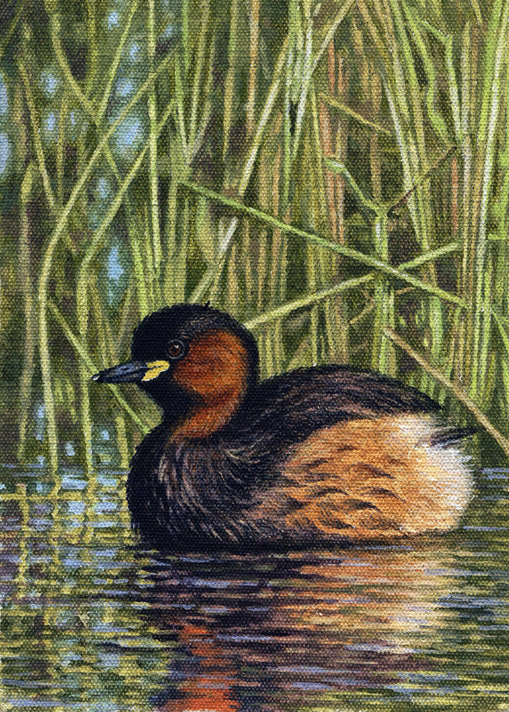 This time I have for you a lovely little waterbird! It is a Dabchick, Tachybaptus ruficollis. The scientific name means 'rufous-necked fast-diver'. Dabchicks are members of the grebe family, and the species is enormously widely distributed. It occurs in all suitable wetland habitats in Africa and Madagascar, as well as in much of Europe, the Middle East, and southern to eastern Asia. It is replaced by similar and closely-related species in Australia, New Zealand, and the Americas. In South Africa this is one of the most common of all aquatic birds and can be seen even on small ponds, occurring inland as well as in brackish waters in river estuaries along the coast. Tiny as it is (reaching a stretched-out length of 20 cm/8") it doesn't need much for survival. Dabchicks are easy to spot, being smaller than any duck or other waterbird species. They usually appear small and dark; they dive often, are gone for a surprisingly long time, and then resurface a good distance away. They seem to spend as much time, if not more, underwater than on the surface. In the breeding season, both sexes develop the bright rufous colour on their heads and necks; outside of the season, they're much duller, a greyish-brown all over.

Grebes are very unusual birds, and for long it's been unclear to which other birds they're related, because they're so highly specialized for an aquatic existence. We now suspect that they're closely related to flamingos. They're remarkable in many ways. All of the larger grebe species have wonderful and even comical breeding displays, where the male and female dance together, performing various moves in synchrony. The various crests and feather tufts these grebes have on their heads and faces, give them very characteristic and striking personalities. Interestingly, both male and female grebes of all species are similarly adorned, without visible sexual dimorphism, and they also perform the same moves in their courtship dances. In terms of evolution, this means that sexual selection pressures go both ways: not only does the female choose the male for his handsome plumage, but also the male prefers similarly handsome females.


In the smaller grebe species, like the dabchick, these displays are somewhat more restrained. Swimming side by side, they shake their heads and preen themselves. The male may also chase the female a short distance over the water, excitedly uttering its trilling call. On the nest platform, they ritually present to each other bits of food, or aquatic weeds. This signifies that they will help each other with building the nest and feeding the chicks.


Grebes are funnily built. They're very front-heavy, with rather big heads carried on long necks; they have hardly any tails, and their legs are placed right at the rears of their bodies. This is because of their swimming lifestyle; set at the back, their legs can efficiently propel them through the water like the outboard engine of a boat. Their toes are not webbed like a duck's, but each toe is individually fringed with a wide lobe. They move their feet in a figure-of-eight pattern as they swim. Their plumage is very dense to keep the water out; the body feathers look somewhat like hairs or fur. They have short wings, but most can fly effectively and sometimes for long distances. A few species have become flightless (and sad to say, many of the modern flightless grebe species are today already extinct). Dabchicks are some of the better fliers, and use this ability to reach new, distant lakes and wetlands in seasons of good rains.


The different grebe species have different feeding methods, all of them feeding on aquatic critters, with some targeting fish, others feeding on small water invertebrates, some even hunting hard-shelled crabs or crayfish. Dabchicks, as you might suspect, feed on small water-living thingies, such as insect larvae, water-snails and other molluscs, tiny crustaceans, fish or tadpoles. They hunt by picking them from the water surface, or grabbing them underwater. Dabchicks often join other waterfowl. They can catch some of the smaller things that are scared away by the ducks and bigger things. Indeed they even follow hippos, and have been seen taking leeches off the skin of semi-submerged hippos. A very unusual habit of dabchicks is eating some of their own feathers! At present we don't know why they do this.


As I've said, dabchicks can fly well, though they have to patter on the surface a bit before becoming airborne. They do lose some of their flying ability during the yearly moult which happens outside of the breeding season. During these times they are vulnerable, and tend to gather in big groups on large lakes, staying well away from the shores.


The dabchick breeding season can actually be anytime of the year, but in most of South Africa it is mainly in summer after good rains have fallen. After the courtship, male and female build the nest, a big, floating platform of leaves and stems of aquatic weeds, reeds and other vegetation. These platforms are usually anchored to reeds or submerged plant stems. Sometimes they're hidden beneath overhanging trees of bushes, or between reeds, but they can also be out in the open. The two to five eggs are laid on top. Both parents incubate them. Sometimes the nest is left unattended for short periods, but if so, the parent on duty will scrape some of the nest material over the eggs to hide them; when they return, they quickly uncover the eggs again and resume incubation. When returning to the nest, they'll take their approach by swimming from a long distance underwater, then popping up beside the nest. They'll first look one way and the other to make sure there's no danger before they climb up onto the nest. When a predator or other threatening animal approaches the nest, the dabchick parents will splash water at it.


The chicks are delightful. They have round bodies covered with soft down with a lengthwise pattern of dark and light stripes. They can swim from the start, with their big, lobed feet and their tiny wings stretched sideways to stabilize them. Dabchick chicks also often ride on their parents' backs, at least for the first few days of their lives. They soon become able to hunt fully on their own.


At present, dabchicks are abundant as well as widespread, actually having benefited from the many artificial lakes and ponds created by humans. They are thus in no immediate danger of extinction. These charming little swimmers are easily seen but very worthy of being watched for a while.