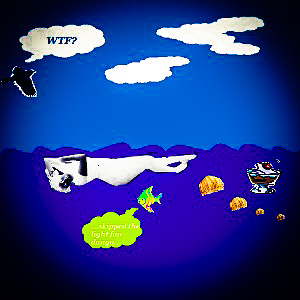 The wave broke over my head. I was immersed in a saltsea swirl.

My brain exploded into visions.

Several recipes for blackberry and apple crumble, each with a secret ingredient, appeared behind my eyes.

I encountered an absurd lime green fish which spoke only in incomprehensible bubbly whispers.

If this was my farewell, I was unimpressed.

I expected at least one angel. Or even a cosmic realisation.

What use was blackberry and apple crumble to me now?

The naked sun worshippers on the beach hadn't even looked up.

They'd surely have rescued me if I was drowning. 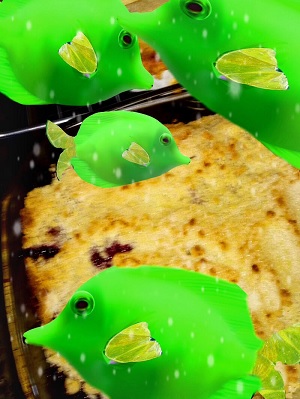 It turned out I was underwater for less than twenty seconds.

The wave was in fact tiny. To a surfer it would have looked like a ripple.

It appeared without warning from out of an otherwise calm sea.

Later, I imagined the write up in the paper.

Hopefully they would have spared the photographs.

I have tried to make sense of the incident over the last few years.

I have spoken sternly to my higher self, requesting significant insights should my life flash before me again.

However, just the other day I was swimming in the sea and I remembered the lime green fish.

It made me laugh so much I almost went under another wave.

The laughter was a tonic. At last I understood! Why the weighty search for meaning?

('Quite so!' agreed the fish in an almost incomprehensible bubbly whisper.)