Part of what we remember from childhood is what we thought the grownups were up to. This gets interesting when you look back at history, and read about children of the past. Sometimes they witnessed some unusual, and possibly unedifying, adult behaviour.

This extract is from the book Days of Elk and Buffalo: A Colorado Childhood by Florence Hayes Turner. 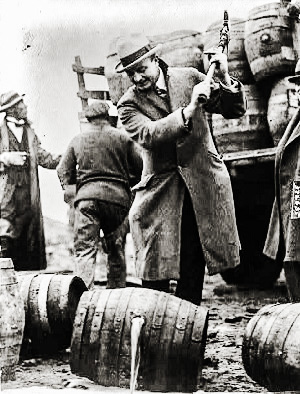 Even as children, we were all familiar with Prohibition, our acquaintance with this negative social experiment beginning and ending on the wrong side of the law. Growing up in the era of the furtive knock, the eye at the speak-easy grill, or the wine-filled teacup, hastily hidden, might in itself have served as introduction; but in addition, our awareness was strongly fortified by the frequent smell of jumper berries and gin in our own bathroom, while in Colorado Springs we had become accustomed to the regular visits at our Broadmoor house of a small man with a large suitcase. By his own statement, he was a salesman for various brands of cereal, but we heard denial in the faint clinking sounds issuing from his heavy case and grinned at one another as the study door closed behind the visitor and my father.

The ring at the door-bell always came around supper-time, but if any of us happened to be looking out of the window at the time we would know in advance of the man's arrival, since he
always parked his car a block away on the opposite side of the street. After fifteen minutes or so, we would hear my father's cheerful voice as he sent the visitor on his way, and waited expectantly for him to join us at the table, knowing that the atmosphere would be enlivened as a result of his brief sojourn in the study, and that his blue eyes would show an extra sparkle.

'Straight off the boat!' he would say jovially, and the phrase became synonymous in my mind with a feeling of general good humour. Although it was not for a long time that I understood its real meaning, I feel now that my own interpretation is still the more accurate one, since it is highly unlikely that our 'cereal salesman' procured his stock at any time straight off a boat from
Scotland, or that my father by his words was disclosing anything more than wishful thinking. It was enough, no doubt, for him to realise that his cupboard was no longer bare of whisky, either
genuine Scotch or some more dubious domestic brand.

There actually was a large cupboard at the head of our front stairs, supposedly a linen closet, but the presence of a Yale lock and the fact that no one but my father or my stepmother was
allowed to enter revealed the main purpose it served. Despite the lock, burglary was committed by an ex-groom of my father's, Jack Malloy, a loose-jointed Irishman, whose craving for hard
liquor and the exaggerated manner in which he periodically satisfied this craving eventually drove my father to end their association.

On this occasion, Jack's thirst overcame him about three o'clock in the morning, and with a cunning born of fierce desire he entered the house through a window, forced the lock, engaged
himself with the contents of the closet, then spoiled everything by falling down the stairs with a clatter and crash that brought us all running from our rooms. My father stood at the head of the stairs in his dressing-gown, gazing down sternly on the thief, who was so far gone in his wits and so lacking in criminal savoir faire that he could only sit mournfully on the bottom step, wagging his head in repentance and murmuring that he was sorry.

Ed. Note: Prohibition had a lot to answer for in the law-breaking department. Also in making parents a bad influence on their kids.