"So let me get this straight, Billy," Farrell pretended to think, holding his upper lip, desperately trying to block the stench of the flat from getting further up his nose, "These 'grey people' live under the Proddy cathedral and come out to eat every few weeks? Yes?"

"They live underground. Come out to feed. I leave them animals, dogs, cats, and whatnot,they seem to like rabbits best, leave me alone if they're fed. Cause all kinds of problems for you guys if not, missing persons and whatnot, not really missing are they? Really terrible stuff happens if they're not fed properly. Been here forty two years now, not one bit of trouble since they took my first dog, collie she was, lovely girl, can't remember her name now, things get a bit confused and whatnot, you know – names and things, I don't name them any more, just food, that's all, food and whatnot for them now. But they leave us alone. Where are my manners? I forget things so easily these days. Would you like a cup of tea or whatnot?"

Once outside they gulped in the fresh air, Farrell shut his notebook and muttered about what a waste of time that minger was.

His sergeant grinned, "Mad as a box of frogs, check with the Social when we get back to the Nick. See if he's on the register, maybe get him some help...or Whatnot!"

Two other house-to-house calls and they were back at St Anne Street, drinking coffee and comparing notes about the weirdos they'd met when the boss walked in.

"Right ladies and gentlemen, firstly, I apologise for the smell of garlic, secondly, we may have a forensics lead, admittedly a bit of a strange one, but a lead nonetheless. Any Officer hearing anything about.." He paused and took a deep breath, ready for the barrage of jokes, "...ahem, anything about rabbits or wild animals with claws, I am to be informed immediately, otherwise keep on with what you've been assigned to."

Not one laugh, no jokes. Davies was puzzled, not the usual police reaction to an easy target on the boss's head.

"Er, I think we might have something, Boss," Farrell was already leafing through his notes, trying to recall Mr Whatnot's address. 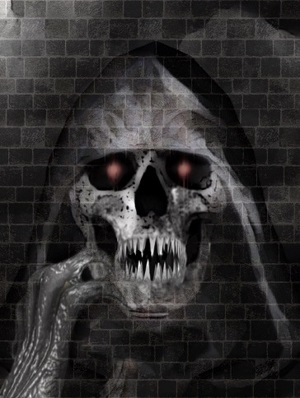 Joseph had used the excuse of needing a larger wine cellar to start his great works. Subterranean passageways would keep George out of trouble's way. He had discovered over the months that with each feeding George became more corporeal, solidifying with each meal.

When hungry, however, he became wraithlike, able to pass through Joseph like an icy shadow. Cavern walls however seemed to be impenetrable to the wraith.

Joseph pulled the recessed lever and waited whilst the cellar wall revolved, a lovely piece of engineering, he admitted. Lighting the torch he entered the gloom, the smell overpowering as he sought to distinguish his brother from the other shadows.

"Yesssss!" Came the hissed excited voice from his right.

"Look Georgie, your favourite," he held up the four hares, "There's enough to keep you fed for a while, brother, Joe's got to go up north for a day or two, you'll be fine down here, won't you?"

Grey talons gripped the closest animal, snatching it into the shadows. Joseph tried not to grimace as the tearing and crunching started, wet slurping sounds soon followed.

"Don't eat these all at once, eh? I'll be back before you get hungry again."

He left the three hares by the entrance and carefully closed the walls.

Joseph left Liverpool and set off for Yorkshire in the pouring rain.