Billy was worried. For three nights now the animal had been staked out in the backyard. Untouched. Probably dead of hunger or thirst by now, but still untouched. The rabbit lay still in the twilight. Billy worried some more. His thoughts the usual jumble in his head.

If the food wasn't touched the grey would be feeding and whatnot somewhere else, what if it was waiting for him? No, he was safe, surely they wouldn't bite the hand that fed them, kept their secrets? What if it had found a school or old people's home or whatnot? Some other poor defenceless meal? His job would be over for sure. If they didn't need him anymore. But what if they came for him?

Billy was still worrying when the knock on his door forced him away from the view.

Must be someone flogging something or whatnot, greys don't knock. But no one ever called. No family, no neighbours or whatnot. Didn't need the hassle. More important things to do than natter to people who didn't appreciate the importance of his job. Keeping them safe with not a word of thanks. Spending his dole on bloody animals, living on beans and whatnot, no thanks. No thanks at all.

Billy opened the three locks, careful to check the chain was still in place and opened the stiff door a crack.

The visitors visibly winced as the fetid air in the room escaped.

"Evening, sir," badge and id displayed, "I'm DC Farrell, this is DS Cleghorne, do you mind if we ask you a few quick questions about the building site at the back of your, erm, premises?"

Joseph stood at the docks, breathing in the river air and delighting in the hustle and bustle of the great port. He retrieved his bag and set off to find a boarding house, he had two days before he started his new job and meant to make the most of his free time before his new life began. He adjusted his coat, careful to check his money was safe from the numerous pickpockets in Liverpool and strolled into the town.

He had looked back at his family home not once after the will was read and his parents buried. Died of grief most said, simply couldn't go on. Within a week of their son's disappearance they had simply gone to bed, neither waking up again.

With George gone too, Joseph was the sole beneficiary. The business and house he sold immediately, investing most of the funds into a small trading company based in London Road.

Within a week news came that the company had had great success acquiring land overseas, the market had boomed at the same time and orders were flooding in. Joseph's investment had multiplied a hundredfold in just five days. He had simply packed a bag and left Yorkshire that very day.

He had instructed his solicitors to invest the profits into shipping, transport and storage. Again, miraculously, each and every investment had paid off with massive dividends. Bankers were keen to fete this young genius of the business world, investors and innovators flocked to seek his support and funds.

So it was that at the age of eighteen Williams House was constructed just outside the city, the estate giving him commanding views of the river. Not twelve months after arriving in the port, Joseph Williams saw in the new century as a millionaire.

He sat in the huge study, inspecting ledger after ledger, the figures mind boggling as he computed his worth. He lifted a glass of port to his reflection in the bottle. "Happy New Year!"

His palm began to itch interminably as the room seemed to chill and then the candles gutted.

Joseph could see his own breath in the light from the hearth, the roaring fire doing little to ease the sudden iciness of the room. He moved closer to the flames, peering into the gloom, looking for the bell to summon a maid. 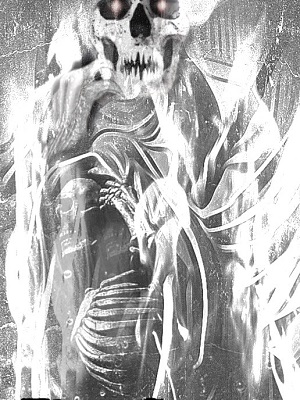 From the darkened corner emerged a thing of nightmarish horror. Grey shadows cloaked the beast, a smell of death and corruption came from its razor toothed maw. As it raised an arm, he saw its fingers, bone and nail fused into curved dagger-like talons. The hooded face merely shadow filled with teeth, the gleam of evil shone from sunken eyes.

Joseph's stomach turned to ice, was this the price he had to pay? Given a taste of success only to be murdered by this apparition?

The creature advanced, the decaying grey cloth whispering across the polished floor. Joseph screwed his eyes shut, not able to witness his own end. He felt the cold envelope him as the beast reached out those dreaded claws.

Instead of agony, Joseph was astonished when the creature simply wrapped him in its embrace, cold fetid breath on his cheeks as the beast hissed out crude but unmistakably human words.