Joseph threw the brandy glass into the hearth, alcohol throwing up great blue flames that matched his drunken anger perfectly. Another damned setback, more delays, time as ever his bitter enemy. The faint scar in his left palm itched, a almost constant reminder these days.

Twenty years had passed since he had struck the deal, twenty years which had seen his fortune and standing grow to vast proportions. Twenty years of regret at the dreadful cost. Twenty years of heavy drinking, worry and searching had however taken their toll, now in his thirty-sixth year, Joseph Williams looked and acted as a man far beyond his years.

Not that his appearance, or anything else for that matter, would be of concern after his fortieth birthday, three years hence on March the tenth 1809. He looked drunkenly around his opulent study. Each and every day he surveyed his empire and cursed the wealth and recognition he'd eagerly bargained for as a young lad.

A millionaire, cotton magnate, a lauded philanthropist Joseph liked to think his schemes and building works benefitted many of the lower class slum dwellers of Liverpool, not bad for the second son of a lowly glass-blowing Yorkshireman.

Indeed, deep,deep below this very mansion he had three hundred men tunnelling night and day, decent pay for those who would otherwise be drunk in the riverside taverns or Imprisoned in one city jail or another. His tunnels, although beautifully fashioned were the cause of his latest drunken outburst.

Of the original thirteen planned, only three had uncovered anything remotely promising. The others now converted to subterranean follies. A church, school, constabulary and even a railway siding dwelt alongside vast wine cellars and dormitories.

He knew the locals thought him eccentric at best, a drunken lunatic at worst, but while he was putting food and drink in their bellies no one questioned his plans. Speculations that 'the mad mole' was a member of a religious sect planning for Armageddon were rife in the city.

Now one of those had succumbed to the forces of nature, unseasonal storms and the fledgling tunnel had collapsed as rainwater flooded down into the labyrinth. Fifty yards of tunnel swept away in a matter of minutes.

The Foreman of works stood, cap in hand, as Williams ranted. He knew better than to interrupt one of his employer's drunken rages. Merely stood patiently until the storm passed or more alcohol dulled the anger.

True to form ,Williams uncorked another bottle and finally allowed Birkett to finish his report.

"The lads have cleared the pipe Sir, floor's gone but, well they've found something" Birkett paused to judge the reaction, " Something I think you'll be glad of, Sir."

"For Heaven's sake man, spit it out!"

"The floor collapsed in the rain , but not because of the rain, because of what we found underneath, I believe we may have stumbled upon something very old Sir, just what you've been digging for!"

Ten minutes later Williams sat content, puffing on a huge cigar, savouring a brandy and thinking that at last after so many years he was finally making progress.

Hunched over his drawing table, squinting in the flickering candlelight, he traced the outline of the ancient passageway with trembling fingers, moving ever downwards towards James Mount and the river.

Maybe, just maybe, he could actually survive the deal, his fortieth and break the deal with the Devil himself? 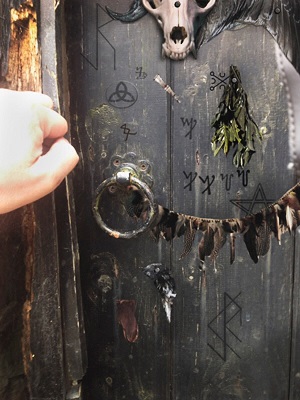 George looked up from the well thumbed pages. Mind far away from the Dales, deep in contemplation as he struggled with his scripture.

"Sorry Joe, I'll finish it later, sorry." Stooping to pluck a strand of grass, George carefully bookmarked the page and hurried to catch up with his younger brother.

Although he was older by some three years, George readily accepted his little brother as the dominant sibling.

Chalk and cheese they were. Joseph bold and ambitious, thoughts of capitalising upon the changing tides lapping at the Empire. Desperate to be away from the little village, keen to stamp his mark upon the rapidly changing world. His talk of joining the new Australian penal workforce, reaping the workforce shortage that the much talked about abolition would obviously see, sailing off to join the conflicts raging in the Americas, the list was endless and Joseph wanted a taste of the high life, or at least big city life in Leeds or York.

George, on the other hand had his future mapped firmly in the idyllic countryside through which they now ran. His fathers glassworks held no interest. George had a calling. The tiny chapel held more promise for him than any glittering city or faraway lands. Money meant nothing, he had quite simply been put on this Earth to serve the Lord and no amount of mocking and cajoling by his brother could dent his resolve.

Chalk and cheese definitely, but their love for each other made any and all differences unimportant.

As they neared the woods the six blue flagons clanging noisily in the crate set birds aloft. The screeching murder echoing around the clearing but silenced to a murmur as the canopy thickened.

"See the old one has sent out her children George, careful they don't snatch that bible from your pockets!"

George knew he was being teased but subconsciously touched the book, warm and safe against his chest. Crows born of a witch made him shudder, such an abomination could not be true. Let the Devils fly, they were powerless against his Faith.

Still he crossed himself as the ramshackle cottage came into view, tales of the old lady and her supposedly magical powers had been told around the candle for as long as he could remember. Simply a woman who preferred her own company and understood the medicinal properties of the woodland plants, George reasoned. Witchcraft was rife for sure, but not in his own devoutly Christian neck of the woods. Yorkshire was and always would be God's own country.

Joseph set the crate on the rotting porch. Steeling himself he gave three loud raps on the doorframe, unwilling to touch the door itself, a hideous portal, strewn with strange symbols, bird skulls and scraps of leather.

He tried not to flinch as the door flew inwards and Old Mary beckoned him inside.