The Greys, Part I

Billy Morris flicked off the crumbling light switch. Careful to avoid the slightest chink of light showing, he risked another peep through the rancid net curtains down into the grey backyard below.

The cold glass fogged in the breath from his over large nostrils, as face pressed against the dirty window, he struggled to make out the shape of the rabbit.

Energy uselessly wasted in trying to escape from the hard plastic zip ties that bound it, the poor creature simply lay, wide eyes frightened, as night fell over Cable Street.

A subtle change in the shadows registered with both the rabbit and the old man who watched. The shadows deepened to a dark grey, sinuously testing the cold flag stones, moving ever closer.

The animal, sensing predator, twitched feebly against the restraints, using the last frantic beats of its heart to avoid the death which now loomed over it. Eyes bulged as the shadow engulfed it.

At the window the faint sounds of tearing flesh and crunching bone reached Billy's ears. He shook his head, sad for the rabbit but content the grey had been sated. At least for a week or two.

Still it was hours before Billy could relax, sure the greys had departed, curling upon himself in stinking sheets.

With first light peeking through the grimy curtains Billy Morris finally allowed himself a brief few hours of fitful sleep.

A few hundred yards south, as dawn broke, grey shadows returned to the catacombs beneath the cathedral.

He swung a foot at the Coke can, cursing as his shoes slipped on the sodden ground, anxious that the young uniforms hadn't seen him miss his target.

He cursed again as the young officer lifted the tape and beamed a good morning to him, Christ how old were these kids nowadays? Maybe he was just getting too old, a dinosaur amongst the cheery new mammals that were rapidly taking over his world.

Still, at stupid o'clock on a Sunday morning, when a decaying body was found (and why did dog walkers always find stiffs - twenty three years on the force and he was still amazed at how early these buggers got up to walk their mutts?) Unfailingly it was always the dinosaurs that were dragged out of bed, grumpy and hung-over.

He eagerly accepted the lukewarm coffee, paused to light a fag before trudging down the slope to greet forensics.

"Morning Boss, pretty nasty one over there, looks like a dog or something, maybe rats, got to him before us."

"Still bloody nighttime Sarah!" He managed what passed as a smile, "what delights do you have on this fine day of rest for me?"

The young SOCO recounted her findings so far. White male, late twenties, t.o.d. probably two, maybe three at a push, days earlier. Multiple lacerations causing heavy blood loss, left arm shredded to bone, throat partially torn away, damage to arm and neck maybe down to PM scavengers. Cause of death unknown but probably down to blood loss. Judging from the lack of blood on in the grass, probably killed off scene and dumped here. 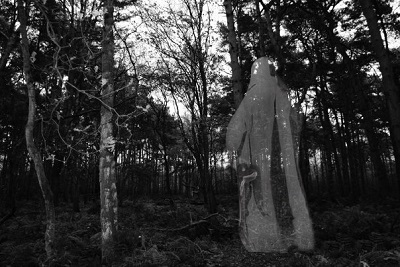 "None at scene, judging by the remains, maybe something with a deeply serrated blade, pretty bloody frenzied attack too."

She handed him a plastic exhibit bag," Wallet, cards, cash, there's a drivers licence, student union card. Definitely not a robbery, his watch was still on what's left of his wrist. Expensive make too. Seems Mr..." She paused to check her notes, "Seems Mr. Martin Stewart Hill wasn't short of a bob or two!"

"Thanks Sarah, probables and maybes aside," He forced down the last of the coffee, "Let's get to work and find out who actually did this to Mr. Martin Stewart Hill eh?"

"Get to work?" She faked a scowl, "Some of us have been working since five o'clock!"

With her point made she led the way down the slope into the grounds of the cathedral's cemetery, hoping to herself that the bloody cocky dinosaur would slip and end up on his backside.