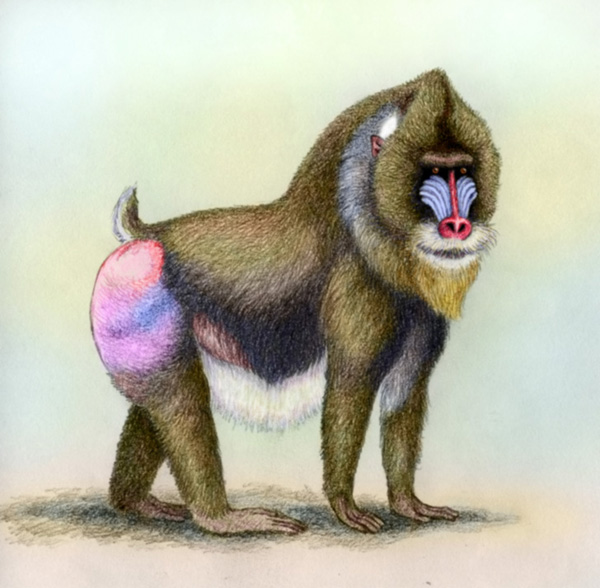 A totally iconic monkey-face for you this time! This is of course a male Mandrill, Mandrillus sphinx. Mandrills must rank as the most colourful of all mammals. In addition to their bright red-and-blue faces bordered by yellow beards, they're as colourful on the other end, with naughty bits and huge, bare buttocks coloured red, pink, purple and blue. In addition they're also among the largest of monkeys, the males ranging from 19 to 30 kg/40 to 66 lbs in weight, with some zoo specimens (who tend to being overweight as a result of inactivity) being even heavier. They're comparable to the largest of Olive and Chacma Baboons. Mandrills are frequently displayed in zoos for being so spectacular, but sadly they're quite threatened in their native forests in equatorial Africa. A mandrill character appears in the Disney movie 'The Lion King', in an entirely uncharacteristic savannah setting that looks to be in East Africa, far away from their actual range and habitat.


Baboons of the Rainforests

A mandrill is indeed a kind of baboon, which you can tell by the shape of its skull and body. Mandrills, together with drills, however constitute a specific, distinct group among the baboons, specialized for rainforest-living the way the Geladas are specialized for grazing on mountain pastures. Both mandrills and drills for instance are adapted for highly-visual displays of their faces and backsides. Their bright colours (and in the drill's case, the contrasting black-and-white of its face) are to enhance visibility in the dimness of the forest interiors. Like other baboons, they're mainly ground-living, not adapted to rapid clambering and leaping around in the canopies like other forest monkeys. Both the drill and the mandrill have only the merest stubs for tails. Aside from their colourful bare parts, mandrills are covered in grizzled, greyish to brownish-tinged-with-green fur, which can be quite long and shaggy in the male, which seems a bit strange for a mammal that lives in year-round hot and humid rainforests.


As in drills, female mandrills are much smaller than the males, reaching only 15 kg/33 lbs in weight, and having much smaller heads with far less prominent ridges on their snouts. Their colours are also muted to a dull red on the snout, and dusky slate-blue on their facial ridges.


Male mandrills actually have a very hard life. At first it may not seem so. A full-grown mandrill male may command a harem of up to twenty adult females, all loyal to him. In such a harem, however, there are often other males, but they are subordinate to the single dominant male. Indeed, compared to the dominant male, they look much more like females, being smaller and duller. However, this situation can change rapidly. One of the subordinate males might experience a surge of testosterone and a boost in growth, suddenly becoming big and powerful with his face and buttocks becoming more intensely coloured. If he feels that he now outmatches the dominant male in size and colour, he challenges him. If displays and shouting matches can't settle the issue, they fight. If the challenger is successful, the previous dominant male can get expelled from the harem. He can even be killed. If expelled, he in turn can challenge the male of a different harem. All of this fighting leads to high mortality among the males. In total, only about 7% of mandrill individuals are adult males. 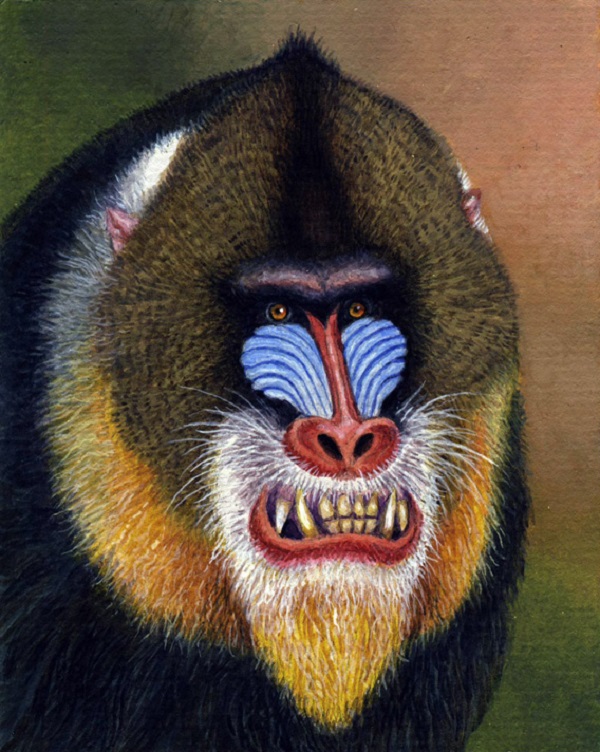 Mandrill displays centre around the 'yawn'. Here the mandrill opens its mouth wide, wagging its head up and down, displaying its long, sharp canine teeth. Obviously in the huge, dominant male, this display is most impressive, and indeed signals his dominance to others. But yawning is a general greeting and appeasement gesture, and also indicates tension. Grimaces are used to challenge others. The ridges on the face accentuate the impact of the grimace.


Like other baboons, mandrills are also quite vocal, uttering barks, screams, grunts and squeals, which carry through the forest. They're more noisy when in large groups, where there's more interaction between individuals; small groups are much more subdued. Group size can vary, the average being about 30 animals, but in some cases as many as 600 individuals gather together; harems remain distinct among these groups, each remaining dominated by its own top male.


Group size is a matter of food availability. Mandrills are omnivorous. Most of the time they eat the fruit of several species of jungle trees and climbers. But outside of the season of abundant fruiting, they will eat somewhat less tasty fare: the leaves and stems of understory herbs and shrubs, roots, tubers and bulbs, fungi, insects and other invertebrates, and the occasional bird or small mammal. They forage largely on the ground but will climb into trees and bushes for something tasty. They travel solely on the ground. When food is abundant, they usually go about in small groups, joining together in greater numbers when and where food is scarce. Each mandrill can cover a distance of 10-15 km a day. They move about a lot, intensively foraging in one region of a while and then moving on to another when its resources are exhausted.

Humans and mandrills can co-exist; mandrills are able to utilize secondary forest and the regrowth that happens after logging and shifting-cultivation has passed along in one specific area. But then the forest must be allowed to recover. Clear-cutting and permanent cultivation entirely destroy mandrill habitat. But the worst danger for mandrills is from hunting. The 'bush-meat' trade in central Africa is basically entirely unrestrained hunting and selling of anything and everything; on bush-meat markets you can buy anything from birds and rats and squirrels to gorillas and chimpanzees. Mandrills and drills are targeted specifically, their meat being considered tasty and more sought-after than beef or mutton. The hunters today are sophisticated: they use firearms, set traps, use dogs to track down their quarry, and spotlights with which to hunt at night. They transport the meat with big trucks and store it in refrigerators; it is a vast enterprise and very lucrative for the hunters and the meat-sellers. It is also exhausting the native wildlife of the rainforests at a frightening pace.


Mandrills also don't have much of a native range; they're only found in moist, prime rainforest in the countries of Gabon, the Congo (not the DRC), Equatorial Guinea and Cameroon. There are only a few protected parks and reserves in this region, and even there the mandrills are not entirely safe, poachers being hard to control. Zoos may prove to be the saving grace of the mandrill, since many live there today and breed fairly easily in captivity, where individuals have reached the age of almost fifty years. In truth, if humans will just give mandrills a chance in nature, these intelligent and versatile baboons could easily recover their numbers and become safe, widespread and abundant.