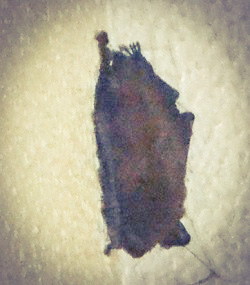 You wake up, yawn, shuffle down the hallway, eyes blinking blearily. Wait…what's that dark brown spot high up on the wall? It wasn't there yesterday. Pinching yourself to make sure you are awake, you look at the large spot again. It's sort of fuzzy, could it be spreading mould? No, it's not mould. Oh, dear, it's a bat. A Little Brown Bat, to be precise: Myotis lucifugus. If you're seeing it, you're in North America. What's it doing on your wall? Sleeping peacefully, apparently.

Which leaves you with a bit of a problem. Before we solve it for you, let's review a few facts about the Little Brown Bat.

How to Get a Bat to Leave

In the unlikely event that the bat wakes up and starts flying around the living room, then you've been too slow. Continue swatting gently in the direction of the bat. This will confuse its echolocation system somewhat. In that case, it's likely to fall down in bewilderment. At this point, do what you should have done in the first place and slip the dustpan under the bat, clap the broom over it, and run outside before the bat gets any more ideas.

This quick and easy advice will take care of the stray bat which has wandered into your domicile by mistake. Unfortunately, many North Americans find themselves in the unenviable position of harbouring colonies of bats in their attics. Besides inviting unwanted quips about belfries, the presence of bats in the attic is a nuisance. Major considerations are noise1, guano, and the aforementioned disease vector problem. A colony of bats should not be evicted with brooms. 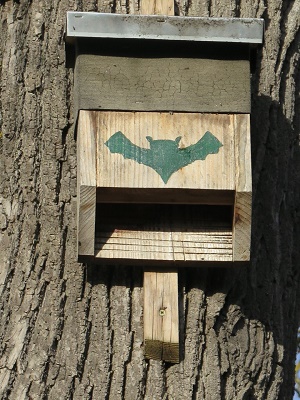 The Humane Society of the United States offers some first-rate advice for reading Little Brown Bats the Riot Act in bulk. They strongly recommend you contact a professional. You should also keep in mind that nesting lady bats with young may not legally be evicted until the kids leave home. Once you are sure that you are officially allowed to stop being a bat landlord, the experts can help you install sneaky one-way doors to get rid of the bats who came to dinner. Bats check out, they don't check in.

Little Brown Bats like to roost in trees, but other bats require different types of shelter. Want to give a bat a good home? The National Wildlife Federation (US) has advice for building bat houses.

A last word on bat rescue: don't let your cat chase the bat. Cats mistake these creatures for flying mice, and may injure or kill them. Found an injured bat? Here's some excellent advice from the UK Bat Conservation Trust. That link also has helpful UK phone numbers. North Americans may find this page from Bat World Sanctuary helpful.

In the meantime, take a moment to appreciate the Little Brown Bat. He's a cute fellow, he's clever, and he keeps away those pesky mosquitoes. And no, he's not trying to nest in your hair.

1The claim that Little Brown Bats have memorised the lyrics to The Rocky Horror Picture Show is without foundation, however.