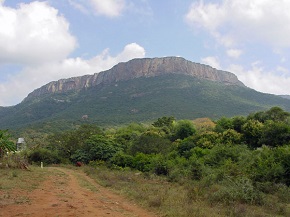 We were on another CREW outing, in search of rare plants! This time we visited the Blouberg ('Blue mountain'). This is an isolated mountain massif (and it is massive indeed) here in the far north of South Africa. It's a rural area; part of the northern slope of the mountain, along with some of the surrounding lands, are conserved in the Blouberg Nature Reserve. We were not in the reserve itself, instead having arranged with the community living on and around the mountain to camp there. We even arranged for porters! I was not feeling very fit so I asked for a porter to carry my backpack and tent up, but I was willing to carry it down myself. Several others also availed themselves of the porters. The community wants to see if it can make a bit of money from tourism, so we'll try to help them.


The mountain and region has immense tourism potential, the scenery being spectacular and the biodiversity incredible. It is an ancient mountain, formed by the same forces that formed the Soutpansberg Range to the east. As it is, the Blouberg is disconnected from that range by just a small gap, but this separation might be enough for evolution to have happened differently in the two regions, leading to some endemic species on the Blouberg. A new species of carrion flower was indeed discovered around there recently, and there might be many more unique species hiding on the mountain. It is a rugged place, difficult to explore, and rather neglected by botanists. Even our own outing was incredibly cursory, making just the tiniest scratch on the surface. And we found a LOT of species. Bronwyn, our leader – botanist at the University of Limpopo – took along a file showing the species CREW wanted us to look out for: plants that are rare or localized, and expected to occur there. They wanted records showing what grows where and roughly how many of them there are.


There are no facilities on the mountain, only rough tracks used by the locals. But there are many mountain streams, so no need to take water. We did need to carry up our clothes, food and other essentials. We would sleep in tents … except that two of the gents accompanying us didn't take tents, taking their chances at sleeping under the stars – and hoping that it wouldn't rain!


We started our hike around eleven on Saturday morning. The photo at the top shows the approach to the mountain from where we parked our cars.


Aside from our porters and guides, we were also accompanied by a group of children who chattered excitedly. They left us about half the way up. The going was somewhat difficult, the track being steep in places, but actually not at all difficult compared to some of the hikes I've been on. But as I said, I was not feeling very fit, being very low in energy and lightheaded. But I was alert enough to the plants! We started by hiking up a ravine, which had occasional streams flowing down it. The scenery was spectacular, with huge rocks in the riverbeds, rapids and pools, the water serenely babbling as it flowed over the rocks. The vegetation varied from quite tall forest to more open woodland. 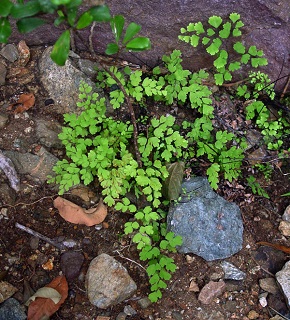 I was especially looking forward to seeing and identifying ferns. I have recently purchased a beautiful and complete guide to the ferns of South Africa – an area where I have very little expertise, so I was looking forward to gaining some. I took some photos but my own camera is not the best, so I asked Bronwyn to take some as well. At the start, there weren't many ferns, but as we climbed higher, getting closer to the mist belt, they increased in number and high up there was indeed a great diversity of beautiful species! Here you see a maidenhair fern (Adiantum).


The riverine forest had many big and beautiful trees, such as Cape Chestnut, Forest Bushwillow, False Cabbage Tree, Forest Elder and Forest Silver-Oak. When we reached the moister mist-belt forest, we were treated to magnificent Outeniqua Yellowwoods. But one of the most special sights to me was this Lavender Tree (Heteropyxis natalensis), which is ordinarily quite a small tree – but this one was big and gnarly. The leaves of this species are wonderfully scented.


The forest also yielded interesting species in the undergrowth. We were looking for Dioscorea species (wild yams) and also for Adenias (relatives of passion flowers). We got both! There were also rampant vines – mainly Rhoicissus tomentosa, a wild grape – and thorny vines, Dalbergia armata. Understory trees and shrubs included Knobwood (Zanthoxylum) and Bird-Berry (Psychotria).


The hike up to the plateau where we would pitch our tents took a couple of hours. When we reached the top of the ravine, we were treated to a wonderland! The environment was moist and marshy, with myriads of pools of clear, cool, inviting water, around which grasses, sedges and some of the most beautiful, soft moss I've ever seen, grow. Here you see a small clump.


The forest opened up into grassland dotted with clumps of trees, amidst which were many beautiful flowering plants and succulents. In addition, there were the most amazing rock formations. It is clear that the region has been experiencing water erosion for incredibly long ages, leaving behind the most incredible twisted and contorted rocks. They formed natural statues, leaning pillars, rocks stacked as if by giants, and shapes suggestive of living things. The photo can't really convey the full impression.


And amidst them all there were the plants! The more rugged a mountain is, the more unspoilt the vegetation. And the Blouberg is pretty rugged, so it's like God's garden up there. I can't remember when last I was in a place in which there were so many things I didn't know. I wish I could have taken more photos! Here you see a kind of daisy, also growing in cracks in the rock faces. It is wonderfully camouflaged amidst the grey of the rock and the blue-grey lichens also growing on it. Sadly I caught it only after its flowers already started to wilt, but I hope you agree its leaves are lovely.


Once the forest had opened up and we were in the grassland, we suddenly were able to enjoy spectacular vistas. We were not near the top, instead being at an altitude of about 1600 m/5200 ft. The rest of the mountain still towered above us – the highest peaks reach a height of about 2050 m/6 660 ft. We could see the ancient rocks going further up, tier by tier.