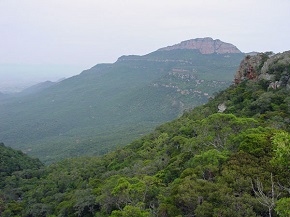 Unfortunately, on this trip, we would not go to the top – there was simply not enough time. So we hiked along the plateau to the place where we would camp. Not far from there, the stream cascades over the plateau edge opposite to where we climbed up, over a waterfall of a couple of hundred meters, beyond which there’s a wonderful vista of the mountain slopes and the lowlands to the south and west – as well as more of the mountain looming above us. Here you see a view, also taking in the canopy of the mist-belt forest.


On maps, the Blouberg looks like a single mountain, but seen 'in the rock' it is immense – more like a compact, self-contained range. Although in extent it is far smaller than the allied Soutpansberg range, it is about 300 m/1000' higher. Here you see a view of the summit, at least the highest part we could see from where we were.


We got to our campsite close to sundown, but I did a bit of exploring before settling down. I pitched my tent a distance away from the stream where most of the others camped, on a little sub-plateau; I was joined there by the two tentless gents and another lady. The land was flat enough and grassy – not too hard or uneven – but the soil was very shallow, over hard rock, and I could not drive the tent pegs in very deep. I turned in early, hoping to get up early the next day for some proper exploring. 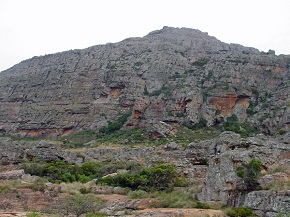 During the evening and night there were strong winds and I could hear and feel bits of my tent flapping around. About the middle of the night I suddenly felt cold – not knowing why! I snuggled deeper into my sleeping bag and managed to fall asleep again. The next morning I realized why. The covering sheet of my tent had blown off entirely, leaving just the flimsy inner sheet to protect me! I wonder how the two gents who slept out in the open felt … that wind was pretty cold! But at least it hadn't rained. The day started cold and misty and I didn't get the early start I'd hoped for. I waited in my tent for the day to heat up a bit first! I did get some prospecting done, but not as much as I'd hoped. At least we found a few more species we were looking for, and I took some more photos. Around ten our guides and porters returned, to carry the bags for those folks who wanted them carried down as well. As I'd planned, I took my own bag down. I was still feeling weak and lightheaded, afraid of falling, but I managed quite all right!


Here are some more photos.


Here’s a weird type of fungus! It grew on the floor of the ravine forest.


Another sage, this time with deep blue flowers! This one grew about 1.5 m/5' tall, and is one of the loveliest sages I've seen in the wild so far.


Aloe vogtsii is a species of aloe occurring on the Blouberg and Soutpansberg, with broad inflorescences of pink-red flowers.


This is a rock pool typical of the kinds we found up on the plateau. The gnarly tree overhanging the water is a Waterberry/Umdoni, Syzygium cordatum.


Here is a fern I could identify! It's a Pellaea pectiniformis, the comb-like Pellaea. It grows in rock cracks and at the bases of boulders. 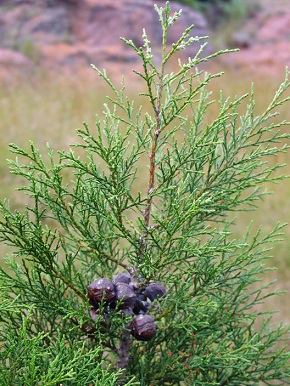 Lastly, here is a Mountain Cypress, Widdringtonia nodiflora. This is one of only three species of typical conifers indigenous to South Africa. The yellowwoods are also coniferous, but have broad, flat leaves unlike the needle- or scale-like leaves of most northern conifers. A large number of conifers from Europe, Asia and the Americas have been imported into South Africa by gardeners and foresters, and some are actually invading our native forests and grasslands, displacing the indigenous species. This Widdringtonia occurs widely in mountain regions, and is usually shrubby. The trees and shrubs are very vulnerable to fires – but while above-ground portions burn down completely, they can re-sprout from the undamaged trunk base and roots. An impressively large specimen overhung our campsite.


Though our focus was on the plants, we also logged over thirty species of birds. We didn't see mammals though … perhaps there's too much disturbance from the local community. Cattle apparently graze quite high up into the mountains, and we saw people with dogs, perhaps hunting. We got some frogs and reptiles, which Vincent, Bronwyn's husband, specializes in.


All in all a great trip, and we absolutely will have to return sometime soon! Fellow South Africans – by all means go and visit the Blouberg, a scenically glorious, biodiverse and little-appreciated region of our country.