A hundred or so years ago, people were really optimistic. Okay, some people were really optimistic. Their optimism showed up in hopeful city planning ideas: they were really going to build all those 'alabaster cities'. This article about Chicago begins with the reporter attempting to figure out what street he's on. He needs a phrasebook, preferably with the words 'hovercraft' and 'eels' in. Then he tries to fathom why the Loop represents Progress. . .

You can read more about Chicago in this collection of essays printed in 1909.

We would appreciate it if a h2g2er would take a snapshot of Michigan Avenue to use as a 'then and now' contrast. At least, if it's safe to do so, and not too many people yell at you. 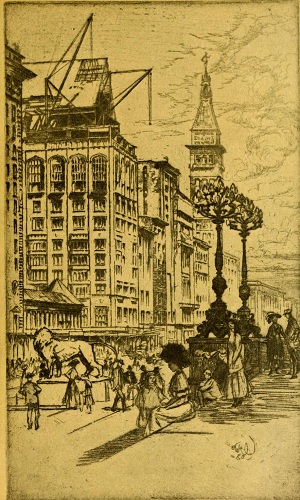 In all probability the impecunious1 stranger will settle down to receive his first impression of Chicago from a street-car, because this saves money
and a great deal of time in a new community. Framed for an instant by the window-sash, a myriad of things barely seen flit by in a disordered pageant of struggling people, streets bristling with chop-suey signs2, great office-buildings, trolley wires, street-cars, trucks, automobiles, and Irish policemen3. I open my map to see where I am heading.

"The loop," the conductor says.

"You don't mean to say so?" I look rapidly out of the window to locate the thing, fearful that I may be too late to see how the populace amuses itself.

The passengers, hanging like bananas4 from the straps above, pivot grotesquely about as we turn a corner. The man is still looking me over suspiciously.

"The loop," he repeats, with a dogged persistence.

In my anxiety to open the car window it jams. A passing car obstructs my view.

"You're on it," he replies, dryly, withering me with a glance. "It will be five cents."

I pay my fare, and reach the cold, unsympathetic pavement, and board a car going in the opposite direction. Now we are passing through a city canyon echoing with the roar of traffic. A horde of people rushes past in the gloomy shadow cast by great walls of granite, groaning under tons of bastard ornament.5 This must be one of the principal thoroughfares, and I ask my neighbor here we are.

"Non capisco, Signore," is his polite reply. I bow my thanks and turn to my left.

"Could you tell me what street this is?"

He smiles and makes some primitive signs with his hands and arms. I reply by motions more involved, occasionally moving my scalp. We are making little headway, when I spy a likely fellow sitting beside my new acquaintance. With suppressed agitation I put my question to him.

"Pardon, vat for you demande?"

He is anxious to help me. I repeat slowly, "the name of the street we are on."

Then I remember that Chicago is cosmopolitan6. There still remains the man swinging on his strap before me. He is an American – unmistakably American – and I begin again:

"Perhaps you could tell me what street this is?"

He leans far over, holding his hand around his ear in the shape of a megaphone. I repeat my question with great emphasis, and his face brightens.

"Well," he replied, after great deliberation, "if the three-fingered Wizard is in the box, they'll make it three straight or I'm a . . .7"

The end of this sentence was drowned by the explosions of a passing automobile.

"No; you've missed it," I screamed, now fully decided to make him understand. "What street are we on?"

"You think so, eh? Well, I'd like you to tell me how a man is goin' to pitch three games and be strong, and ain't all the others cripples8?"

There is still my map, which I have overlooked in the excitement. I open it with a nasty grimace.

And there we are again, a struggling car-load of humanity, scattering ourselves over the street. A loop victim may be easily recognized by his childish petulance and overbearing manner toward his wife or friends every time he hits the pavement where the car has dropped him. To find the loop, look for a panic-stricken group of strangers groping about in a futile effort to find the street name; for in Chicago the latter may turn up – if it does at all – in the most unexpected places: half obliterated on one of the steel posts supporting the trolley wires, or, high up somewhere, carved in weak relief on the brownstone building; again, it may be hidden beneath the cornice of a building, or the nearest basement may reveal something. If not here, the policeman will have it in his inside pocket. To find him, look for the nearest "Family Entrance."

The Chicagoan is very proud of the loop, and will glow with a sunny radiance the moment you approach the subject. "It is the greatest system on earth." he explained to me. "You see, each car, as it comes into the city from the suburbs, goes immediately into the loop when it reaches the business section of the city, and returns along parallel lines to the point it started from. Do I make myself clear?"

"Perfectly," I replied, with ill-concealed bitterness. "Suppose that you don't want to return to your starting-point, from either domestic or business reasons."

"Yes, but the loop may not be within a mile of my destination."

His manner became somewhat intolerant, and he added: "The loop is near enough for any man's place of business. You can always walk."

Ed Note:Ah, this is the Chicago I remember from my 1960s childhood: huge, cold, windy, hostile in the extreme. It also explains why every single film or television show set in Chicago features footage of the Loop.

1=broke.2Chinese takeaways were popular back then, too.3Almost all US policemen were Irish American until sometime after World War II. That is, if you believe the media.4Bananas were really popular back then. Everybody knew how to hang them to prevent spotting.5We don't think he's cussing. He's commenting on the eclecticism of decoration back then.6Meaning, full of foreigners and, no doubt, of great interest to Homeland Security.7Obviously he was either going to say, 'a Chinaman,' or 'A monkey's uncle,' because this is the unenlightened Past.8Baseball. It blinds one to lesser pursuits.