Pt. 3. The Third Bit: Do we actually have a big red button?

"Something big on the radar and sonar, sir, probably those sneaky Ruskies?"

"Now, now, Number One. Let's not be stereotypical. Here, let me see." Grace went three shades greyer as he computed the size of the object on the screen.

"Jap trawler? Yankee carrier?" He asked, sipping carefully as confrontation and tea were prone to give him hiccups, "Way too big to be one of ours don't you think?"

"I think we seriously need to alert Command. sir, this thing is big enough to cause all kinds of mischief!"

"Mischief, you say? Not good Number One, not good at all. Let's go take a peek at our mysterious friend, hard aport, Battle Stations!"

The red lights went into a frenzy as the destroyer changed course to intercept.

Ten minutes later, and the Admiral was hiccupping requests for immediate air strikes down the line to Command.

"This may be worst case scenario. Get the Prime Minister on the line, and may God forbid he has to use the Big Red Button!"

"Erm, Admiral, we have no such Button, red or otherwise, at least not since the mid-eighties. We could ask the Americans or the Brits to use theirs, if it comes to it? Just what threat are you facing, Grace, calm yourself and be clear, man?"

Their conversation was cut short as 380 square kilometres of Viking-controlled island ploughed through the Well Mannered.

Finally – something to sing about!

Bjorn and Luki woke with terrible hangovers, one of those mind crippling hangovers where the very ground seems to move and the world roars in your ears.

"The ground' smoving!" shouted Bjorn, trying to be heard over the world roaring in his ears.

"What?" screamed back his friend, valiantly holding onto a tree as the headland groaned and shook around them.

A final lurch and the world quietened, the ground now swaying gently, reminiscent of being aboard a large ship. Hangovers forgotten, both men ran to the cliff's edge.

The Island was indeed moving and at quite a pace. In the distance, they could see Britons headland sailing backwards, they were headed west into the unknown. Towards the End of the World.

"No. No. No, no, and a thousand times no!" boomed Odin, thunder clouds masking the top half of his immerse frame, lightning shot from his eyes as he towered over his son, "What in Helheim's name have you been messing with, boy?"

"'Things' are not, shall we say, going swimmingly, son!" Odin waved a huge hand over the portal, the modern world was in pretty bad shape it seemed.

"Now, I'm all for sea monsters, dragons and even those effete Titans threatening the mortals. Out of such adversity comes true heroes. Songs that will echo through the Ages!" again his hand focused on the present, "But this?"

Thor peered at a scene truly incomprehensible. Canada, the land of the free and mild-mannered folk, totally obliterated in a nuclear holocaust. A holocaust started when the Canadians apparently requested President Trump to launch several nuclear warheads into the Hudson Bay. The Russians obviously retaliated and so on, total global warfare in under forty minutes. Oops!

"Oops, indeed. The whole point of worship is actually having mortals around to do the bloody worshipping! Ragnarok I am ready for, being wiped out due to you obliterating every mortal on the earth I am not. FIX IT, BOY!"

In a blinding flash of light, Odin was gone leaving Thor mumbling about how parents never understood anything.

He sulkily stirred the ashes of time, moving the Isle of Wight out of the way of the Lucky Lady and Admiral bloody Grace. 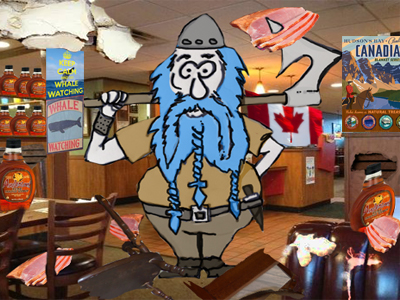 Vern was strangely pleased when Cindy had agreed to cut whale watching from their itinerary. Something about going out to sea had rattled them both like a door screen in a tornado. Cold sweat ran down his spine in a rather unexplained torrent at the mention of Hudson Bay.

So here they were, enjoying an unhurried breakfast, chatting about their futures and very obviously avoiding any mention whatsoever of whales.

"Now, that was good chow!" Vern patted his stomach, threatening to pop the already straining buttons, nonetheless he picked up his empty plate and headed towards the bacon, "Maybe just a little more room ,honey" again he patted his paunch, hitched up his shorts and gave her a peck on the cheek.

Vern' s well-being was well and truly shattered as the wood and glass facade blew inwards in a hail of blue hair, leather pants and very large beards. Axes and swords hacked into the restaurant, breakfast treats flew as the patrons ducked for cover.

The two invaders hurled what presumably were threats at the staff who were politely trying to find a free table for the duo. The waiters shrugged, (must be Frenchies) and futilely began to clear up the debris.

"Good morning, sirs, welcome to Den.." The maître' d went down with a well-swung axe, the rest of the front of house crew promptly formed a well-ordered line and headed for the only place that was usually avoided in the morning rush, the salad bar.

Luki's eyes settled on the intricate array of bottles, shelf upon shelf of amber liquid! The Gods were smiling on them today. Wood splintered as the cabinet was forced open, the first bottle was emptied down his gullet in one huge chug. The anticipated burn of alcohol was replaced instead with a warm and sweet trickle down his throat. Another and another yielded the same feeling. What kind of ale was this?

Instead of the usual fuzziness, Luki felt suddenly keen of mind and full of energy. Taking another bottle of the sweet liquid, he began charging around the restaurant screaming at the cowering patrons and having a good old ransack.

Bjorn the Blue Bear meanwhile had been attracted by the sweet smell of cooking meat. After weeks on a dried fish, raw fish and fish stew diet he hungrily devoured the fatty pig meat on offer.

Gradually, with the invaders distracted, the restaurant emptied of diners. Two remained. Their gazes caught between watching the two berserk Frenchies and the cowering staff who were politely staying out of the way whilst compiling the bill, adding new items by the minute as the Vikings sated themselves.

Vern decided enough was enough, they were Americans darn it and they would not have their honeymoon ruined by some weirdo costumed Frenchies. No siree Bob. If this was classed as entertainment by the Canadians, give him Vegas any day!

He stood, dragging Cindy to her heeled feet and threw a few notes onto the table before heading towards the remnants of the doors, stopped and headed back, pointedly taking a ten from the pile, showing it to the still cowering staff and miming "No tip!"

Point proved, he turned. Only to walk into a wild-eyed, fishy-smelling and very sugar-fueled Luki.

Luki growled down at the small round man dressed in ridiculous garb.

Vern had that strange feeling of having been here before, knew there was probably a term for that but couldn't recall, some foreign jibber jabber, probably Fre.......then everything went black.

A short while later, the two sat in the ruins of the restaurant, groaning with the pain of overstuffed bellies, and coming down hard from a massive sugar rush. Bjorn looked dazedly around at the wreckage "Where to now, my brother?"

Luki grinned through his maple syrup matted beards, "I never know where I'm going Bjorn, I just enjoy the journey!"

"Then they shall sing of Leatherpants the Lost" spat Bottlesson around a final large mouthful of bacon.

The staff in the totally destroyed Denny's continued to cower behind the salad bar as the red and blue lights pulsed outside.