Steampunk, it's what we're all about. Nowadays, it's digital gizmos. But back a hundred years ago, enthusiasts spread the word about an up-and-coming trend called the automobile. 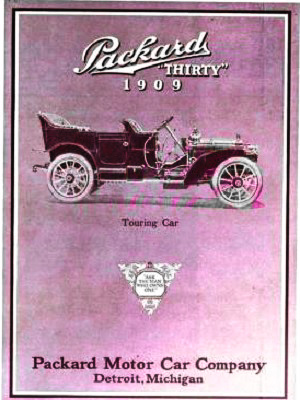 Ed. Note: This exciting information comes to us courtesy of the 1909 issue of Horseless Age. Isn't that a wonderful name for a periodical? Peruse at your leisure, motor fans.

H. D. Wilson, who is in charge of the Packard office in Paris, reports to his company that from the middle of March to the present time no less than twenty-five parties touring Europe in Packard cars have called at his office, and several others have been visited by him at their hotels. In addition to these, a number are still in the south of France and Italy, and he believes that at
least fifty Packard cars will be taken to Europe by their owners this year.

The automobile is mixing into Kansas politics. Senator Chester I. Long of that State, who wishes to go back to Washington, and Cyrus Leland, who would have the Republican nomination for Governor, are making tours of the State mainly by motor car. The cars save time waiting for accommodation trains, which run with painful infrequency in the rural districts, and have made it possible for the campaign orators to cover the State in half the time used under the old system.

In Iowa 1436 cars were registered during tbe first six months of the year, 408 of these during May. The total number of registrations in the State up to January, 1908, was 4,700, which may permit some conclusions as to the actual state of the automobile business in the Hawkeye State.

Lewis R Kirby, district attorney of San Diego County; Howard Cherry, auditor of the county; Mrs, Cherry and her daughters, were crossing San Diego Bay on the evening of June 26 in the ferryboat going to Coronado. All but Kirby were seated in an automobile, which Kirby began to crank. The car started and knocked Kirby overboard. Mrs. Cherry jumped to the deck of the boat, but the others went into the bay. All were rescued little the worse, except Cherry, who was taken to a sanitarium.

C.C. Williams, a Louisburg, Kansas, farmer, three years ago bought a Ford runabout and recently purchased a second machine of the same make. The Ford Company has sent us some photos showing Mr. Williams using tbe motor of the old car for sawing wood, and the new car for hauling a road scraper. The Ford Company states that it has secured some of its most aggressive agents among the farmers to whom it has sold cars, and who were then given exclusive rights to sell cars in their town or village.