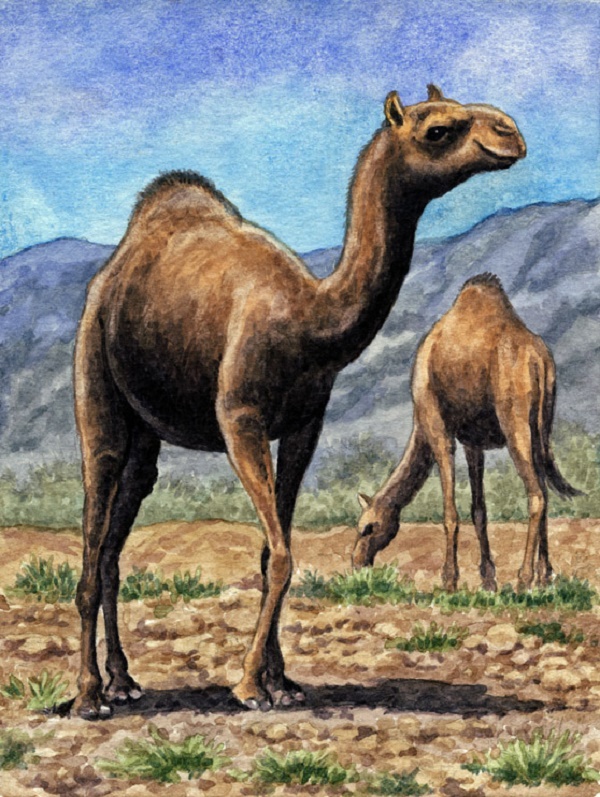 Here you have a couple of dromedaries! The original is a small watercolour painting. Dromedaries are also called Arabian or One-humped Camels. Scientifically they're called Camelus dromedarius; their old Greek name was 'dromas kamelos' or 'running camel'. Some people think only the actual race of running camels should be called dromedaries, but the name is widely applied to the one-humped or Arabian camel in its entirety. Dromedaries are more slender than Bactrian Camels, with longer legs. They reach 2 m/6/7" at the shoulder, the hump standing a bit taller still, and a bodyweight of 600 kg/1320 lbs. Females are only slightly smaller than males. Most dromedaries are brownish, but their coat colour can vary from almost white to black, and some are even patterned.

Camels, like horses, are originally North American. The earliest forms evolved around 50 million years ago and were small, forest-living critters that were probably good at running and jumping. They soon diversified into larger kinds, including sheep-like, gazelle-like and even giraffe-like forms. One tribe went into South America, where they became the llamas, guanacos, alpacas and vicugnas. This tribe, and the more conventional camels, diverged from each other around 25 million years ago. Camels proper lived in North America for a long time, the last species going extinct only very recently, after the first humans arrived. There were several species of giant camel, some close to the size of an elephant! We don't know today if these North American camels had humps … perhaps not, since the regions they lived were not really desert-like, but more like lush savannah.


Somewhere along the line – probably fairly recently, geologically speaking – camels made it over into Asia from North America, using the Bering land bridge which formed to connect the two continents at times when the glaciers were at maximal extent, causing sea levels to be much lower. It is possible that camels only then became the desert-living paragons we know them as today, evolving humps as stores of food (not water). The Bactrian camel might be close to the original form of the first Asian camels; they subsequently diverged, with the dromedary probably being the more recent form.


Neither Wild nor Tame

No originally wild dromedaries are known – all populations we are aware of, are domesticated animals or their descendants. They were first domesticated around four thousand years ago in the Middle East, from where they were introduced as beasts of burden into Africa and other regions. Truly wild dromedaries probably have not existed in the past two thousand years. Yet, even camels used by humans are not exactly tame. They're ornery beasts, not very obedient. Camel riders and herders somehow manage to get them to cooperate. When not in use, they form herds and go about their business. Each herd usually has a dominant male, and several females. Other males can form bachelor herds. Dominant males will try to scare bachelors away from the females, snapping at them, stamping their feet or interposing themselves between their females and the interlopers.


In the mating season, males become more aggressive. They will be even more difficult to manage, will spray urine over their bellies and backs, and inflate their soft palates, called dullas. These hang out of their mouths like bloated tongues; they also salivate copiously and make 'burbling' sounds, blowing the spittle into froth. Males will then sometimes fight, wrestling or biting each other. But mostly they try to settle things through dominance displays, standing tall and arching their necks backwards.


Dromedaries mate with the female kneeling on the ground and the male mounting her. Camel herders typically … um, assist the males in getting it done, but camels can indeed mate unassisted as is proven by herds of feral dromedaries multiplying naturally. The gestation varies from about a year to fifteen months, and typically just a single calf is born.


Today, dromedaries are found in large numbers in north- and northeast Africa, in Arabia and the Middle East, and in western-central and southwestern Asia, where they marginally overlap with Bactrian camels. The two species can indeed interbreed. Dromedaries have also been introduced into Europe, North and South America, Southern Africa, and Australia. The largest feral population, about half a million, is in Australia, where they even cause ecological problems, destroying too much of the sensitive desert vegetation. Dromedaries thrive in dry climates … they don't like cold or wetness.

These camels have a plethora of amazing adaptations that enable them to cope with their desert environment. The hump can store up to 36 kg/80 lbs of fat. Fat is the most concentrated source of nutritional energy, having more than twice as many calories per gram as protein or carbohydrate. Aside from the fat, the hump also contains fibrous tissue to hold it together. The reason why fat is concentrated in the hump rather than being spread uniformly under the skin of the whole body, is that, if that was the case, it would insulate the camel and cause it to retain too much heat. Now instead, it can shed excess heat from the skin over the rest of its body, especially from its long neck and legs.


Dromedaries do indeed allow themselves to cool down more than other mammals their size. During the cool or even cold desert nights, dromedaries allow their body heat to decrease to just above 30 degrees Celsius. Then as the day breaks the dromedaries start out unusually cool, letting themselves heat up only slowly so that they reach their maximum body temperature, 41.7 degrees, only late in the day. From there they can shed excess heat by sweating just minimally. A dromedary also has a special network of blood vessels in its skull to keep its brain cool. Dromedaries will rest up, using any available shade they can find, during the hottest part of the day, being active in the cooler mornings and afternoons. They rest at night also.


Apart from heat, dromedaries also need to cope with dehydration. They can go without water for 10-15 days – which is normal for them; in some circumstances they can go for even longer, being able to get some water from browsing on desert plants. As it is, dromedaries can dehydrate to the extent of losing 30% of their body weight, in water! Humans are in big trouble if they dehydrate by more than 10% or so. The biggest challenge with this dehydration, is keeping the blood still flowing … if too much water is lost from the blood, it becomes thick and viscous and can overburden the heart which tries to pump it. Somehow, camels are able to restrict losing water content in their blood, keeping the loss to the body tissues. Perhaps this is helped by their red blood cells being ovals rather than round discs … but we don't quite know how that works. A dehydrated dromedary looks shrunken, with its ribs showing. But give it some water and it will re-hydrate at an amazing rate. Over ten minutes or so a dromedary can drink more than 115 litres of water! This very rapidly passes out of the stomach into the tissues, so that the drinking camel plumps up visibly in front of your eyes! Dromedaries can also drink brackish or salty water without ill effect. They have very efficient kidneys, producing very concentrated urine through which minimal water is lost.


There are other dangerous desert conditions such as dust storms. Dromedaries have large and keen eyes, protected by overhanging eyebrows and double-layered eyelashes to shield the eyes from the sun and to keep the dust out. They can close their nostrils voluntarily, which not only helps keep out dust, but also restricts water loss. The coarse hair that coats the body, longest on the neck and hump, also helps protect the dromedary against both heat and cold. In extreme heat they can even huddle together to prevent themselves from overheating, as other animals huddle together to stay warm in cold weather.


Though a camel has broad, pad-like feet with two blunt nails at the tips of its toes, it is actually a member of the even-toed hoofed mammal order, the Artiodactyla. Like most other artiodactyls, it ruminates, re-chewing its food to ensure better digestion. Its large stomach also helps it to break down coarse desert vegetation and extract maximum nutrition from it.

Today, dromedaries are vital means of survival for humans in the world's driest deserts. People ride dromedaries, use them to carry heavy loads over long distances, and even to plough their fields. They're also used for their milk, meat, and wool. This intensive use of these camels is actually a fairly recent thing, having become prevalent mostly under Islamic society; the ancients used camels more sparingly, but they did use them to carry burdens and even during warfare! Dromedaries today are also tokens of wealth, in northern African societies, as cattle are in the lusher, more tropical parts of the continent. The strict dromedary or running camel is today still used in camel races! They're not quite as fast as horses are, but camel racing remains quite popular in North Africa and Arabia.


Being a domesticated mammal, the dromedary is not in danger of extinction, the world population probably numbering several millions. It would be interesting as an ecological experiment to see if it could become a wild animal again, introduced into a large desert nature reserve somewhere in Africa or Asia and left to do its own thing. Feral dromedaries in Australia suggest that it could become very successful … and we ought to find a better and more suitable place for them to live than Australia.