Colours of Wildlife: The Bactrian Camel 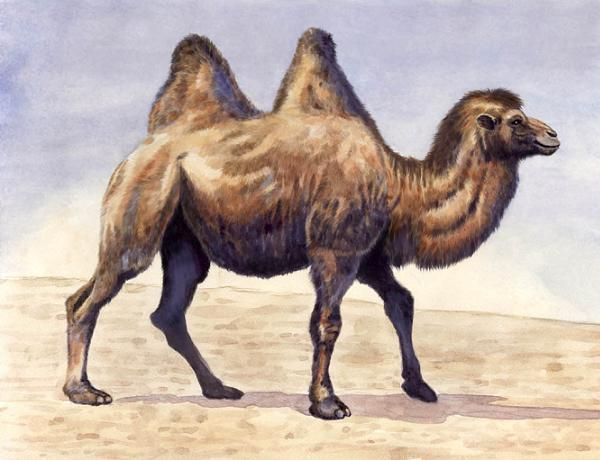 Today's painting is of a Bactrian, or Two-Humped, Camel, Camelus bactrianus. The common camel of Arabia and the Sahara Desert is the Single-humped Camel, or Dromedary, Camelus dromedaries. The Bactrian camel is the one used over much of the cold, dry desert regions of central Asia, up to eastern China, with about 1.4 million living in domestication. However, in the wild, this species now numbers less than a 1000 individuals, in the Gobi Desert of Mongolia, and the Taklamakan Desert of northwest China, and a few wild ones in Kazakhstan and India.

The main difference between the Bactrian Camel and the Dromedary is the humps: the Bactrian has two, like a pair of mountain peaks with a ‘valley' in between them, while the Dromedary has just one. Most people know by now that the humps are not a store of water as some people believed in the past. They are full of fatty tissue, fat being the tissue in which energy can be stored in the most concentrated form. The hump becomes bigger the better the camel is nourished. In the Bactrian camel one or both of the humps sometimes slump over to the one side. This can happen when they are fat-depleted and become limp, but can also happen in adequately fattened individuals. But this is of no detriment to them. It is true that water is released when this fat tissue is broken down, but more water is released and exhaled by respiration during this process than is produced by the breakdown. So the humps are more to allow the camel to go for very long periods without food. Camels conserve water through other adaptations, such as their blood – which flows more easily even when very concentrated – and their urine, which is very concentrated, and dung that comes out dry enough to instantly make fire with, due to the efficiency with which their kidneys and digestive systems extract water from their food and wastes.

Then, when camels do have access to food and water, they can ingest huge amounts of both. A camel can ingest an incredible 100 to 150 litres of water during a single drink! The oval design of their red blood cells also ensure that they don't rupture as a result of all this water now suddenly coming into the blood. This water is lost very, very slowly, because a camel sweats very little, and its nostrils are adapted so very little water evaporates as it breathes as well. Also, camels can endure great variations in their body temperature. At night it can go down to 34 degrees Celsius (93 degrees Fahrenheit) while in the day it can rise to 41 degrees Celsius (106 degrees Fahrenheit) before the camel will even start to sweat. On cooler days a camel may not sweat at all. Desert nights can be very cold, and the camel's shaggy fur is good isolation, making it not too cold in the night but then also keeping it from not getting too hot during the day. But when it is hot enough, a camel can sweat until it has lost 20% to 25% of its bodyweight before it will start having dehydration problems. That's like a 200-lb man going down to 150 lbs just from sweating! A camel will lose body fluids up till this point while its blood remains fully hydrated.

A camel also can consume a meal consisting of sixty pounds of food at a sitting. In the wild, they eat almost any kind of vegetable matter, having hard, bristly lips and tough gums and teeth to deal with the many twiggy and thorny shrubs and trees that grow in desert regions. When the climate is not too harsh, camels can survive for long periods just by eating, without drinking, by extracting all the water they need from the tissues of these plants. Camels are cud-chewers, with three stomach sections rather than the four that cows and other advanced ruminants have. They first eat the food, chewing it very little but swallowing it so it passes to one of the sections, where it is digested a bit, then passed back to the mouth where it can be chewed some more before being swallowed again and passed to the rest of the stomach for the final digestion. This system is effective at removing a large amount of nutriments from the generally nutritionally poor plants that camels usually eat. But when camels are hard-pressed for food they will chew on bones or even scavenge carrion. Sometimes they will even nibble at their owners' tents!

Related to this is the ‘spitting' camels sometimes do when they're upset. They are actually projectile-spray-vomiting some of this half-chewed cud onto whoever it is that is upsetting them. This happens rarely but when it does it's quite disgusting!

The Bactrian Camel is larger and heavier than the Dromedary. It can stand 2.4 m, 8 ft, tall at the humps, and weigh up to 1500 lbs/700 kg. Domesticated individuals can reach 2200 lbs/1000 kg. It also has a much longer coat, becoming especially shaggy in winter. We watched a movie on TV this Christmas – my sister and her family and me – and there was a live camel used during a pageant scene of Jesus's birth. Of course this was in America and it was snowing and my sister worried if the camel wouldn't be feeling very cold. She was thinking of the African Dromedary camels used in the Sahara. But the camel in question was a Bactrian camel, and these live in the cold deserts of central Asia. In the Gobi Desert it can get incredibly cold in Winter – minus 40º Fahrenheit (which happens to be minus 40º Celsius as well), which is comparable to Siberia. The Bactrian camel's shaggy coat can therefore protect it against some of the most extremely cold temperatures on the planet. I am certain that camel in America was feeling perfectly toasty!

Bactrian camels were domesticated later than Dromedaries … about 2500 years B.C. compared to perhaps over 4000 B.C. for Dromedaries. This probably happened around the region that today is Iran, Afghanistan or Turkestan, They have since then been very useful pack animals in central Asia. Despite its size and lumbering appearance a Bactrian camel can outpace a horse over long distances. All camels use the pacing gait, with both legs on one side of the body moving forward and backward together. This is because of their long legs, to prevent the front and rear feet on one side of the body from knocking together. They can gallop, though, if there's need for more speed. Camels can achieve speeds of 65 km/h, 40 mph, which is almost as fast as a racehorse. They are aided by their long legs, which also help keep their bodies far above the intensely hot desert sands. Their feet are large and padded, to keep them from sinking into sand. They have hoofs at the tips of their toes and properly belong to the Ungulates or (advanced) Hoofed Mammals.

A very weird – perhaps even disgusting – feature of camels that many people don't know about, is that they have a cavity inside their mouths the lining of which can be inflated to become a balloon-like bladder protruding from their mouths, called a dhula. This is used when males display to females, and can sometimes interfere with breathing, so that often in domesticated camels it is surgically removed, with no apparent detriment to the animals. This is found in Dromedaries, and has as yet not been found in Bactrian Camels. It is strange why the two species should differ in this way.

Now for my usual foray into evolutionary history. Camels have actually evolved in the New World, first appearing about 50 million years ago. They were all quite small then, similar to most other hoofed mammals of the time, and forest-dwellers. Protylopus might be considered close to the actual camel-ancestor, at about 32” or 80 cm in length, and a weight of slightly over 5.5 lbs/2.5 kg. which is about the size of a rabbit. Camels gradually became larger and adapted to more open environments. In North America at a time there were several different types. Poebrotherium was about the size of a sheep and occurred in large herds around 35 million years ago; Stenomylus was slender and probably fast like a gazelle. Aepycamelus and Oxydactylus were long-legged long-necked types, almost like giraffes; Camelops was somewhat larger than the modern dromedary, having lived in a much milder habitat; Titanotylopus and Megacamelus were huge, almost the size of elephants, the latter perhaps reaching four tons in weight. These American types probably did not have humps since they lived in fairly lushly vegetated savannah and park-like regions rather than in deserts.

Camels spread to South America when the isthmus of Panama formed around 3 million years ago to connect the two continents, and there evolved into what today are called the Llama, the Guanaco, the Alpaca and the Vicuña. These are indeed camels, the only ones left in the New World, and closely related enough that camel-llama hybrids (called camas) have been produced.

The camels that are found in Asia and Africa are descendants of camels coming from North America over the Bering Land Bridge, about 2 to 3 million years ago. It is probable that they developed their adaptations to desert regions only subsequently to this. True camels in North America only became extinct fairly recently, with Camelops hanging around until about 10,000 years ago, at which point its extinction might have been helped along by the humans who had also immigrated to America around that time.

Wild Bactrian Camels today are in serious need of protection. Wild Dromedaries are not known to exist, though there is a substantial feral population in Australia, that are descendants of domestic animals that had been brought there.