Food can bring back seasonal memories. 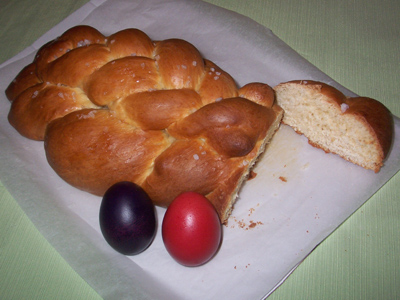 All Hallows day has just passed. We've been at the cemetery and lit our candles at the graves of our families. And of course there was also the traditional Allerheiligenstriezel, which in my case my mother made for us. We ate it with lots of jam and butter.

Striezel is not only a traditional dish at All Hallows but also at Easter. It reminds me of Easter celebrations in my childhood, when we often visited some relatives who own a farm. They mainly had milk cows but also a few chickens and pigs for their own use. From the meat of the pigs my aunt would make delicious roasts, but they also smoked their own sausages and bacon in a small smoking shed in the garden.

Easter celebrations would start on Holy Saturday. A wicker basket was filled with meat, eggs and Striezel and taken to church. I often accompanied my aunt and cousin to the small chapel down the hill, where a priest would come for this special occasion once a year to bless people's Easter food.

In the evening the whole family would then come together in my aunt's kitchen. Her iron kitchen stove was heated up and all chairs of the house stood around two mismatched tables – we were usually eight people. In the center of the tables was a large plate full of layers of sliced cold meat, some of which we had taken to the chapel earlier. It really was a huge heap. There was cold roast pork, smoked sausages, blood sausages, smoked tongue and ham. Between the meat were layers of grated horseraredish and cheese and next to the plate stood glasses of pickled gherkins and onions. Of course there were also plenty of boiled eggs.

All this was eaten with lots of Striezel, and I think the soft, sweet bread always tastes wonderful with salty meat and cheese and sour pickled vegetables. If you had enough of Striezel there was also always a large round loaf of dark bread from the bakery at the next village. My aunt used to cut it with an old knife which she used to keep in the drawer of the kitchen table. She held the large loaf in her hand and cut towards her chest. As a child I was always quite impressed.

After everyone was stuffed and I had been sent to the cellar a few times with a jug to get more homemade cider from one of my uncle's wooden barrels, we went outside where we had already prepared a large bonfire during the previous days. Other bonfires were lit all around the valley and on one mountain some people lit three huge crosses each year. The atmosphere was always great. Sometimes neighbours came over for a visit when they saw the bonfire was lit, some even went from one fire to the next, visiting several people. When the fire died down and the adults had one or more glasses of homemade Schnaps: everyone slowly went to bed. In the morning the Easter bunny would have hidden many nests with eggs and chocolate all around the orchard and my cousin and I had lots of fun searching them all – except for one year when the dog found them first.