NaJoPoMo: Who's Writing What, Where 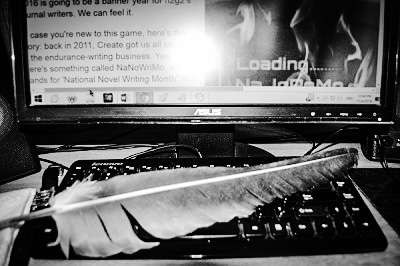 Yes, NaJoPoMo, that unique month of writer/reader/Editor torture, is well underway. So far, we've been entertained, scratched our heads over some puzzles, and enjoyed catching up with h2g2ers from around the globe.

As usual, some NaJo contributors ignored our requests to make this a user-friendly activity. The Editor is tired of being in the middle, and will no longer respond to any complaints, either a) that the request to make A-spaces interferes with the writers' creative flow, harshes their buzz, and also makes their brains hurt, and b) that all of those endless postings are making people's convo lists too full, and they're just going to un-friend everybody again, like they do every November. The Editor, who did not invent this particular form of insanity, has one thing to say to you all:

Whatever. The Editor has a lot of other things to say about the amount of contrariness and condescension that has come this way, but will refrain, because the Editor has also been watching a lot of Keith Olbermann rants lately and cannot be counted on to view the proceedings in anything resembling a rational manner. Don't annoy a hillbilly in an election year.

Now, that said, the following user-friendly writers have blogs you can actually find. Here they are, with links. They get the h2g2 Post Seal of Reader Approval.

The following people have informed the Post that they are writing NaJo blogs, but that they don't need no stinkin' links from us, thank you very much. Fine. Here's the list:

These people, though they are on the Editor's naughty list, are all actually writing very interesting journals. If you want to read, and aren't as lazy as the rest of this riffraff, go and find them. I will now get back to writing NaJo and cheering on Keith Olbermann as he cusses at politicians.

1Opinions vary. The Editor has heard them all.