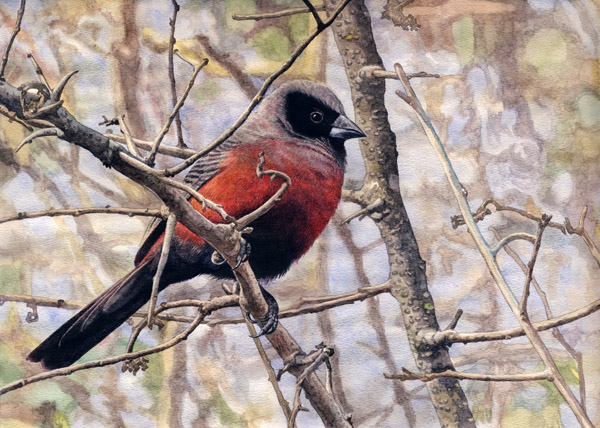 This little critter is a Black-Faced Waxbill, Estrilda erythronotos. It's sometimes called a Black-Cheeked Waxbill, but that name is now reserved for the very similar species, Estrilda charmosyna, which occurs in Uganda, Kenya, Somalia and Ethiopia. The black-faced waxbill lives in Southern Africa, and in Uganda, Tanzania and Kenya south of the black-cheeked waxbill's range. In South Africa, it is found in the northern parts, in fairly hot, dry savannah and thorn-tree country.


Waxbills form a family of small, seed-eating, finch-like birds, often very prettily marked and coloured. The name comes from the common waxbill, which has a bright red bill looking as if it were made of sealing wax. Waxbills are extremely diverse in Africa, with species ranging from scrubby semi-desert to dense rainforest, but most of them occur in areas with grasses for food and dense cover they can easily flee to. Two African species differ from the rest in eating mainly ants! Waxbills also occur in Asia and Australia (the popular zebra-finches being among them) but are absent from Europe and the Americas. In addition to the zebra-finches, several other species are popular as cage-birds, but I don't like that, much preferring to see them free in the wild or in my garden!


Where I live, black-cheeked waxbills are common in the veld, but you'll hear them more often than you see them. Small flocks of them flit from bush to bush, flicking their tails from side to side and cheerfully calling 'tweedle-leeeee', rising on the last note. They're very wary, and flee into dense cover at the slightest sign of danger. In the bush they look very dark, but with a good view you can tell that they're very prettily marked and colourful: they have the neat, black face masks, deep red underparts, and fine barring on their backs and wings. Like other waxbills, they're seed eaters, taking mainly grass seeds, off the stems or off the ground. They seem to like eating the grass seeds while they're still green.

Waxbills make nests from fine grasses, not quite as tightly woven as in the weavers, but forming compact balls with a nest chamber in the centre, and a thin tunnel leading to it. The black-faced waxbill, like its close relative the common waxbill, makes a second compartment at the top of the nest with its own entrance. This used to be called a 'cock's nest', the idea being that the male uses it to roost in while the female lays and incubates the eggs in the central chamber. Now it is believed that the upper compartment is not used by the waxbills at all, but is a 'fake' nest chamber to deceive predators. Entering it, they find nothing of interest, and hopefully leave. The real entrance is concealed at the bottom of the nest, surrounded by a funnel about 10 cm long, angled upwards to the nesting chamber.


There are other birds apart from waxbills who appear to employ similar deceit, with fake nest chambers or apparent nest entrances which lead nowhere, most notably the Penduline Tits, whom we'll meet in this column soon, I hope!


The black-faced waxbill also protects its nest by placing it high up amidst dense thorns of a tree. This is why it mostly occurs in thorny bushveld.


For these waxbills, breeding season is late summer to early autumn. The male courts the female by singing her a little song, made up from short phrases. The female waxbill lines the nest chamber with feathers, making it very cosy. After mating she lays her clutch of three to six eggs. Like other species, baby black-faced waxbills have colourful, shiny bumps and ridges inside their mouths. These give the mother a target for where she should put the food inside the gloom of the nest. She feeds the chicks by regurgitating seeds and insects from her crop. Unlike many other waxbill species, this one does not seem to be parasitized by whydahs or widow-finches. The babies, once fledged, join their mother and father in a small flock; after some time they may leave to join other or form new flocks.

When I came to Pietersburg (what Polokwane used to be called back then), for a long time I didn't see these delightful little birds. Once I started to recognize their calls, however, I started noticing them a lot. They even come to my garden from time to time! But the closest encounters I've had with them, was while joining our bird club in the bird ringing projects. These consist in capturing birds in fine nets, then measuring them, inspecting them, and putting rings or bands around their legs for identification purposes – especially helpful if they are re-captured later, for data on movements and longevity. These bands can even supply info if the birds are just photographed later on, the cameras of today being able to provide great detail. All in all, such ringing projects provide very large amounts of valuable scientific data about a great variety of species. 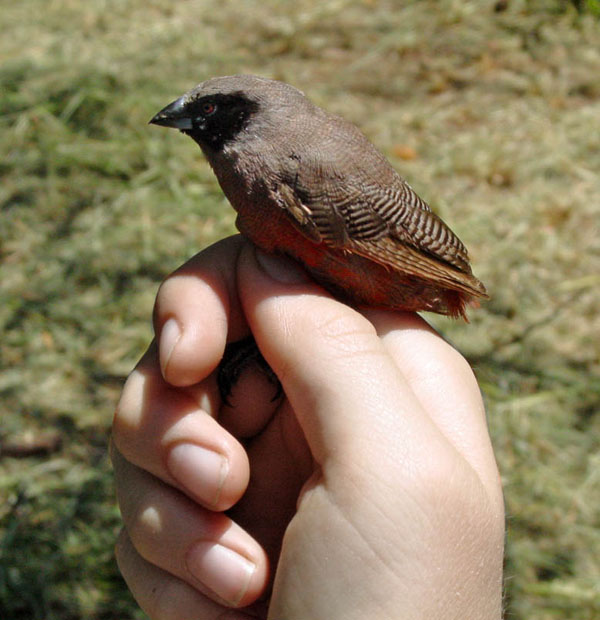 Unfortunately, this can be quite stressful on the birds. This little fella you see in the photo has lost all of his/her tail feathers! This is a stress response and sometimes happens. Fortunately, it could still fly well enough, and the tail feathers do grow back given time. But still, I feel back for the poor things, being scared and sometimes getting injured while struggling. Small birds are especially delicate, but I've seen even much larger and more robust birds getting seriously hurt.


At the present, black-faced waxbills are plentiful over a wide range in Southern and Eastern Africa, and as I've said, have in some regions adapted well to suburban gardens. They will come to bird feeders with small seeds. For now, these gorgeous little birds are not endangered.