Conspiracy fiction is not new. Enjoy this prequel to House of Cards from 1888. 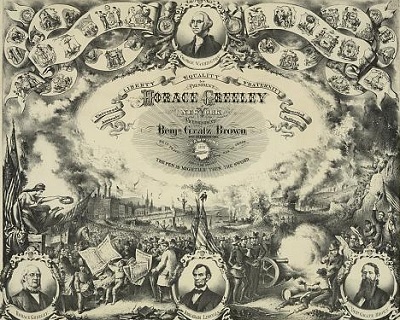 You think the political thriller is a new thing? Think again. Shakespeare's full of political shenanigans. Even in the staid Victorian world, moustache-twirling villains are in ur government, messin' wif ur democracy.

In this 2016 election year, we could do worse than study Conspiracy: A Political Tragedy, although we're not sure whether the playwright just doesn't know what a tragedy is, or if the term is being applied to the dialogue. 'On what legal points do you entertain any hopes?' is one of the pithier utterances. The West Wing, this is not.

We don't know anything about the author, one W.O. Andrae. We suspect this may be a pseudonym. (If anybody finds out, let us know, or better yet, write a Guide Entry.) He may have had good reason for hiding his identity in 1888. Do not mistake boring dialogue for a boring subject. Horace Greeley, a crusading New York newspaper editor1, is one of the main characters in this play, which is about the 1872 US presidential election. Greeley [SPOILER ALERT] is the only US presidential candidate who ever died during the electoral process2. He died after the popular election, but before the electoral votes could be counted. Three electors voted for him, anyway. I think those electors and Bernie Sanders supporters probably have a lot in common.

What's that you say? Who won the 1872 election? You really should keep up. It was Civil War general Ulysses S Grant. Voters hearted Grant like they liked Ike.

This play is really a lot like these modern TV dramas with sneering Machiavellian villains. Kevin Spacey should consider this play for summer stock revival. The dialogue is every bit as bad as the modern shows', too – that previous quote was just a sample. We want to suggest a Literary Corner project for you: take this dialogue and jazz it up some. Then we can send a treatment to Mr Spacey. He's sure to love it.

Grace. Oh, Harry, dear! I am so glad you have just come. Now help me to persuade uncle not to accept the candidacy.

Lawright. My darling, why should I? On the contrary, I think it my duty to urge Mr. Greeley to accept the nomination, which will in all probability be offered him before long.

Grace. How uncourteous you are; I won't love you anymore3.

Lawright. Dear Grace, this is politics, and politics are void of all sentiments.

Greeley (interrupting). Children, don't quarrel about that; I am myself in doubt whether I can consider such a proposition.

Lawright. You must consider it; the voice of the people is calling you4.

Grace. The people is a great monster without any consideration.

Greeley. Your love for me makes you speak thus; but, my dear child, the people are everything.

Grace. Are not the people mostly led by politicians5?

Greeley. A politician is a quack statesman, cunningly devoted to the promotion of party politics.

Lawright (with deliberation). The good spirit of the American people is now rising, and will quell all the corruptive leadership of truckling politicians6. Partisanship has had its day. The country wants a change; and every citizen knows that Horace Greeley will do the most good for the people in the highest position of our glorious Republic7.

1Greeley was a bit like the Post Editor, only with a less bizarre sense of humour.2Yet. There are some who entertain hopes that he is not the last.3We at the h2g2 Post have become weary of apologising for these oinkers. No, dear reader, women did not really talk like this in the 19th Century. They had not been lobotomised. Male playwrights just wished they talked like that, to eliminate the need for characterisation. Let us groan collectively and move on.4Why, the Twitter traffic alone…5Put this woman on the ticket. We'd vote for her. She's the only person in the conversation who shows signs of actually thinking.6What a great phrase to put on a poster: 'Down with truckling politicians!' Of course, somebody would claim you were insulting the great truckling industry, the basis of American prosperity…7Yawn.