Freewayriding's sense of freedom took him on the road. Part Two of the series.

A beautiful day dawned as the stupid English bikers huddled over yet another one of Rommel's maps.

How to ride 600 kilometres on a teaspoon of fuel?

Several rather good cups (way too small as I was used to the bucket mug I have for tea at home!) of coffee later and we had rather ruthlessly hacked out the scenic detours and settled on a straight run south. Nantes if we were forced East, Redon west in the search for fuel. The animated tv presenters on show in the cafe suggested it would not be an easy quest either way on the road south.

A short time later, with the Triumph gasping for breath, we pulled into one of those hyper market places. Once again French cuisine gave way to the only place open.....I will be forever embarrassed to admit the McDonalds breakfast was welcome.!

The signs and bollards over the fuel station were not.

Other bikers met along the way, French, Spanish and German also told a sorry tale of limping from town to town, the joy of the run marred by low fuel levels and the inability to go wandering. (incidentally you may have seen bikers randomly acknowledging each other on the roads, from the gentle nod or a slightly raised finger of us reserved English, the showy Spanish way they lean out of the saddle and almost bow as though touching the road, to the low down peace sign of the American and German riders, all these were replaced with a point to the tank and a thumbs up or down, signalling fuel availability in either direction...sadly more thumbs down than a Roman circus on meet the Christians day!)

Decision time, two of the lads were riding big Japanese and German tourers, all plastic, windscreens, heated seats and built in luggage. Not my cup of café au lait but they did boast petrol tanks with a range almost three times that of the stripped down English and American cruisers starving to death at their sides.

If...when...we ran out of fuel it was either siphon gas from the Axis powers, thereby extending our range but limiting theirs or allow them to ride ahead and try and bring back some fuel.....that's if we could find an open garage and be allowed to fill a can up.

Stiffening up our sinews we hit the empty roads again, turning off the main route onto smaller agricultural lanes, if we were to be stranded, at least give us some wonderful countryside to sit in. 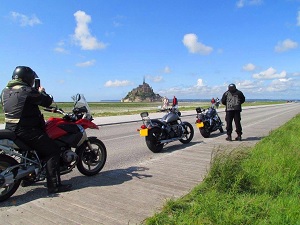 The French motorcycle gods must've taken pity after the burger incident and fifty yards ahead a gas station loomed. VIDE on the diesel but blessed unleaded still flowed through those gorgeous green veins!

Weight off and horses gorged to overflowing we saddled up and actually enjoyed the ride through some stunning countryside, beautifully clear roads and ever warming weather. The French insects seemed particularly fond of English biker beards, but hey, I had fuel so let them hitch a free ride for now!

Rocky had gone on and on about a place called le Mont Saint Michel, some medieval citadel apparently 'Growing out of the landscape'...hmm well, OK, we had fuel and would humour him. The Harley led the way into Avranches. There indeed, glimpsed across the sun kissed fields, appeared to be a city. And it did appear to be growing from the landscape, almost as though the Disney Castle and the Emerald City had enjoyed a wild night together back in the 800s. Stunning from a distance, magical even.

Can you ride there? Course you can! So we followed the rather loud American machine and were soon near enough to see Oz was in fact numerous buildings, seemingly carved out of the same mountain...or maybe the mountain was made from a ramshackle cluster of buildings some mad architect had thrown together as a drunken bet.

We stopped on the approach to take a few photos. As we saddled up a French scooter buzzed by , the rider waving, we followed. Ahead there was a barrier blocking the approach. The scooter didn't even slow down, merely weaved around the outer edge. We followed, must be there to stop heavy vehicles or something. By the time the bigger bikes were through the scooter was a speck in the distance, disappearing towards the emerald city via a beautifully laid causeway.

Half way to out goal I asked to stop to take even more pictures, there were horse drawn buggies using the causeway and a few ancient touristy buses, one small white car coming the other way, at quite a speed. I hoped the prat didn't scare the horses.

We heard the driver before we heard the car's tiny engine. Apoplexy is the word, yes apoplexy. This guy was ranting, red faced, spittle flying, voice screeching. The only thing about him unruffled were his immaculately coiffured locks and his chicly expensive sunglasses.

We got tout suite and non....not much else. Then he noticed the GB plates. The rant became positively Clouseauesque. We picked out – go. Stupide. Bikers. English. Go. Idiot bikers and Tout suite again. Then just a lot of very red faced arm waving and " Go. speed!" Screamed at us over and over again!

Apparently the national monument is protected and barred to traffic other than the buggies and buses. Oops, presume the scooter boy worked there, we stupid English bikers will never know, but it gave us a theme each time we cocked up! We reluctantly missed out on seeing Mont St. Michel up close and moved on. Tout suite!

A few on the spur detours, erm OK, we got lost again...several times, before heading out of the countryside, through some very pretty, almost Spanish looking villages towards the coast and our next overnighter.

The port of Saint Nazaire welcomed us with blazing sunshine and, gulp, traffic. Apparently the CRS had cleared a local blockade and fuel supplies had been delivered that morning to a quarter of the big petrol stations, we took the opportunity of topping the tanks up. Happy days!

We found our stop for the night, quite a little way out of town, unpacked the bikes and checked in with home. Still nothing at all on UK news, but with the EU referendum approaching I suppose I shouldn't have been surprised, then we went exploring.

Dockyards and train stations huddled together with the state of the art university campus. Chic shopping centres and theatres shared the road with traditional tabacs, markets and businesses. Peeling paint and wooden shutters shared the balmy air with smoked glass, marble and stainless steel.

A vibrant working town for sure. We did the planned trawl of the U-boat pens, now with added history of transatlantic sea travel features. This huge bunker, some parts left to decay slowly, home to countless pigeons, some preserved and renovated, some parts now the home of community arts programmes and tourists , still dominates the harbour. I left the lads drinking yet more rather pleasant coffee in the rather pleasant nineteen twenties oceanliner themed café and wandered off to take some rather pleasant photos. 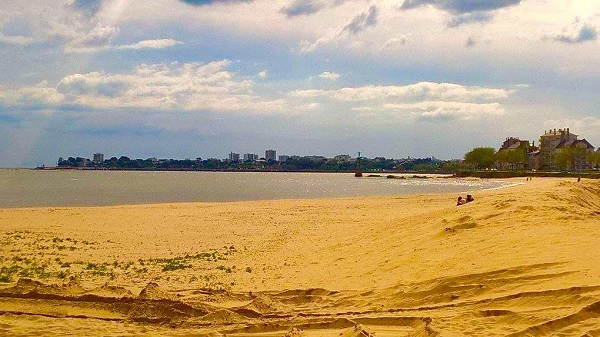 A French-American friend, born and raised in the town had requested some photos of the beaches from her youth. A twenty minute walk found me transported from industrial wartime to quaint harbour and beachfronts.

Twenty first century students and families basked in the sunshine, couples walked hand in hand along the promenade with the effortlessly casual style only the French can pull off without trying. Nobody seemed to notice the black clad scruffy biker with the beard full of wildlife snapping away around them, or if they did they were way too cool to comment.

I paused at the Anglo-French maritime memorial, flags hanging still in the sunshine, two worlds colliding around me. We had come to pay our respects to family who had given their lives for freedom.

The freedom enjoyed on this gorgeous beach sadly set against the monolithic concrete backdrop of an invading army's naval war machine. Another example. Nobody seemed to notice the artillery emplacement ten yards from the brightly coloured children's play area, or if they did they were still too cool to comment.

We all live with history, some celebrate it, some apologise and try and hide it; but others simply bolt on a café, adjust their expensively chic sunglasses and go to the beach!

I walked back through what was left of the "old" town, not a single building apparently prewar, everything flattened in an effort to blow those subs out of their concrete lair: still , the side streets were as pretty as a picture though.

That night we went out to eat, again not a single bar or restaurant was open, taxis and busses had stopped running at six. Once again we had a supermarket picnic supper.Even bought some grapes as we may have the time to make our own wine! The girl on the checkout told us the situation was critical, the government on the verge of bringing the army in, Paris and Nantes riots, blockades at ports still and now the nuclear and electricity power industries were threatening strike. The deliveries of that morning already gone as the city's engines drank deeply.

"How do you make it, it is not so sure?" Were her parting words.

The dilemma for the dawn was clear - do we carry on south , blockades still in place and fuel uncertain or head back north and play it safe?

We are bikers. We are English, but above all we are stupid...of course we went south!