My husband, Tom, and I will be celebrating our 20th anniversary on July 12, 20171. We are planning on finally making it to the UK, mostly because I've been wanting to meet my friends over there for almost as long as I've been on h2g2, and Tom, at this point2, just says he wants to see some castles. We're starting to actually set aside funds, instead of just saying we should, and I've started an account with a well-known crowdfunding site.

Even though the trip is over a year away, we3 are starting to think of just what we want to do and where we want to go. We have decided that we're not hiring a car, so we will be dependent upon public transport4. As a major part of this phase of planning, I've set up a map here so that people can suggest various places to visit, and to show me just where my UK friends are – or at least the nearest train station, so that no one has to show the world where their home is. If anyone does put a marker to show where they are, I just ask that h2g2 names be used, even if we're friends elsewhere and I know your real name, because I can't always remember who is who...

Placing a pin in the map is fairly straightforward, but just in case your caffeine levels are too low, or other levels are too high... Open the map, click on Additions, and then click on Add Marker. Do that before clicking on where you want to place the pin – you will have the option to either place to marker by clicking a spot on the map, or you can enter the address (if you know it). The Detailed version of Add Marker also allows you to enter the exact latitude and longitude. If you make a mistake, either using your real name instead of your h2g2 name or placing the marker in the wrong place, I'm the only person that has editing privileges. Just place a new marker, and let me know to delete the old – might be simplest in that case to just choose a different color marker for the new one, and tell me which color to take care of.

Isn't this a bit early? 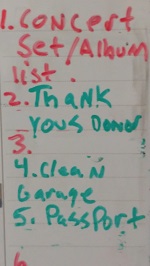 It could seem that planning a trip that will be, at the earliest, taken in mid-July 2017 in early June 2016 is a bit much – especially since we don't know how long we're going to be! But making the map will actually help us to decide how long to spend – we both work for schools, so the summer is open. The sooner we narrow down destinations and dates, the sooner meet(s) can be planned5!

1July 11th will be my 16th h2g2 anniversary, and PaperKid's 14th birthday...2May 20163Mostly me – Tom's thinking more of the boring practical stuff, as opposed to the more fun practical stuff.4Note to self: Look into Interrail.5While I'd rather meet my friends individually, and spend a full day with each and every one, I know that's not exactly practical. Especially since Tom is one that doesn't quite believe that you can be close friends with someone you've never physically met, even if you've been talking for over a decade...