Another fascinating tale from bobstafford. This one has a horse and famous people. 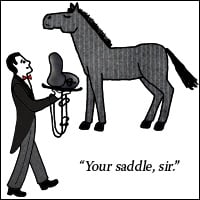 When I was younger I worked at a large riding school near Maidenhead, as one of the instructors and X Country course builders. We also had a livery yard and one of the horses was a big grey (white) called Jumbo.

He was an unusual horse: more of a charger than a horse, 17 hands and fearless. As he could be a handful I always was asked to exercise him, easily capable of a 2 meter fence and trained to respond to the slightest touch.

I always thought he was differently trained to the others and as it turned out he was trained in the army riding school.

One day around mid morning I saw him being fed handfuls of sugar cubes by a distinguished man, unmistakably military cloth cap, tweed jacket and military riding breeches and brown riding boots.

After a hearty greeting I prepared Jumbo, and he took him out, over the cross country course. The yard manager came up and asked how I got on with the Brig, fine I said, look after him he said he does not get time to come that often and he thinks a lot of Jumbo.

On his return I asked how he had got on, and he was evidently well pleased. He confessed he was rather busy and said 'trouser this fiver for looking after him,' and said he had duties that would keep him busy with 'Liz', and asked me to fill in for him keeping Jumbo fit and happy. I thought this was a pleasure and told him so and he shook hands and got in to his red Inspector Morse Jaguar and drove off.

On his next visit I asked him how did it go with Liz, he said fine takes a long time but it was a duty of his. Odd I thought and left it at that.

The Christmas of that year he gave me a bottle of Whisky White horse brand as a reminder of Jumbo. I liked the Brig and will always remember him taking Jumbo over a substantial table jump in the indoor riding school. I still have the bottle as a souvenir of this splendid man.

Finally out of curiosity I asked him about Liz.

He simply said, 'Oh Liz: that its a little informal; however, most people know her by her full formal name, which is, Elizabeth II Queen of the United Kingdom, Canada, Australia, and New Zealand, and Head of the Commonwealth.'

As a member of Her Majesty's Bodyguard of the Honourable Corps of Gentlemen at Arms. The bodyguard to the British Monarch.

Then who was the Brig? Well, as it turned out he was, that was more surprising,
Brigadier John Ormsby Evelyn 'JOE' Vandeleur DSO and Bar. Known as JOE the initials if his Christian names.

Michael Caine played the part of Lieutenant Colonel J.O.E. Vandeleur in the film a bridge to far.

Goes to show you never know who you are talking to.