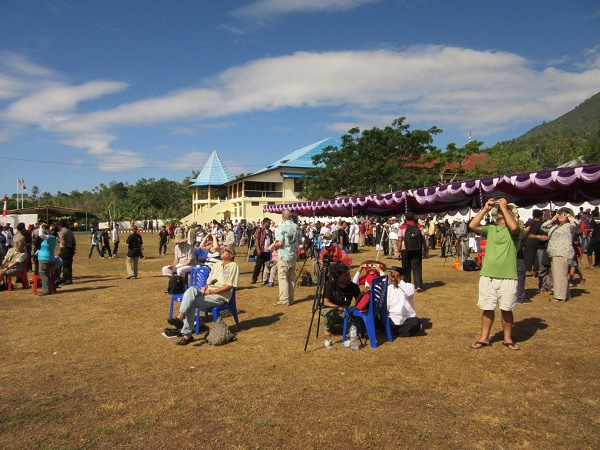 Our trip to see the total eclipse of the sun proved an amazing experience. We set out early from the island of Ternate and boarded the car ferry to nearby Tidore. There were six bus loads of Westerners, equipped with cameras, binoculars and tripods. As I watched from the deck, it looked unlikely that the buses would all fit in the ferry. But they did. We were heading for Tidore, as it was in the centre of the line which the total eclipse was predicted to follow. The Sultan had permitted us to watch from the grounds of his Palace.

Ternate and Tidore are small, volcanic islands in the Moluccas, towards the eastern end of the Indonesian archipelago. They were spice islands, and the trading of cloves and nutmeg made them rich and their sultans important. When we arrived, Tidore was bright with flowering trees: bougainvillea and frangipane, and the roads were lined with pennants in various colours. The Sultan's Palace has a large, grassy space with a view of the sea and a raised area behind, ideally placed for watching the eclipse. Two areas of seating had been set up under awnings.

When we arrived, we were greeted with a welcoming dance by a group of girls, dressed in red and twirling parasols. The eclipse watchers were soon busy setting up tripods and cameras. The Sultan walked across the grass, grand in gold-coloured jacket and black hat and accompanied by his retinue. Local people joined in: families with children, men in uniforms and schoolgirls in hijabs and long skirts. Young girls came up and asked if they could pose with us for photos. Boys asked where we came from. When I said south of London they replied: 'London? Arsenal, Tottenham Hotspurs, Chelsea.' They carried solar specs, mobile phones and lengths of bamboo.

At 8.36, we spotted the first notch at the top right of the sun. The morning cloud gradually cleared, giving a brilliant view. My husband took a series of exposures, using special solar filters. After a while, the light levels dimmed, shadows became unusually sharp and the temperature dropped. At 9.51, the sun vanished and the local people banged their bamboo drums. With binoculars, I was able to see a clear, bright edge to the dark disc and a pink prominence on the left. Ghostly coronal streamers appeared around the sun. After a few minutes, the sun's light flared and a lovely 'diamond ring' appeared.

After the total eclipse, people started milling about. Food was brought to one of the seated areas. The Sultan and the Mayor of Tidore both gave speeches. There were dances. The first, involving a group of young men and girls in gold costumes was decorous. The second started with lines of girls in short, white dresses and boys in bowler hats. However, the compère invited others to join in and, soon people of many races and ages were dancing. We helped ourselves to a buffet lunch, which included rice, vegetables, fish, langoustines and chicken. The local people joined in, the Sultan posed for photographs with tourists and everyone had a great time.