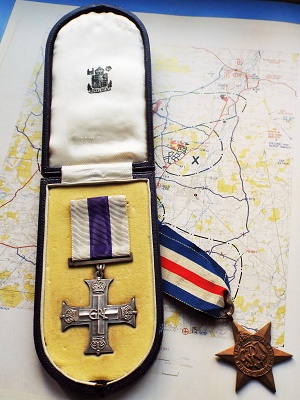 It's a pair of items that represent the memory of my father who seldom mentioned the subject of his activities in WWII. I have no idea about what he did so I am unable to relate his story in any detail so I only let the citation below tell its own story.

"Capt. G.H. B served as an Ammunition Officer in 284 Coy RASC (Inf Div Tps) from the time of landing in NORMANDY, when that Company was employed in the maintenance of the gun ammunition for the Royal Artillery of the Div, afterwards becoming the Supply Officer in 283 Coy RASC (Inf Bde) when the latter was made the Divisional Supply Company.

During the earlier part of the campaign Capt B was invariably serving in positions forward of normal maintenance limits, taking charge of heavy 'dumping' programmes, involving journeys usually under fire, and which by reason of the preparations involved had to be carried out by night.

During the second half of the campaign Capt. B was immediately responsible for the preparation, reconnaissance and operation of the maintenance dumps immediately behind the forward troops in the Siegfried Line operation, and the river crossing of the RHINE and ELBE.

As such he was continually under fire in the early stages of each operation, but so steadily carried out his reconnaissances and layout of the maintenance installations concerned that there was never the slightest doubt that the maintenance of the force would be impaired.

His grasp of the situation coupled with his fine sense of co-operation with all types of amphibious craft were far in advance of his age and length of service, whilst he was one of whom any extra responsibilities made him more eager to face the task ahead.

Capt. B's fine spirit and unfailing cheerfulness under all conditions were an example and a model, not only to the men under his command, but to officers and men whatever rank with whom he came in contact."

So the medals in the photograph represent more than I guessed, and how much he kept to himself. How many untold stories are there out there.