Treasured objects are the theme of this month's Create challenge. 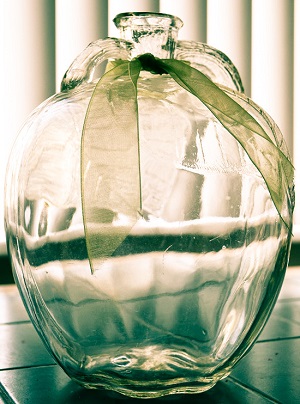 The jar could hold a gallon of White House apple cider vinegar, and once upon a time, it did. Thereby hang a couple of tales.

Tale One: A vinegar jar as history

Back in the 17th Century, apples saved the lives of European settlers in North America. The Jamestown lot were a bit too thick to realise they were dying from poor drinking water because that's what happens when you settle in a swamp. The Powhatan Indians could probably have explained it, but they had language and cultural barriers, and the silly settlers were too busy kidnapping Matoaka (that's Pocahontas to you)…anyway, once the apple trees bore and people made cider, they stopped getting sick.

No wonder they called Jesus an apple tree. No wonder Johnny Appleseed was so popular. But once the Temperance Movement set in, apple growers had a big problem.

Apples=alcohol=the Road to Ruin. Which is why you have to search for heirloom apples, or eat that mush they sell in the supermarket.

In the early 20th Century, apple growers got desperate. They even hired advertisers to come up with a way to get people to eat apples. The result? 'An apple a day keeps the doctor away.' No, it's not an ancient saying. It's an advertising slogan, so there.

Another way to get people to use apple products was to encourage more consumption of apple cider vinegar. A lot of advertising went into that, too. Consumers were informed that the Quality People always had a cut-glass vinegar cruet on their dinner table. That's also what this 1920s vinegar jar is about. It's shaped like an apple, you see, with leaves etched into it. Lots of ladies – like my great-grandmother – thought it was pretty and kept it around.

And my Dad handed it down to me because he thought I'd like to have something that belonged to my grandmother.

From as far back as I could remember, my grandparents' farm house was there, full of interesting smells and hypnotic atmosphere. The house itself wasn't that old – well, parts of it were. My Dad and his dad built it together shortly after World War II, to replace the ramshackle dwelling in which my Dad had been born. But like everybody else in the mountains, they used recycled house parts, so who knows how old some of it was. And everything inside the house was…well, old, from the iron beds to the heavy dining room furniture to the old upright piano that was just perfect for banging out ragtime tunes, as my great-greatuncle Hughes proved when he came around…

There was a beautiful (to me) china cupboard in the corner of the dining room. It wasn't deep, but it was fairly tall, a bit ornate, with a lot of wooden curlicues across the glass door. After all, china cupboards weren't just to store china: they were display cases for tasteful items.

My grandmother's idea of a 'tasteful' item was a store-bought coconut cake. Which is what I smelled whenever I stuck my head in there. Which I did fairly often because we kids liked to help 'set the table', and when we were visiting, there was a horde of people coming to sit around that big table and enjoy fried chicken and biscuits, sliced tomatoes from the garden, homemade cobbler made from berries we'd just picked, and lots of good, hot coffee or cold iced tea. In fact, there were so many people that they ran out of chairs. We kids always crowded onto the piano bench at the end of the table. Fine with us: less elbow room, but plenty of food. Somehow, I'd end up sitting right next to that china cupboard.

Which might explain why, when I finally had my own house to furnish in Philadelphia, and when I spotted the exact twin to Grandmother's china cupboard in an antique place on South Street, I pretty much jumped for joy. It's downstairs now in the living room.

And taking pride of place in it is that old vinegar jar.

Fabergé? Never heard of it. Crystal is in the mind of the beholder. Pick your own heirlooms, these are mine. 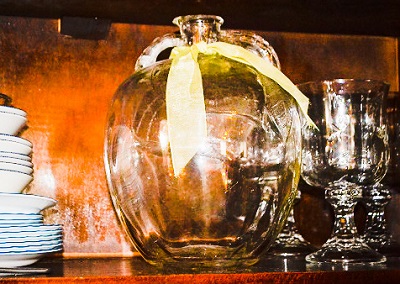