Why is Jesus Christ an Apple Tree? Content from the guide to life, the universe and everything 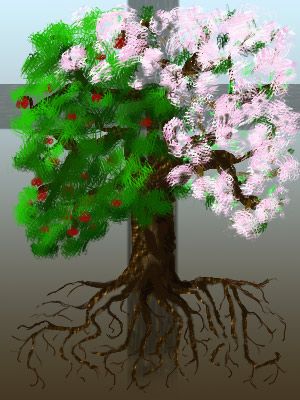 The tree of life my soul hath seen,
Laden with fruit and always green:
The trees of nature fruitless be
Compared with Christ the apple tree.

This is the beginning of a well-loved song. Many people sing it as a Christmas carol, although there is nothing in the words that refers to Christmas. The song, based on an anonymous poem1, first appeared in a New England hymn collection by a New Hampshire preacher in 17842. The most popular tune these days is the one set by the 20th-Century composer Elizabeth Poston.

Carol lovers find the song charming. Sung right, the tune will make the hairs on the back of your neck stand on end. But why is Christ an apple tree?

Can a Person Be a Tree?

His beauty doth all things excel:
By faith I know, but ne'er can tell
The glory which I now can see
In Jesus Christ the apple tree.

There is reference to an apple tree in the Song of Solomon. The Song of Solomon is a love poem, quite steamy in places. Most Jewish and Christian exegetes prefer to see the whole thing as symbolism.

As the apple tree among the trees of the wood, so is my beloved among the sons. I sat down under his shadow with great delight, and his fruit was sweet to my taste.
– Song of Solomon 2:3, Authorised Version

Not seeing the whole thing as symbolism leads to speculation as to the nature of the fruit which 'was sweet to my taste'. Be that as it may, the metaphor of 'person as tree', even apple tree, goes back pretty far.

But what do apples have to do with it?

For happiness I long have sought,
And pleasure dearly I have bought:
I missed of all; but now I see
'Tis found in Christ the apple tree.

It all began with the Tree of the Knowledge of Good and Evil. What was this Tree of Knowledge, anyway? According to Judeo-Christian lore, it was eating from this tree (in the Garden of Eden) that caused humans to be in a 'fallen', or impure, state – to be in need of supernatural help to redress the imbalance between man and the universe. In other words: somewhere back in the mists of time, the human species had taken a wrong turn. It was now exactly clever enough to get itself in a lot of trouble. This notion has been much pondered on in the last 2,000 years, even by thinkers who do not take old legends literally.

In Latin, malum means 'apple'. (The scientific name is Malus domestica.) The adjective malus, mala, malum means evil. Thus, it is thought, the question 'What was the fruit of the Tree of the Knowledge of Good and Evil?' was resolved in the Latin-using Middle Ages to the detriment of the apple's reputation. (Other candidates have included the fig and the tomato. 'Jesus Christ the tomato vine' doesn't have much of a ring to it.)

Apples, of course, are nutritious and good-tasting. To North Americans, they were also life-saving. The horrendous death toll at the first English-speaking colony, Jamestown, went down sharply as soon as the apple trees they planted had borne fruit. The reason? Cider. The moral of this story is: don't build your settlement (complete with outhouses) on a tidal river and then drink the water. You get typhus. If you must drink bad water, throw some alcohol in to kill the germs. The life-giving apple served its purpose as a cider ingredient until the late 19th Century, when encroaching teetotalitarians made it unpopular. Apple-growers were forced to hire an advertising company to convince consumers that apples were not just for drinking. 'An apple a day keeps the doctor away' helped save the trees and improve health.

In the West Country of England, there was the autumn custom of wassailing (serenading) the apple trees. These people, of course, were glad about the cider. Cider tended to play a rather large role in the Christmas wassailing tradition, as well. But this still doesn't explain why Jesus Christ is an apple tree.

I'm weary with my former toil,
Here I will sit and rest awhile:
Under the shadow I will be,
Of Jesus Christ the apple tree.

Back before the days of cider-drinking tree wassailers, Christians had many legends about the Cross on which Jesus died. St Helena, the mother of the emperor Constantine, claimed to have found the True Cross back in 326 AD. Of course, the object had healing powers – which explains its being broken up into so many pieces and sent to so many holy places. It was important to spread the goodness around.

This explains, in a way, why Jesus could come to be identified as an apple tree. The Cross – an instrument of torture and death – was made holy, and given a healing function, by its association with a sacred person. If the Tree of the Knowledge of Good and Evil – the cause of Adam's Fall – could be associated with the Cross, then the popular imagination would have satisfied the teachings of the Apostle Paul:

For as in Adam all die, even so in Christ shall all be made alive.
– I Corinthians 15:22, Authorised Version

Thus the conceit: by the first tree, all fell. By the second, all are made alive. The apple tree becomes a symbol of Christ.

The Tree of Life

This fruit doth make my soul to thrive,
It keeps my dying faith alive;
Which makes my soul in haste to be
With Jesus Christ the apple tree.

And as for this fragrant tree no mortal is permitted to touch it till the great judgement... It shall then be given to the righteous and holy. Its fruit shall be for food to the elect: it shall be transplanted to the holy place...Then blessed I the God of Glory, the Eternal King, who hath prepared such things for the righteous, and hath created them and promised to give to them.
– Book of Enoch 25:4-7

Many mythologies and philosophies worldwide include the idea of the cosmos as a tree: in Norse mythology, Yggdrasil, the sacred ash tree, sustained the world. In the study of kabbalah, a form of Jewish mysticism, the tree takes the form of a diagram in which cosmic balance is maintained by the interplay of various intangible qualities in the universe. The tree symbol is almost universal: Hindu, Egyptian, and Mayan cultures feature the tree – a sacred tree is mentioned in both the Bhagavad Gita and the Koran.

The symbolism of the song is complete. It is quite simple, really, and accessible to anyone, of any religion (or none at all), whether or not the lore involved is taken seriously. A tree is an organic thing: people should be organic, too, but are not – at least, not in their thinking. Human cleverness, as Russell Hoban's Riddley Walker would have said, is the root of humanity's problem. Human thought is also its hope of salvation. 'For as in Adam all die, even so in Christ shall all be made alive' – a new kind of fruit that turns the Tree of Knowledge into the Tree of Life. In 18th-Century New England, there were two trends: the Great Awakening, a movement to restore emotional fervour to religious observance, and the Enlightenment, the drive toward individualism and a love of learning. These two movements together formed the consciousness that created the American republican experiment, that was behind the words 'we hold these truths to be self-evident, that all men are created equal...'

And that is why, to a hymnodist in 18th-Century New Hampshire, Jesus Christ was an apple tree.

1The anonymous poem, signed only 'R.H.', is reported to have appeared in the London Spiritual Magazine in August, 1761. Source: Henry Sweetser Burrage Brown, Baptist Hymn Writers and Their Hymns, Brown, Thurston, and Company, Portland, Maine, 1888.2The collection was called Divine Hymns, or Spiritual Songs: for the use of Religious Assemblies and Private Christians. The author was Joshua Smith.3The Book of Enoch is not canonical for many Christians, which is why it is not available in the Authorised Version. However, it is canonical for the Ethiopian and Eritrean Orthodox churches.