This month has been Charlotte M. Yonge Month here at the Post. This week, we bid a reluctant farewell (quiet in the back) to the great author, or as she would call herself, authoress. We've seen Charlotte as historian, Biblical exegete, and chronicler of village life. Finally, we take a look at Charlotte at her finest – writing a grand historical novel with swords in. Like Star Wars, it's all about 'good' and 'evil'. Yeah, and it's epic, too. No, the swords don't go 'buzz' like a fluorescent on the fritz. This is the Past.

Plot? Seriously, you want a plot? Okay. Christina, the 'dove' of the story, is taken to the Eagle's Nest, natch, a castle high on a mountain near Ulm (um Ulm….), where she nurses a sick lady. Christina's kids are twin barons who have to decide whether to submit to some guy named Maximilian, who's a good Emperor, really. It's all an allegory about submitting to heavenly power, or some such.

The book gets a very positive review by a Reformed Presbyterian minister (they enjoy this sort of thing), and it was even made into a hit movie in 1913. Okay, maybe we exaggerated about the 'hit' part. The silent film starred James Cruze, not a relation to Tom. Cruze was a Mormon actor, who was married to at least three actresses, though not at the same time. We thought you'd enjoy knowing that.

So here it is. If you fall in love with this excerpt and can't live without more of the novel, here's the whole megillah on Gutenberg.

Dove in the Eagle's Nest 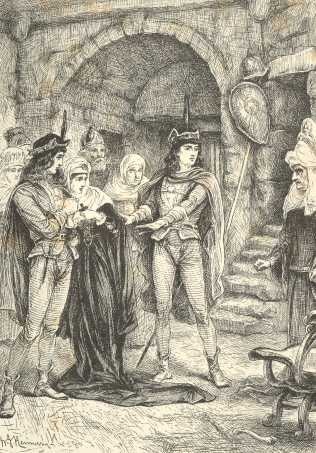 Ebbo would have amused himself with the dismay of his garrison a little longer, had not Friedel reminded him that their mother might be suffering for their delay, and this suggestion made him march in hastily. He found her standing drooping under the pitiless storm which Frau Kunigunde was pouring out at the highest pitch of her cracked, trembling voice, one hand uplifted and clenched, the other grasping the back of a chair, while her whole frame shook with rage too mighty for her strength.

"Grandame," said Ebbo, striding up to the scene of action, "cease. Remember my words yestereve1."

"She has stolen the keys! She has tampered with the servants! She has released the prisoner – thy prisoner, Ebbo! She has cheated us as she did with Wildschloss! False burgherinn2! I trow3 she wanted another suitor! Bane – pest of Adlerstein4!"

Friedmund threw a supporting arm round his mother, but Ebbo confronted the old lady. "Grandmother," he said, "I freed the captive. I stole the keys – I and Friedel! No one else knew my purpose. He was my captive, and I released him because he was foully taken. I have chosen my lot in life," he added; and, standing in the middle of the hall, he took off his cap, and spoke gravely: – "I will not be a treacherous robber-outlaw5, but, so help me God, a faithful, loyal, godly nobleman."

His mother and Friedel breathed an "Amen" with all their hearts; and he continued,

"And thou, grandame, peace! Such reverence shalt thou have as befits my father’s mother; but henceforth mine own lady-mother is the mistress of this castle, and whoever speaks a rude word to her offends the Freiherr von Adlerstein."

That's such a great moment, we'll leave it there. Read more at your peril: Charlotte is addictive. Sort of like a soap opera with really cool costumes.

1A cool way of saying 'last night'. These folks talk posh.2Translation: 'That was such a lower middle-class thing to do.'3It means 'believe'. They're overdoing the posh talk.4'The heroes reveal their humanity in their foolishness and stubbornness.' Rev Snapp's review.5This was a serious career choice in fifteenth-century Germany.