February's Literary Corner is dedicated to the immortal Charlotte M. Yonge, that great British novelist so admired by Bluebottle. Fortunately, February is a short month.

Several Paragraphs in Which Nothing at All Happens

From Chapter 1 of The Heir of Redclyffe. 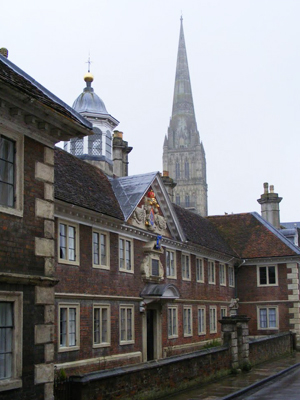 The drawing-room of Hollywell House was one of the favoured apartments, where a peculiar air of home seems to reside, whether seen in the middle of summer, all its large windows open to the garden, or, as when our story commences, its bright fire and stands of fragrant green-house plants contrasted with the wintry fog and leafless trees of November. There were two persons in the room – a young lady, who sat drawing at the round table, and a youth, lying on a couch near the fire, surrounded with books and newspapers, and a pair of crutches near him.

Both looked up with a smile of welcome at the entrance of a tall, fine-looking young man, whom each greeted with 'Good morning, Philip.'

'No way remarkable, thank you,' was the answer, somewhat wearily given by Charles.

'Where's my uncle? I called at the post-office, and brought a letter for him. It has the Moorworth post-mark,' he added, producing it.

'That old Sir Guy! What can he have to do with my father?'

'Did you not know,' said Philip, 'that my uncle is to be guardian to the boy – his grandson?'

'Yes,' said Philip; 'when old Sir Guy made it an especial point that my father should take the guardianship, he only consented on condition that my uncle should be joined with him; so now my uncle is alone in the trust, and I cannot help thinking something must have happened at Redclyffe1. It is certainly not Sir Guy's writing.'

'It must wait, unless your curiosity will carry you out in search of papa,' said Charles; 'he is somewhere about, zealously supplying the place of Jenkins.'

'Really, Philip,' said Laura, 'there is no telling how much good you have done him by convincing him of Jenkins' dishonesty. To say nothing of the benefit of being no longer cheated, the pleasure of having to overlook the farming is untold2.'

Philip smiled, and came to the table where she was drawing. 'Do you know this place?' said she, looking up in his face.

'Stylehurst itself! What is it taken from?'

'From this pencil sketch of your sister's, which I found in mamma's scrap book.'

'You are making it very like, only the spire is too slender, and that tree – can't you alter the foliage? – it is an ash.'

'And surely those trees in the foreground should be greener, to throw back the middle distance. That is the peak of South Moor exactly, if it looked further off.'

She began the alterations, while Philip stood watching her progress, a shade of melancholy gathering on his face. Suddenly, a voice called 'Laura! Are you there? Open the door, and you will see.'

On Philip's opening it, in came a tall camellia; the laughing face, and light, shining curls of the bearer peeping through the dark green leaves.

'Thank you! Oh, is it you, Philip? Oh, don't take it. I must bring my own camellia to show Charlie.'

'You make the most of that one flower,' said Charles.

'Only see how many buds!' and she placed it by his sofa. Is it not a perfect blossom, so pure a white, and so regular! And I am so proud of having beaten mamma and all the gardeners, for not another will be out this fortnight; and this is to go to the horticultural show. Sam would hardly trust me to bring it in, though it was my nursing, not his.'

'Now, Amy,' said Philip, when the flower had been duly admired, 'you must let me put it into the window, for you. It is too heavy for you.'

'Oh, take care,' cried Amabel, but too late; for, as he took it from her, the solitary flower struck against Charles's little table, and was broken off.

'Never mind,' she answered; 'it will last a long time in water.'

'It was very unlucky – I am very sorry – especially because of the horticultural show4.'

'Make all your apologies to Sam,' said Amy, 'his feelings will be more hurt than mine. I dare say my poor flower would have caught cold at the show, and never held up its head again.'

Her tone was gay; but Charles, who saw her face in the glass, betrayed her by saying, 'Winking away a tear, O Amy!'

There is a rumour that the Seinfeld show wanted Charlotte to join their writing team, and were disappointed to learn that she'd died.

1This is A Clue. There may eventually be A Plot.2We gather that Jenkins was the farm's overseer. However, such economic considerations are boring compared to what the young people are doing, and will be treated as such.3Plot or no plot, horticultural details are important, because this is England.4As we said before, this is England.