What did Ben Franklin have in common with Robbie Stamp?

Swimming is good exercise. Ben knew that. While in England, he was twice invited to become a swimming coach. 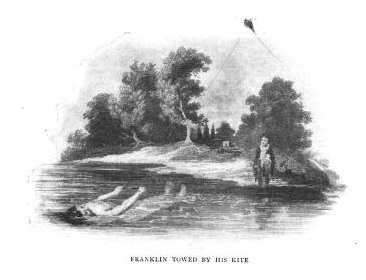 At Watts's printing-house I contracted an acquaintance with an ingenious young man, one Wygate, who, having wealthy relations, had been better educated than most printers; was a tolerable Latinist, spoke French, and lov'd reading. I taught him and a friend of his to swim at twice going into the river, and they soon became good swimmers. They introduc'd me to some gentlemen from the country, who went to Chelsea by water to see the College and Don Saltero's curiosities. In our return, at the request of the company, whose curiosity Wygate had excited, I stripped and leaped into the river, and swam from near Chelsea to Blackfriar's1, performing on the way many feats of activity, both upon and under water, that surpris'd and pleas'd those to whom they were novelties2.

I had from a child been ever delighted with this exercise, had studied and practis'd all Thevenot3's motions and positions, added some of my own, aiming at the graceful and easy as well as the useful. All these I took this occasion of exhibiting to the company, and was much flatter'd by their admiration; and Wygate, who was desirous of becoming a master, grew more and more attach'd to me on that account, as well as from the similarity of our studies. He at length proposed to me traveling all over Europe together, supporting ourselves everywhere by working at our business. I was once inclined to it; but, mentioning it to my good friend Mr. Denham, with whom I often spent an hour when I had leisure, he dissuaded me from it, advising me to think only of returning to Pennsylvania, which he was now about to do.

I must record one trait of this good man's character. He had formerly been in business at Bristol, but failed in debt to a number of people, compounded and went to America. There, by a close application to business as a merchant, he acquired a plentiful fortune in a few years. Returning to England in the ship with me, he invited his old creditors to an entertainment, at which he thank'd them for the easy composition they had favoured him with, and, when they expected nothing but the treat, every man at the first remove found under his plate an order on a banker for the full amount of the unpaid remainder with interest4.

He now told me he was about to return to Philadelphia, and should carry over a great quantity of goods in order to open a store there. He propos'd to take me over as his clerk, to keep his books, in which he would instruct me, copy his letters, and attend the store. He added, that, as soon as I should be acquainted with mercantile business, he would promote me by sending me with a cargo of flour and bread, etc., to the West Indies, and procure me commissions from others which would be profitable; and, if I manag'd well, would establish me handsomely5. The thing pleas'd me; for I was grown tired of London, remembered with pleasure the happy months I had spent in Pennsylvania, and wish'd again to see it6; therefore I immediately agreed on the terms of fifty pounds a year, Pennsylvania money; less, indeed, than my present gettings as a compositor, but affording a better prospect.

I now took leave of printing, as I thought, forever, and was daily employed in my new business, going about with Mr. Denham among the tradesmen to purchase various articles, and seeing them pack'd up, doing errands, calling upon workmen to dispatch, etc.; and, when all was on board, I had a few days' leisure. On one of these days, I was, to my surprise, sent for by a great man I knew only by name, a Sir William Wyndham, and I waited upon him. He had heard by some means or other of my swimming from Chelsea to Blackfriars, and of my teaching Wygate and another young man to swim in a few hours. He had two sons, about to set out on their travels; he wish'd to have them first taught swimming, and proposed to gratify me handsomely if I would teach them. They were not yet come to town, and my stay was uncertain, so I could not undertake it; but, from this incident, I thought it likely that, if I were to remain in England and open a swimming-school, I might get a good deal of money7; and it struck me so strongly, that, had the overture been sooner made me, probably I should not so soon have returned to America….

Thus I spent about eighteen months in London; most part of the time I work'd hard at my business, and spent but little upon myself except in seeing plays and in books. My friend Ralph had kept me poor; he owed me about twenty-seven pounds, which I was now never likely to receive; a great sum out of my small earnings8! I lov'd him, notwithstanding, for he had many amiable qualities. I had by no means improv'd my fortune; but I had picked up some very ingenious acquaintance, whose conversation was of great advantage to me; and I had read considerably.

From The Autobiography of Benjamin Franklin, Part 1, 1771.

1Where we hope his lack of clothing was not noticed.2English people were easily entertained in those pre-BBC days.3The beautifully-named Melchisédech Thévenot (1620-1692) wrote The Art of Swimming (in French), which popularised the breaststroke. Here are some pictures. (We like the one that shows how to cut your toenails in the water.) Thévenot also invented the spirit level, but it is less photogenic.4We wish we had this man around today. We would put him in charge of the Federal Reserve.5Just think: Ben Franklin could have become a successful businessman, instead of the wastrel he turned into.6Before you sneer, 'Oh, yeah,' remember that Philadelphia at the time was the second largest city in the British Empire.7Another good job opportunity wasted.8Ralph: you are named and shamed for all history.