Sometimes, nature just invites you to come out and play. 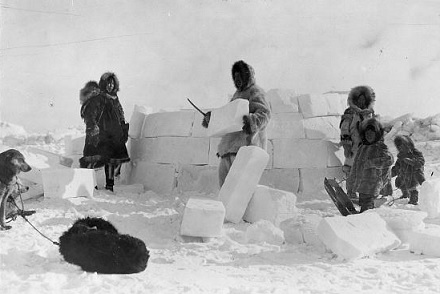 It started snowing on Boxing Day 1962 and the snow just kept coming. The layers built up: some were soft snow and others little hailstones, and soon the roads were blocked. I was 12 but we must have been made of tough stuff in those days because we were expected to go to school. I walked two miles in wellingtons.

Our road was covered with inches of hard packed ice. Most of the householders cleared the pavements in front of their houses, building piles of ice and snow along the edges, until they resembled fortifications. One day a neighbour started clearing the road and soon everyone joined in with shovels and pickaxes. A milk float drove through and everybody cheered.

There was a problem: what to do with the blocks of ice and snow. My older brother decided to build an igloo. He was an engineering draughtsman and excelled at knowing how to make things.The biggest slabs went in the bottom layer, and the doorway was crowned with a big lintel block. I helped by carrying blocks from the road and plastering the cracks with snow. From the doorway, the blocks grew smaller and met in a curved top. I had to stoop to get inside but I could then stand up and pretend to live there like an Eskimo. My igloo lasted a couple of months and I still have photos.