Wars and rumours of wars abound. Did you know that the United States and Great Britain almost went to war in 1859? The dispute was over a small island called San Juan, off the Pacific Coast near Washington state.

The fact that the pig remained the only casualty of the Pig War was partly due to adroit handling of the affair by a number of people, including Captain Pickett (yes, that Pickett). But the mail was funny. Read on to learn about… 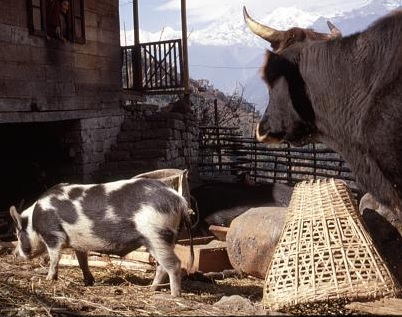 Sir: In compliance with your request, I transmit herewith a communication embodying the facts and occurrences with regard to the occupation of the island of San Juan.

I have the honor to be, very respectfully, your obedient servant,

The first permanent occupation of the island of San Juan was effected on the 13th day of December, 1853, by the landing from the Hudson's Bay Company's steamer "Beaver" of a flock of 1,300 sheep, under charge of Mr Charles J. Griffin, then a clerk, now a chef trader in the company's service, and who has ever since remained on the island in charge of their property and interests....

Statement and valuation of sheep, the property of the Hudson's Bay Company forcibly seized and carried off, on March 30, 1855, by Ellis Barnes, sheriff of Whatcom county, Washington Territory, aided and abetted by the armed posse of said county, in the name and behalf of the United States of America... 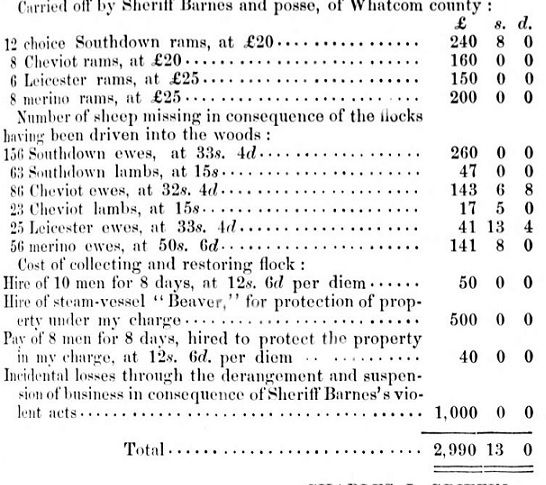 We regard these sheep as prisoners of war in the Pig War. Baa, ram, ewe…

SIR: In answer to the complaint made by William Moore, of alleged injustice received at the hands of the civil authority of Washington Territory, and forwarded by Governor Douglas, on the ground that the complainant is a British subject, I have to state that some sixteen months since this man was sick and destitute at Whatcom, and was taken care of by the authorities at that place at an expense to the county of nearly three hundred dollars. He then claimed to be an American citizen, and so far from abandoning that claim, during the latter part of July and the earliest part of August, when there was serious apprehension of a collision, made himself extremely useful in obtaining and conveying information with regard to the English movements...

Since the 10th of August last, I have been in command of the United States troops, who held the military occupancy of the island of San Juan. During this time H.R. Crosbie, esq., held the office of justice of the peace on the part of the Territory of Washington.

Collision with the British naval forces, to arrive from the threatened conflict between the civil authorities of the island, has at times been quite imminent.

That no such collision has taken place is, in my opinion, due, in part, to the prudent, conciliatory, and patriotic manner in which Mr. Crosbie has performed the duties of his office.

That's all the documentation we've got, and while we're sorry about the pig, we are glad there were no further casualties in this epic frontier struggle. We applaud Mr Crosbie and Lt Casey for their restraint, and admire Casey's liberal use of commas, intensely. (Subeditors take note.)

Next week, we'll see if we can't find you a really obscure war to read about. Enough of this major drama stuff.