An author of oldies but baddies…

Who in the World Was Ossian E Dodge? 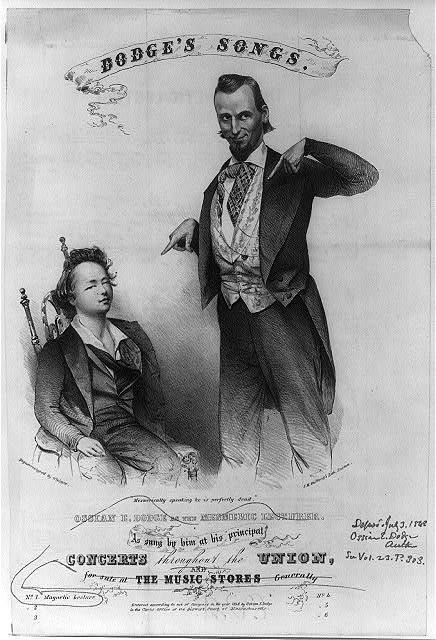 A couple of weeks ago, our Awix asked the plaintive question, 'Who's Selma?' It turns out he was talking about the film, which concerns historic doings in Selma, Alabama, USA. Now, I knew where Selma was, and why it was important, but that set me thinking: where did the name come from? Was there a tale behind that?

It turns out that Selma was named for Songs of Selma, the part of the Ossian corpus that contains, among other things, the 'Apostrophe to Fingal'. If Fingal is missing an apostrophe, I hope he's got it by now. As you may know, the Ossian poems were a hoax perpetrated by a Scotsman named Macpherson back in 1760. That sort of pseudo-epic flim-flammery was extremely popular with the hyena capitalists who created the monster called King Cotton back in the day. Which is a very weird connection to the Selma movie, which is about a civil rights march in the 1960s. So that's that problem solved.

The extreme popularity of Ossian in the early 19th Century might explain the name of our subject, one Ossian Euclid Dodge, born 1820 in Cayuga, New York1.

Dodge was a comic entertainer, and he was in the music publishing business, too. His group, Ossian's Bards, toured all the high-toned New York State resorts back then, spreading their 'chaste entertainments'2 and singing knee-slapping favourites like 'Level and the Square' and 'Temperance Shout of Liberty'.

When first the temperance banner waving,

Hail, when the glorious lay

Ossian's Bards were popular, for reasons not really clear to us. However, if you think they haven't affected us down in the 21st Century, think again. Ossian Dodge and his jolly (but chaste) comic songsters made a song popular that is still recorded today!

And no, it has nothing to do with temperance. It has coyotes instead.

We speak, of course, of that perennial cowboy favourite, Bury Me Not on the Lone Prairie. Were it not for the imaginatively-named Ossian Euclid Dodge, we would not have this deathless musical treat. Although he died in relative obscurity in London in 1876 – possibly sharing the sad sentiments of Mr Cash here – Dodge left his footprints on the strand of Cayuga Lake.

Now, aren't you glad you know all that? Go out and share it with some unsuspecting victi-….er, eager knowledge-seeker.

1Don't get me started on Cayuga. Rod Serling was born in Syracuse, New York, and grew up in Binghamton. He called his production company 'Cayuga' for the nearby lake, no doubt. And Dodge owned a copy of a famous photo of Edgar Allan Poe, called the 'Ultima Thule Daguerreotype'. Names like 'Thule' were really resonant and awesome back then.2Explanation for the Prof: It means the jokes were all clean, Prof. Just like the ones you post on h2g2.3Okay, Prof, this one won't make sense to you. They're trying to stop blokes from drinking. I'm sure they weren't big in Yorkshire.