On the evening of Saturday 3rd January, the 51,000 tonne ship Höegh Osaka, was deliberately stranded on a cricket pitch in the middle of the Solent, the stretch of water that separates mainland Britain from the Isle of Wight. The Solent is one of the busiest waterways in the world, as it leads to the Royal Navy's dockyard at Portsmouth, Cowes is the home of international yachting. And Southampton, which as well as being Britain's main cruise terminal is also a major cargo and container port, and is the port that the RMS Titanic left from. So although ships are common to the area, it isn't every day you see a stranded cargo ship at an odd angle. 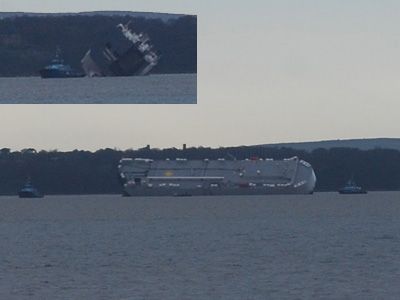 The Brambles Sandbank is located off the Isle of Wight and is a well-known hazard to navigation. However for about one hour a year, during the year's lowest tides, it is uncovered and the annual cricket match takes place there. The Island Sailing Club represents the Isle of Wight and the Royal Southern Yacht Club, based in Hamble, represent Hampshire. Because it isn't actually possible to play a full innings of cricket in the hour, especially as the pitch is soon waterlogged, Hampshire and the Isle of Wight take turns to win.

The Höegh Osaka (locally pronounced 'that gurt big ship') is a fairly modern cargo ship built in 2000, owned by Höegh Autoliners and registered in Singapore. Designed to carry up to 5,400 cars, it was carrying only 1,400 cars to Germany when it left Southampton at 8:20pm. 1,200 of these cars were luxury vehicles, Jaguars and Range Rovers made by Jaguar Land Rover, in addition to 65 Minis, 105 JCBs and one Rolls Royce Wraith worth £260,000 - the cars' total value is believed to be over £35million. However shortly after leaving the port of Southampton the crew realised that it was listing dangerously to one side and so the crew deliberately manoeuvred the ship to capsize on the Brambles sandbank, with all aboard safely rescued by the RNLI, coastguard and local lifeboats.

The crew's act has since been applauded as it meant that the ship did not capsize somewhere that will seriously impact marine traffic to Southampton1, the ship is positioned somewhere where it should be able to be recovered. As the ship is now at a 45° angle, whether the cars on board are salvageable is another story...

Inexplicably, despite maritime tradition, the captain of the vessel did not go down with his ship. Mind you, as the Höegh Osaka has not actually sunk there is presumably no need for him to deliberately drown himself and so instead we assume he is spending his time leaning at a 45° angle like his vessel.

Höegh Osaka and Me

My first contact with the Höegh Osaka came in the early hours of Saturday morning, when I was crossing the Solent to visit my grandmother, who had recently had a stroke. I boarded the Red Jet catamaran passenger ferry, and sat in the middle. Not having seen the news that morning, I was unaware at the time of the Höegh Osaka. I did hear some people talking about 'seeing the ship', but assumed they were talking about one of the cruise liners, which tourists often make a fuss about. Yet if you cross the Solent often, and as I have commuted to work by ferry, seeing either one of Cunard's Queens, Royal Caribbean's [Insert Name Here] of the Seas or P&O's vessels becomes commonplace and I didn't take much notice until it was too late.

I heard what had happened after I disembarked, when it was still commonly believed that the ship, despite satellite navigation, sonar, radar, digital charts etc had simply run aground and fallen over, like the QE2 did back in 2008. The full picture didn't emerge until later that day.

By the time I had caught up with family and friends and was on my way back across the Solent, it was dark. So I did see the ship on the way back, but as it was dark, the photo I tried to take on the fast-moving ferry through the sea-stained windows came out as a very blurred streak of light. I knew I would have to return.

The ship quickly became the region's most popular tourist attraction, with people coming from miles around to see it. Ice cream vans were swooping down to the areas closest to the scene to cater for the spectators who expect to purchase an ice cream whenever they visit a beach. I personally was wondering if I could get a stick of rock making machine; if I could make rock with Höegh Osaka written through it, I'd doubtlessly make a fortune...

Calshot Spit, where Calshot Castle and three lighthouses are located was a popular place to see the ship from. I asked my wife if she wanted to drive the kids down to Calshot to see the ship, but as the weather forecast was for a cold, wet, miserable January, she wasn't interested.

But as someone who has written over 30 ship-related articles, 21 of which are about shipwrecks around the Isle of Wight since Roman and Mediæval times and two about the Titanic (one co-written), as well as numerous ship-themed Post articles, I could not allow this event to take place on my doorstep without getting a proper look.

My plan was simple. The passenger ferry obviously moves too fast to get a good view, even if you could see out through the fogged up, sea-sprayed glass. The solution, then, was to go on board the car ferry. Instead of taking 22 minutes to cross the Solent, the ferry would instead take an hour and with two outer passenger decks, it would be easy to see the ship from the outside. As the latest news reports stated that one of the JCBs had broken loose and had inadvertently dug a hole through the side of the vessel, letting in more water than expected, and so the ship would not be moving anywhere for longer than expected, I was confident that there'd be time to see it. Yet an hour later it was announced that the ship had unexpectedly floated off the Brambles sandbank and was drifting away on its own. It was announced that salvagers would be moving it out of the way somewhere, but where? Had I missed my chance to get a proper view?

The following day, Thursday 8 January, it became clear that the ship had been towed to a position 2 miles off Lee on Solent2. The UK was experiencing severe storms with up to 100mph winds in the north, and though not that bad in the Solent, it was definitely rather breezy and choppy weather. Yet despite the strong winds, poor visibility and generally dark, stormy weather, I was determined to try and see the ship, even if the conditions were not in my favour.

With a friend I headed down to Lee on Solent for lunchtime. Despite the distance, dark sky and poor visibility the ship was clear to see, fortunately still on its side. It was also clear that it was having a hard time. Despite the numerous tugs trying to keep it in one place, it was being tossed around the water, rotating like a spinning top, and for all of its 51,000 tons, was still acting like a leaf on a pond. The ship later hit and damaged one of the tugs trying to keep it in place.

One of the parts of the story that I am fondest of is how, after this happened, the man prominently interviewed by the national news was Admiral West, Baron West of Spithead. He is also the Chancellor of Southampton Solent University, where I work, and so I know how qualified he is for the job of being interviewed about the ship3.

Lord West is Baron of Spithead, the eastern part of the Solent outside Portsmouth Harbour. Although the Brambles Sandbank isn't part of Spithead, it's fairly nearby. Lord West, as a former head of the Royal Navy, also knows about ships. Lord West's job, before he retired, was to prevent the Solent from being defeated by anything up to and including a nuclear strike. As no nuclear attack has occurred on the Solent, we can assume he was quite good at his job, and though it isn't an atomic holocaust, a ship falling over is the closest thing we've had to one lately.

Admiral Lord West also knows a thing or two about sinking ships, as the frigate he commanded during the Falklands War, HMS Ardent, was sunk by the Argentine Air Force (he heroically was the last to leave his ship and was awarded the Distinguished Service Cross. Though not actually going down with his ship, it's close enough so we'll let him off).

When asked for his expert considered opinion on these developments, he replied,

I think there were around 1,400 rather expensive cars on board.

When pressed about why the ship was listing up to 52°, he stated that in his expert view there was some terrible stability problem.

1An exclusion zone has been put in place around the ship, but this has had minimal impact on the area and vessels are still able to access Southampton almost as normal.2A town in Hampshire close to Gosport, also sometimes spelt 'Lee-on-the-Solent' but normally pronounced with a silent 'the'.3He is also famous for being just good friends with Frida from Abba, though this is not relevant to the ship.