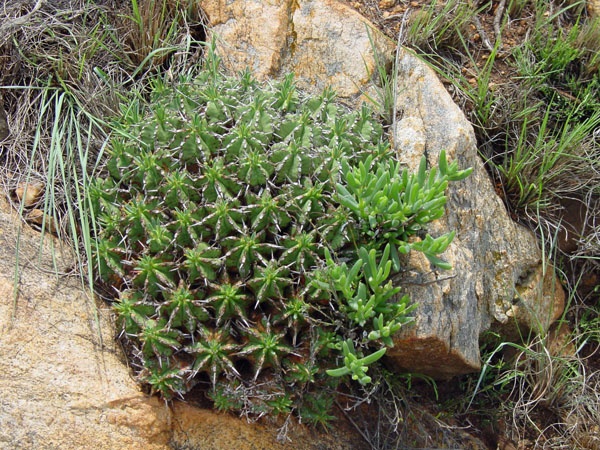 Back to South Africa for this column! This time I feature Euphorbia pulvinata, the 'cushion Euphorbia'. I've discussed Euphorbias before in this column. They are a genus of plants, growing almost world-wide, and consisting of a huge number of species. They range from small herbs and weeds to big trees. Many, though not all, of the species are succulent. In South Africa, the succulent Euphorbias are especially interesting for the incredible range of shapes and growth forms they display. This particular Euphorbia is one of the best examples of one of those, namely the cushion-plant form! The first photo shows an excellent specimen. It consists of hundreds of little angled, spiny, succulent stems, pressed closely together and all rising to a uniform height, forming a broad, rounded mound, so solid that you can stand on top of it. These 'cushions' can grow more than a metre/yard wide, indeed perhaps as much as twice that, in a very old specimen. These euphorbias often grow wedged between rocks, filling in the spaces between them without much rising above the surface of the land. 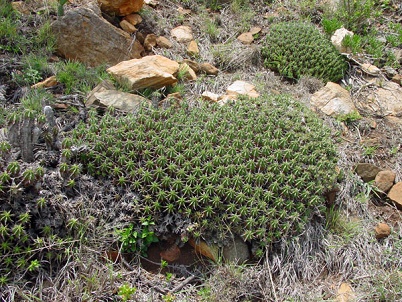 The Euphorbias in these photos all grow on a farm of a friend of mine. The farm is a bit to the east of my home town of Polokwane, in the northern foothills of the Wolkberg mountains. These are the first wild cushion Euphorbias I've seen. I have actually seen them long before in cultivation, and indeed I even grow them in my garden! On the farm, these euphorbias occur in the drier parts on the northern slopes of the western section of the hills. They grow in a kind of savannah woodland, with a well-developed grass layer amidst which many trees and shrubs are interspersed. Many of the euphorbias receive some shade and shelter from the trees and shrubs. But they can also grow entirely out in the open.

These ones are somewhat anomalous when considering the species as a whole. It has a very wide range in South Africa, unlike many other euphorbia species which grow only in very specific regions. The cushion euphorbia extends from the Soutpansberg mountains in the farthest north of South Africa, down along the eastern mountain ranges and highveld regions to the Eastern Cape Province in the south. Over this range they grow in a variety of habitats, the only constant being that they grow in mountainous or high-lying terrain. But generally the species is associated with rocky, open grassland. Wedged between rocks, these have some protection against grass fires, but also the low, mound-like form gives the plant protection. The succulent stems themselves always have a high content of water, and there are no dry leaves or bark that can easily catch fire. Also with their being so low, the fire tends to pass right over the plants' heads. If there's any fire damage, it will only be around the edges of the mounds.


Another interesting feature of the cushion euphorbia is that it is unusually tolerant of cold, wet conditions. Most euphorbias, indeed most succulents, grow in dry regions. Their succulence indeed is an adaptation to dry climates. They store water in their succulent leaves, stems and/or roots, enabling them to survive long droughts. But the cushion euphorbias sometimes grow in quite wet mountain regions, receiving heavy falls of rain as well as frequent mist and fog. In addition, these high-lying areas experience sometimes quite intense winter frosts. The cushion euphorbias happily survive this kind of weather. Their succulence aids them because even here, there can be long winter droughts, and very hot summer temperatures during which water can rapidly evaporate. Indeed, this species does also grow in much dryer regions, where its succulence helps it to survive equally well. The species can be found well into the dry interior of the eastern Karoo desert. 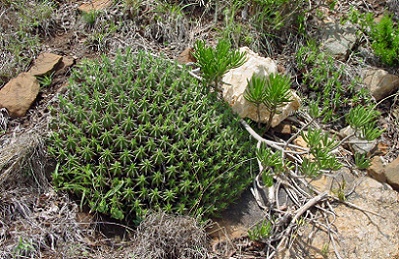 While this is a very characteristic cushion plant, it is not the only euphorbia species showing the form. Another very prominent cushion euphorbia is Euphorbia clavarioides, which differs from it by having smaller stems that lack spines. They are equally wonderful plants, which I also hope to feature here soon. Several other cushion euphorbia species occur from the Eastern Cape to the dry central interior; these are fairly rare species, but if protected some of them, too, can become massive. An interesting feature of some cushion euphorbias are their contractile roots. The roots penetrate down deep into the soil during the rainy season, absorbing moisture. Then, during the dry season, the roots start drying out, and as they dry out, they shorten. This has the result of pulling the Euphorbia plant down deeper into the soil. In very dry winters they can even be pulled down entirely below the soil surface, wind-blown sand covering them. This has the effect of protecting them against the sun and dry winds so that they don't dry out any further. As soon as rains return, the roots relax and the plant pops up again. But these contractile roots give rise to different features in different environments. Only where the soil is deep and sandy can the plant be pulled down deep into it. In such sandy soil, the plants tend to be drawn down almost flush with the soil surface year-round. But where the soil is hard and rocky, the roots, even when they contract, can't pull the body of the plant down much. On such rocky substrate, the main part of the plant remains above soil level, forming these raised mounds. In the previously mentioned species, Euphorbia clavarioides, plants of both the flat and mound-like types are frequently seen.


Another feature that is both interesting and ecologically important is that cushion plants often act as 'nurses' for other plants! These mounds, especially if they are spiny, provide safe areas where the seeds of less well-protected species can germinate and grow for many years until they are big enough to no longer need to worry. In Lesotho, the species Euphorbia clavarioides does this for the unique and spectacular spiral aloe, Aloe polyphylla. Little nooks in and around the mounds provide cozy corners where the young aloes are protected against fires, drying winds, and browsers. On the hill where I photographed these euphorbia pulvinata plants, I also saw other succulents associated with them. My third photo shows a Senecio barbertonicus, and my fourth a species of Delosperma, each growing in a small cranny between the body of a cushion euphorbia and a rock. In the same veld, other species of aloe were also often growing along with the euphorbias. This again shows how, in the natural ecology, one species often helps others to flourish, and high biodiversity boosts itself. 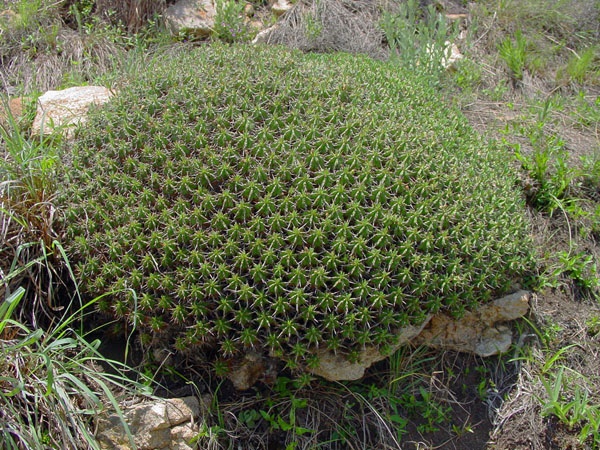 This is one of the easiest euphorbias to grow. It only needs its space, at least a yard of expansion room being necessary. However, it will take a long time before it will fill all that space! It is a fairly slow grower, but it adds new little heads every year and can be a very interesting little specimen at the age of five years or so. Being resistant against cold and wetness, it is one of a very few succulents from South Africa that can be grown outside in much of Europe and America. Even so it will only thrive in the warmer, southern parts. It will be a very interesting feature in a rock garden. In America, it might be interesting to compare it to the cacti. Though there are similarities between euphorbias and cacti, they are not close relatives. The succulent features of euphorbias were evolved quite independently from those of cacti, and similarities are due to being adaptations to similar environmental niches.


This plant can be grown by simply nipping off some 'heads', once the plant has enough of these to spare the loss of a few. Make the cut at the joint where one stem buds off another. Let them dry out for a week or so, then plant them. Not too deep, just the bottom centimetre/half an inch into the soil. Use sandy soil, but with a bit of compost. Keep the plants on the dry side of moist until rooted. Also, keep the cuttings in light shade. After rooting, you can slowly and progressively expose the plants to more and more sun. But if you put them in direct sun immediately – that is to say, if you live in a very sunny climate – the plants can suffer serious burning from the sun, leaving unsightly brown spots or even killing the plants. Some plants may prefer to have light shade year-round at any rate, growing better and greener where they have such protection, being more stunted and yellowish out in the full sun.


If you can't or don't wish to grow cushion euphorbias outside, you can grow them as pot plants. When they get too wide for the pot, you can remove some of the heads along the edges and plant them into new pots. Or you can simply water your specimen less often if you are concerned that it might become too big. Even a small specimen is a neat, interesting plant to have around!


This species is not threatened, occurring over such a large range and abundantly at some spots. Yet, I feel it should still be propagated and boosted. There are many areas of very suitable habitat that nevertheless lack these plants. And these large, spreading plant mounds give such a distinctive character to any place where they grow! Of course I feel that all plant species native to every region of South Africa (and the rest of the world) should be propagated, protected and encouraged as much as possible! 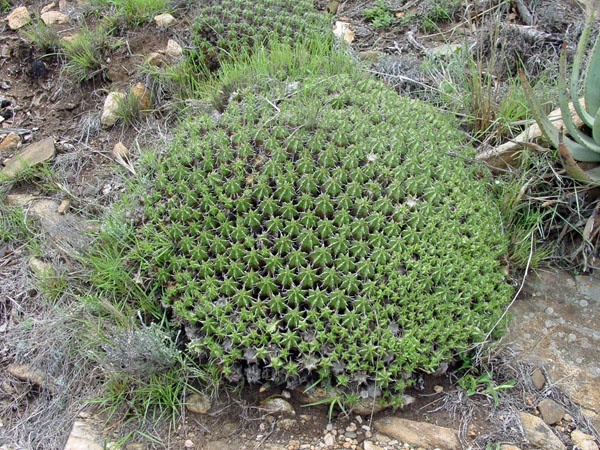