You want scary? How about science? 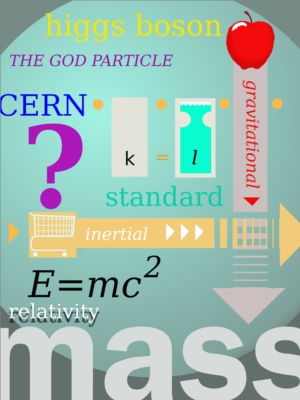 Once upon a time, so the history lesson goes, humans were easily imposed upon by charlatans with nutty ideas and glib approach to presentation. They would believe just about anything if it was told to them in the right way. In short, humans were gullible.

Now, of course, thanks to centuries of education and the invention of the internet by (take your pick) Al Gore, some guy in the UK, or Swiss particle physicists (of whom more later), we're all much too intelligent to fall for flim-flam. And we don't really believe in magic, no matter how many Harry Potter films we've seen.

Ancient people were horribly backward and superstitious. In ancient times, in order to understand the world, specially trained initiates studied the stars, meditated, and debated the nature of matter, energy, and the universe. To communicate their knowledge, and to keep the ignorant out of the discussion, they used special symbols to record their findings. A typical insight might look like this:

Modern people, of course, are much more sophisticated. Instead of relying on primitive superstition, they follow Science. In Science, in order to understand the world, specially trained initiates study the stars, meditate, and debate the nature of matter, energy, and the universe. To communicate their knowledge, and to keep the ignorant out of the discussion, they use special symbols to record their findings. A typical insight might look like this:

Obviously, modern people are much cleverer than their ancestors. The gobbledygook alone has made enormous strides in the last 10,000 years. We can be proud of ourselves.

Another enormous difference between our modern selves and our primitive ancestors is that we are much less easily intimidated by knowledge than were our forebears. For example, the authors of the first set of symbols worried that they might accidentally muck about with the universe and do it permanent damage. For that reason, they proceeded with caution (and appropriate sacrifices). They tried to tread softly along the boundaries of their ignorance.

Modern scientists have no such qualms. They scoff at anyone who claims, for example, that if they don't know for sure that Hadron Collider won't create a black hole that will swallow France, they should probably be careful where they point that particle accelerator. Bosh, say the scientists. The idea that the LHC will destroy the universe is nonsense. We're turning it on anyway…see? Nothing bad happened. Take that, superstition.

The claim that 'nothing will happen' is, after all, a safe one to make. If you're around the next day, you can safely say, 'We told you so.' If not, well, it's a moot point, innit? This strategy has worked well for so many inventions…such as the atom bomb, which failed to ignite the earth's atmosphere, thus wiping out the planet. So far, science is getting away with it.

Sort of, we guess. That great science writer, EA Poe, once said that the seed of the creation of a thing is also the seed of its destruction. Modern physicists are suspecting this might possibly be the case with the Higgs boson, which is upsetting them by not being heavy enough, or some such. This might be true of modern scientific methods which are heavy on the equations, hardware, and computer code, but rather light on the thoughtful consideration. The idea niggles in the back of the mind that maybe, just maybe, mind you, somebody in some lab somewhere has already set the events in motion that will unravel the whole fabric of space-time. Just saying. Who needs Lovecraftian horror? We've got PhDs.

Dr Frankenstein's problem was not that he was evilly intentioned, but that he was shortsighted. What was he going to do with that thing once he'd put it together? (We would at least have started a college fund.) As a scientist, Frankenstein could resist anything – except temptation. To paraphrase John F Kennedy: while others looked at the universe and asked, 'Why?', he looked at the monkey wrench in his hand, studied the works before him, and asked, 'Why not?' The Urge to Tinker may well be humankind's downfall.

This is how the world ends – not with a bang, nor even a whimper, but with an 'Oops!'