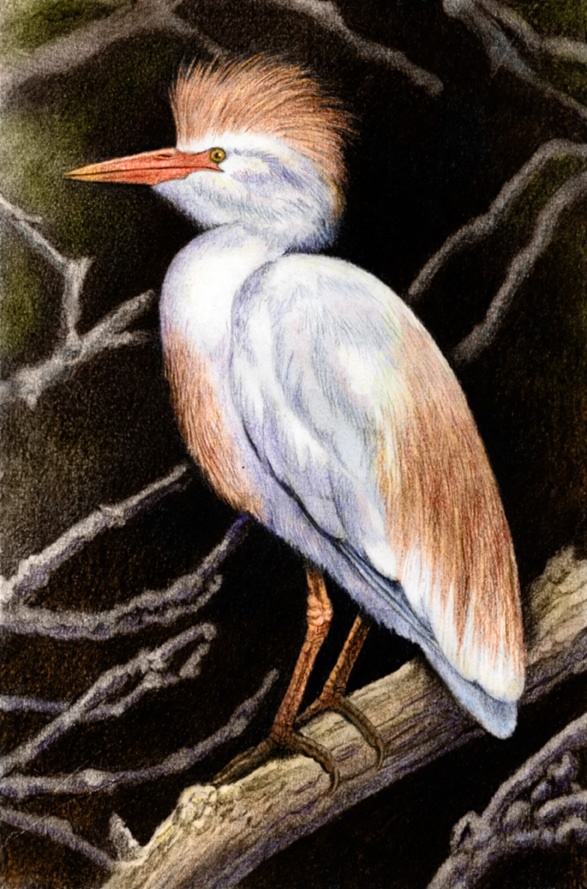 Today I have another birdy for you! This is a Cattle Egret, Bubulcus ibis. Although called an egret, this bird actually seems to be closer related to the herons, of the genus Ardea. This is a bird I know very well. It is extremely abundant here in South Africa. Cattle egrets are often seen following cattle, hence the name. They will snatch up grasshoppers and other insects stirred up by the grazing cattle. But these egrets are often seen on their own … they can hunt quite well enough without bovine assistance. They prefer fairly short and sparse grass, where they can easily spot the little critters they eat. Cattle egrets eat, in addition to the grasshoppers that are so plentiful in the grasslands, other invertebrates like beetles, flies, caterpillars and earthworms, and will also eat small vertebrates like frogs, lizards, small snakes and mice. On rare occasions, cattle egrets have been seen eating fruit. Although sometimes called a 'tick bird', it does not specialize in eating ticks off the backs of mammals. That niche is taken by the Oxpeckers, relatives of starlings. Cattle egrets might on occasion snatch ticks or flies off a cow's back, and also are often seen riding on cattle. Apart from domestic cattle, they also follow wild animals. But not every kind. Buffaloes are all right but rhinos move too slowly, not stirring up the insects fast enough, while others, like impalas, move too fast, or not in habitats open enough for the cattle egrets to hunt in. But cows move at just the right speed for them, a relationship seemingly made in heaven!


There are two kinds of cattle egret: the western kind which originally lived in Africa and Europe, but now is also found in the Americas (which I'll soon discuss), and the eastern kind, which originally lived in Asia but is now also found in Australia and New Zealand. Sometimes they are considered to be subspecies of a single species, but sometimes they are considered to be distinct species, the Western, Bubulcus ibis, and the Eastern, Bubulcus coromandus. A form somewhat intermediate between the two is found in the Seychelles islands. The scientific name 'Bubulcus' means 'herdsman' in Latin, while 'ibis' is the name of a similar white bird, the Sacred ibis. Ibises and egrets are only distantly related, however.

The bird I picture here is showing off its breeding plumage. The proper white egrets of the genus Egretta develop beautiful long, wispy, white plumes on their upper backs in the breeding season. The cattle egret also gets long plumes on its back, but these are buff to reddish brown in colour. It gets a similar patch of plumes on its breast, and also a buff to reddish brown crest on its head. Its ordinarily greenish-yellow bill and legs turn orange-red. Its feet remain a dark brownish colour. These are egalitarian egrets: the males as well as the females grow the handsome breeding plumage. Outside of the breeding season, cattle egrets have pure white, sleek plumage, in which they look much more slender. They reach a head-and-body length of 55 cm/22", and a weight of about half a kg/just over a pound.


The breeding pair greet each other with harsh, guttural calls. Both sexes build the nest, incubate the two to five eggs, and feed the chicks. The chicks, like other herons and egrets, are very ugly – in an endearing way! But they fledge in about a month, becoming elegant egrets like their parents.


Cattle egrets can be sneaky breeders. They sometimes lay their eggs in the nests of other species of heron or egret, or sometimes a female will lay an egg or two in the nest of a different pair of cattle egrets. But this is not a very organized or successful strategy, so they don't at all qualify as nest parasites in the mold of cuckoos.

Perhaps the most remarkable thing about cattle egrets is how recently they conquered the world! The species was originally from the old world, found all over Africa (apart from the rainforests and the deserts) as well as in southern Europe and Asia. Remember that species are often very old in human terms … this species too must be a million years old or more, and over most of that time it lived by hunting on its own or following wild antelopes, deer and cattle. Only when human civilisation began and people started domesticating cattle, the cattle egret suddenly had new opportunities. There are more cows on the planet today than there have ever been large grazing mammals before, and thus cattle egrets found themselves with an advantage. Wherever humans spread with their cattle, the egrets followed. In Africa, Europe and Asia, their numbers increased. But also they managed to realize there were opportunities across the oceans! Starting in the late nineteenth century, cattle egrets were seen in the Americas, first in South and Central America (the shortest trip from Africa being to Brazil, the Guianas and Suriname), but by 1941, in North America also. By 1962, cattle egrets were breeding in Canada! In Europe, after an initial decline, the egrets increased again and spread from the southern parts northward. By 1958 they were breeding in southern France, by 1985 in Italy, by 2008 in Britain, and also moving into Ireland. Cattle egrets also hopped over the sea to colonize Australia, starting in the nineteen forties, and by the sixties they were in New Zealand.


This remarkable feat of colonization is possible because cattle egrets are natural nomads. In much of Africa, rains are unpredictable, while Asia has its monsoons, seasons of torrential rains followed by long droughts. Many large mammals follow the rains so as to find good browsing and grazing. The birds follow the rains too, but because they have wings, they can move much further much faster. When conditions are really hard in some region, the birds may end up flying out long distances in all directions. There is also a tendency for birds to disperse widely after they've finished breeding. Cattle egrets in such cases might wind up in wayward places1: they've been seen on remote islands like South Georgia and Fiji, and entire flocks have been seen flying over the middle of the Atlantic Ocean, meaning a flight to the Americas is not all that great of a strain. What happened is simply that egrets making these long voyages now, unlike before, found something familiar at their new landings: humans herding cattle. So they could simply slot into their familiar lifestyle with minimal culture shock, and the rest is history.