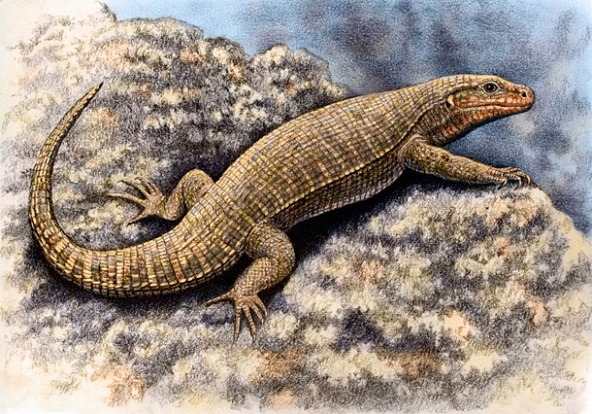 It is high time I featured another reptile here. This is the Giant Plated Lizard, Gerrhosaurus validus. Here in South Africa, this lizard is only exceeded in size by the Monitor Lizards. It can reach a length of 80 cm/32".


There's not much info available on these lizards. This one I've seen a few times myself. It lives in hot, dry savannah and woodland country in the north of South Africa, and in other Southern African countries. It usually sticks close to hills and rocky places. As its name indicates, it has lots of hard plate-like scales embedded in its skin, giving it a useful armour. The plates are quite neatly arranged in rows. It is similar to but less spiny than the armour of species of Cordylus, which include the Armadillo Girdled Lizard. The girdled lizards are relatives of the armoured lizards, but are usually put in a different family. There are fewer species of armoured lizards than of girdled lizards. But they, too, use similar defensive strategies. When danger is suspected, these lizards will scramble into crevices in the rocks. Their box-like bodies can be flattened to squeeze into narrow cracks, but once in, they inflate their bodies, wedging them in so firmly that they're almost impossible to extricate. But even if extricated, their tough armour would make them very hard to bite into. Surely not an appetizing snack!


In spite of their good defenses, these powerful, chunky lizards are a bit skittish. They will stay close to their hiding places, hunting around for insects and small critters, including small rodents, birds and even other lizards and baby tortoises. They feed on some plant material as well, and can apparently be lured out of their dens by the smell of grapes or mangoes! They live in small family groups and may even have a sort of 'social life' … something still very poorly investigated by science. It is amazing that we are only now realising that what we considered to be 'lowly reptiles' may in fact be animals with quite sophisticated behaviour.


When not hunting, these robust lizards often take it easy by basking in the sun on top of the rocks. This is when they are most easy to spot. However, if you approach they will quickly see you and scurry back to cover. In some places, however, giant plated lizards have become accustomed to humans and learnt not to see them as threats. This makes them far easier to approach and photograph. They are generally not brightly coloured, although babies and juveniles have bold light-and-dark stippling and bars on their bodies. These gradually fade as the animals mature, big adults being rather uniform brownish. Males can have some reddish-orange markings on their heads. 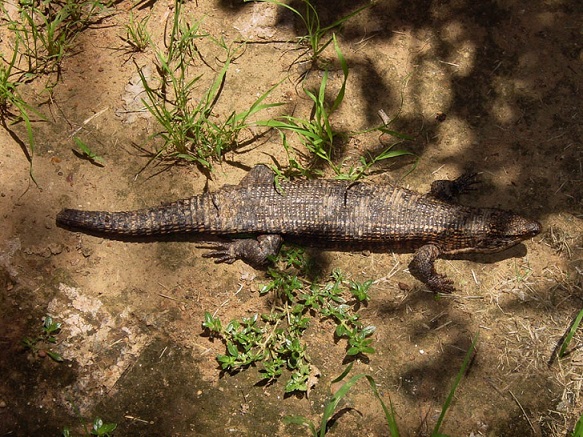 The plated lizards and girdled lizards are a characteristically African sort of lizard, quite diverse, with species ranging in size from very small to these giant ones. There are even species that are legless! A few related species also live in Madagascar.