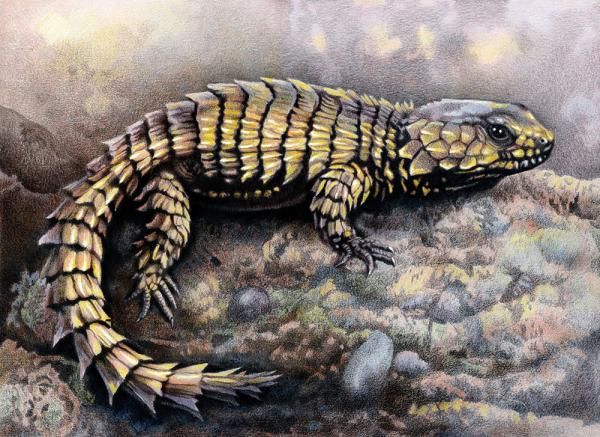 It's time again for a reptile! Here you have a very pretty and spiky-looking critter, an Armadillo Girdled Lizard, Cordylus cataphractus. In Afrikaans we call it a ‘Blinkogie' (little bright-eye). It's eye is not particularly bright, but indeed rather large and prominent as far as lizards go. Most conspicuous of course are its ‘girdles'. Its scales are modified into plates ending in sharp spines that are arranged in rings around its body and tail.


This feature is one it shares with other girdled lizards forming the genus Cordylus, which occurs mostly in South Africa. They are part of the Armoured Lizard superfamily, the Cordyloidea, which includes several other genera in sub-Saharan Africa and Madagascar. I shall soon illustrate more members of this fascinating group.


The Armadillo Girdled Lizard occurs naturally in the Western Cape Province of South Africa. It inhabits rocky places with lots of narrow crevices in which it can hide. It
is the spikiest member of its family; the spikes offer excellent protection in more than one way. It protects its skin against bruises and cuts in the harsh rocky environment. Also, if a predator comes upon one in a crevice, the lizard will expand its body; the spikes will then wedge against the walls of the crevice making it almost impossible to extricate. But if it is caught on the outside, it has another strategy – it rolls itself into a ball, grabbing its tail in its mouth like a real-world counterpart of the Ouroboros, the alchemical dragon which bites its own tail. It is a potent symbol: the dragon consumes but simultaneously reproduces itself. I'm not sure if the alchemists knew about and were inspired by this little lizard or not.


But short of constituting an alchemical symbol, the lizard rolling itself in a ball like this will again thwart most predators. The spikes on its back now all jut outward and like that it is certainly a very hard ‘pill' to swallow. Maybe Alanis Morisette used it as inspiration for naming her breakthrough album. This posture also inspired its common name, armadillos also rolling themselves into a ball for protection – but their armour is not as spiky! But birds of prey, with their tough beaks and talons, are not always daunted by these spiky lizard-balls.


Luckily this lizard has yet another defense: biting. If a predator should still persist in trying to eat it, it will release its tail and bite its assailant instead. Its jaw muscles are so strong that it has been recorded breaking its own jaw bones while biting. And finally, like many other lizards it can shed its tail. The twitching tail could distract the predator while the lizard makes its getaway. It probably is not a very satisfactory consolation prize for the predator, being so spiny. The girdled lizard can then regenerate its tail, but as typical the new tail will be a somewhat poor copy of the original. Because its tail is quite important to it it will not shed it except under the direst circumstances. 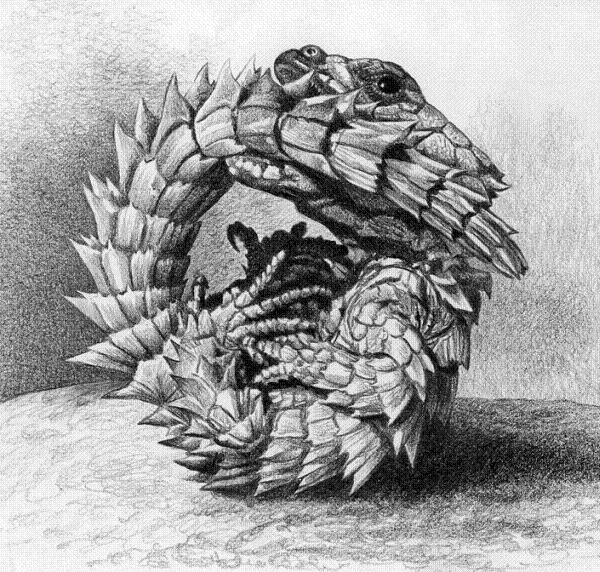 These lizards are medium-sized, from 16 to 21 cm (6.5"-8.5") in length, but with sturdy bodies. They live in arid regions, the deserts and subdeserts of southwestern South Africa. There are many rocky hills and outcroppings that suit them. They eat insects – mainly termites – and other invertebrates, as well as a small amount of plant material. These regions, though arid and sparsely vegetated, are rich in flowering plant species, many being succulent. The rain falls in winter when temperatures are milder. Consequently these lizards are more active then, eating and putting on fat. In the extremely hot and dry summer they are far less active, hiding in the shade and shelter of the crevices for most of the time.


They are unusual among reptiles in being social, living in groups of up to 60 animals, but usually fewer. These groups are often relatives, for instance an adult pair along with their offspring. But there is considerable immigration and exchange between groups. Dominant males stake out and defend territories in which they will allow, under their rule, females and subordinate males or youngsters. Displays used for territory defense and impressing females include bobbing the head, flicking the tongue and wagging the tail. The lizards also alert each other to the presence of predators.


Again unusually for lizards, the female does not lay eggs but gives birth to a single baby (very rarely two). In truth the baby hatches from an egg inside the female, so it's not quite the same as live birth in mammals. The gestation period is very long: six to eight months. The baby is quite large relative to its mother and born at the start of the rainy season. The parents do give some care to their children, protecting them and even bringing them food. Indeed, living in a group like this is beneficial to all members where foraging and safety is concerned.


Because of their striking appearance these lizards are often kept as pets. In fact there is a significant stress on the wild populations due to people collecting them to sell. In my opinion this is not a good species to keep as a pet. Because of its social nature its lifestyle cannot easily be replicated and I'm not sure they breed well in captivity; consequently most if not all individuals that are bought as pets probably are collected illegally from the wild. Because of the poverty of many communities in their native range many people are very powerfully tempted to make money by catching and selling them. There are current initiatives here in South Africa to combat this. Captive breeding projects are a different matter; if done responsibly this species can certainly benefit from a number of breeding populations being maintained outside of its small native range. In captivity this species can live for twenty-five years.