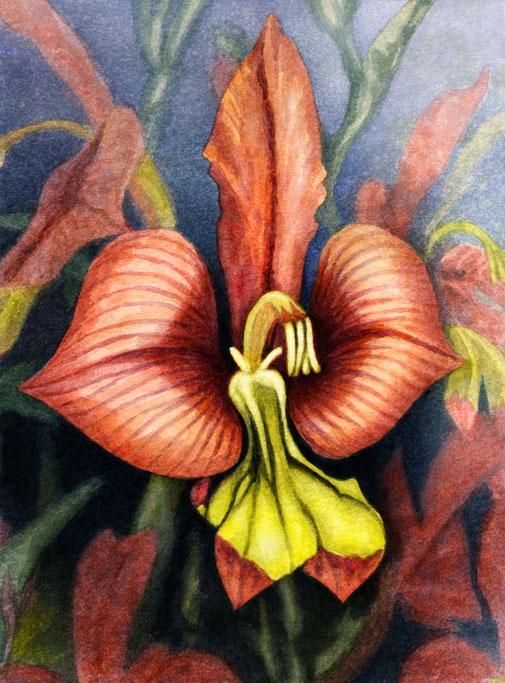 Again with the funny names! This lovely flower is called a 'Kalkoentjie' (Little Turkey), because somehow, apparently, the hanging lower lips reminded someone of a turkey's wattles. Yes, me neither. But at any rate, what this is, is a species of Gladiolus, to be exact the species Gladiolus alatus. The scientific name means 'winged little sword'. The 'little sword' part is what all gladioli are called because the leaves resemble sword blades, and the 'winged' refers to their leaves resembling wings. It might also refer to the flat, winged seeds … which other gladioli also have, so there's nothing distinctive about that. Moral of the story: neither common nor scientific names necessarily make much sense.


But the thing itself though: this little turkey flower is one of the most distinctive and beautiful to be found among the gladioli. The species occurs in the Western Cape province of South Africa, over a variety of habitats, from semi-desert to moist fynbos. Fynbos is the kind of vegetation unique to the southwestern corner of South Africa. It consists of masses of fine-leaved shrubs, amidst which a great many flowering herbs and bulbs like these gladioli grow. Fynbos is the species-richest kind of non-tropical-rainforest vegetation in the world.

In the fynbos, gladioli are some of the most conspicuous and striking flowers. There are more than 100 different species to be found in the Western Cape. Another 60 or so species are found in the rest of South Africa, another 100 still in the rest of Africa, and only 10 are native to Eurasia. The fynbos is the centre of diversity for the genus. They occur in a dazzling diversity of shapes, colours, textures … wild gladiolus flowers are generally small and delicate, but exquisitely formed.


The flowers of gladioli are fairly distinctive, and most species, when encountered and flowering, can with reasonable certainty be placed in the genus if given a good look. They have three petals and three sepals which have become petal-like, so that both petals and sepals are called 'tepals'. There is usually a tepal at the top which curves like a hood over the stamens, the male organs (you can see them, curved forward and downward, in my painting). The lower part of the tepals are fused together to form a tube, which contains the nectar. Gladioli are pollinated by long-tongued bees, moths, and flies. The larger ones are sometimes pollinated by sunbirds.


Commercially grown gladioli are mostly hybrids and cultivars from just a few of the larger-flowered South African species.


The genus Gladiolus belongs to the Iris family. The family as a whole is tremendously diverse in the fynbos and the rest of South Africa. Drivers of diversity include soil types, rainfall, exposure to sun, pollinators, browsers, and exposure to fire. The southwestern Cape has numerous mountain ranges, and their northern slopes have very different climates from their southern slopes. Slopes exposed to moisture-bearing winds receive heavy rainfall, but cut off the rains for the regions beyond them, so casting 'rain-shadows' of semi-desert vegetation. High, inland plateaus receive heavy frosts in winter. Various members of the iris family have developed different strategies for coping with all the different environments. Their bulbs or corms, storing water and nutrients, enable them to survive prolonged drought and/or intense cold. These underground organs also survive fires, and indeed some species take advantage of this, the corms sending out sprays of colourful flowers right after a fire has ravaged the overlying vegetation. These flowers in the burnt veld are very conspicuous, drawing in the pollinators from afar. They then rapidly release their seeds which can easily germinate and draw nutrition from the soot and ash, and grow for the first few months of their lives without competition from neighbouring plants.


In more benign climates, irises can grow year-round. On the moist slopes of the Kogelberg several iris species have evolved a branching, evergreen, leafy shrub-like habit. Many wild irises have extremely poisonous leaves and corms to protect them against insects or mammals that want to eat them. Others grow in the shelter of clumps of restios and other dense shrubs, where browsers or mole-rats can't get at them. But iris flowers are made to attract a great variety of insects, their colours, fragrance and shape suiting them to attract specific pollinators, with different species growing in the same region often being suited to different pollinators. A few species of iris are adapted to bird pollination, and I hope to be mentioning one of the most fascinating of those in this column soon!

Among the gladioli, the little turkey is one of the smaller species, but very charming. Its flowering stems reach a height of about 30 cm/12", and the fragrant flowers reach 4 cm/1.6" in diameter. Flowering time is in late winter to early spring, and individual flowers remain on the plant for about a week. The leaves are sickle-shaped and ribbed lengthwise. They grow mostly in open vegetation on sandy flats, but also on mountain slopes and plateaus, often in gravelly or rocky soil. There are a few other similar species, for instance the distinctive Gladiolus equitans which grows in the Namaqualand and Kamiesberg region.

These flowers are not from my part of the country, and I have not yet got around to growing them. I am indebted to the PlantzAfrica site for the cultivation information. The ideal sowing time is in early autumn. The seeds are delicate and should be sown in sterilized soil. The sterilization can be achieved by baking the soil in an oven for half an hour. An ideal soil mix is two parts sand, one part loam and one part fine compost. Put the soil in a deep seed tray and sprinkle the gladiolus seed lightly on top, spaced so the seedlings won't be too cramped. Sprinkle a thin layer of sand over the seeds, keep moist, and let the seedlings grow for a season or two before planting them out.


The species can also be multiplied from its underground corms. These plants grow in winter and in summer lose their leaves and go dormant. This is the time to remove the corms. Pick corms that are at least a centimeter/half an inch or so in diameter. You can store them in a dry place over the summer and plant them in autumn. Use a very sandy and well-draining mixture to plant them in, and cover them in just a thin layer of soil, water sparingly until the leaves emerge, then water regularly.


Outside its natural climate, this species should be grown as a pot plant rather than outside. Always remember that it is a winter grower. Plants in their summer dormancy should be watered very sparingly. The species is vulnerable to fungal attacks if overwatered, but a fungicide can help as emergency treatment. In regions of favourable climate, the species can be grown outdoors, and work well in a rockery where they have some protection against mole rats and porcupines.