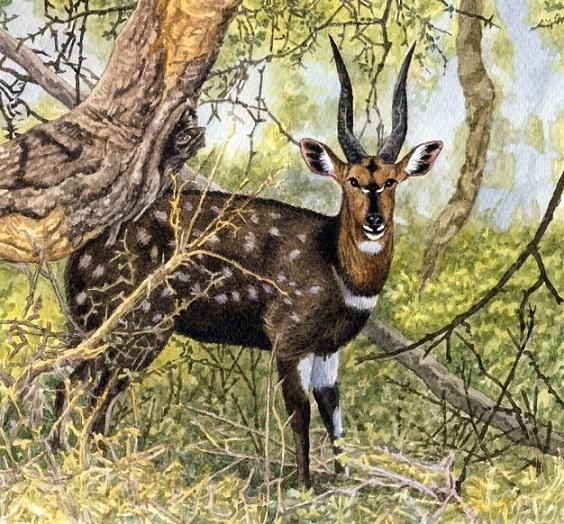 Now for one of my favourite antelope species! The Bushbuck, Tragelaphus sylvaticus, is the smallest of the spiral-horned antelopes (the Elands being the largest), and also the most abundant here in South Africa. Like the Kudu it is also adaptable and able to survive outside of game and nature reserves. It only needs a bit of woody cover, as you might conclude from its name, and access to drinking water. Bushbucks are found in the wilder regions around my town of Polokwane, and I see them fairly frequently. 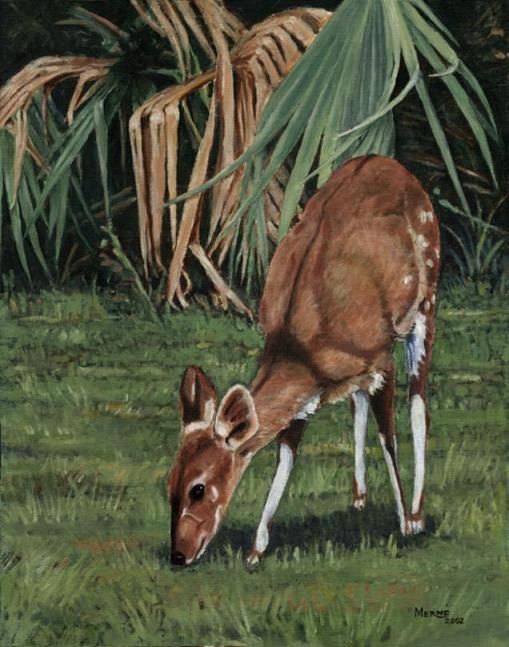 My nicest experiences of bushbucks were in the Letaba rest camp of the Kruger National Park. There, bushbucks have become extremely tame and they enter the camp and feed in plain sight. The painting of the grazing bushbuck ewe was done by my father, Peet van der Merwe, and the bushbuck lamb photo was taken by me, both being bushbucks roaming the camp. They are such beautiful creatures and seeing them so tame and peaceful is like being in a real-world Garden of Eden. Some people feed them, which I don't think is a good idea, but I've never heard of a bushbuck attacking or injuring a person who fed them…

… But with hunters it is a different story. The stocky and powerful bushbuck rams are considered the most dangerous of all antelopes to hunt. In the dense bush you can't always get a good shot, and if the bushbuck is not immediately killed it will scamper off into even denser bush. There, it will turn around and wait. The hunt has now reserved … it has become an ambush! The hunter, venturing into the bush, now has to be extremely vigilant or the bushbuck will spot him first, storm out and gore him with his short but stout and very sharp horns. One of the reasons why I'm not a hunter, folks! But these antelopes are so beautiful, I'd never want to harm them. As it is, bushbucks are renowned for their bravery in fighting back even when badly injured.

It used to be thought that bushbucks constituted a single, very widespread and variable species. But recent genetic studies have suggested there are actually two species. The bushbuck found in southern Africa also extends into eastern Africa, and is considered one species, Tragelaphus sylvaticus, sometimes called the Imbabala. The kind from central and western Africa, sometimes called the Kéwel or Harnessed Bushbuck, is now classified as Tragelaphus scriptus. (The name 'Kéwel' comes from the Wolof language of West Africa, while the name 'Imbabala' comes from the Xhosa language of South Africa. Actually over here 'Imbabala' refers strictly to a female bushbuck, the term for a ram being 'Inkonka'.) The weird thing about the genetic studies is that the Kéwel has been shown to be most closely related to the Nyala (an antelope I hope to feature here soon) of southern Africa, while the Imbabala is most closely related to two mainly central-African spiral-horned antelopes, the Bongo and the Sitatunga. But in all respects the Kewel and Imbabala resemble each other very much more than they resemble these other antelopes they are more closely related to. Nyalas, Sitatungas and Bongos are all much bigger, with much longer horns. Kéwel and Imbabala bushbucks both have short, nearly straight horns with a very slight degree of spiraling. They stand at most about a meter/yard at the shoulder, with a bodyweight of 25-80 kg/55-175 lbs. Both have stocky bodies, sometimes with a narrow mane along the midline of the back in the bulls. The Kéwel or Harnessed Bushbuck is more brightly coloured, usually rich rufous decorated with a profusion of spots and both vertical and horizontal lines along its sides. The Imbabala is usually more dull brown, with only a few spots along its sides – this is the one in my illustration. Bushbuck ewes of both species are hornless, and not much smaller than the rams. Some populations of bushbucks are very dark, almost black.


Interestingly, Imbabala bushbucks and Nyalas (as indicated above, supposed close relatives of Kéwel bushbucks) are often incompatible on game farms or in small nature reserves. The larger nyala bull will drive off the smaller bushbuck rams. But this mostly happens in regions where nyalas were not native, but have been introduced. Where both species naturally occur, they manage to share. Also, bushbucks can enter denser forest and bush while nyalas prefer more open grassland/woodland/thicket mosaics.


If the genetic studies are indeed reliable, they show a very weird phenomenon, that two not particularly closely related species could come to resemble each other so closely that for centuries scientists considered them to be a single species. 'Choosing' a similar lifestyle in a similar habitat might have molded the two groups into a similar body size with a similar horn length. I'd like to know more, though. As it is, the bushbuck we have over here is the one far more studied, and hardly anything is known of the more tropical Kéwel or Harnessed bushbuck.


Life in the Bush 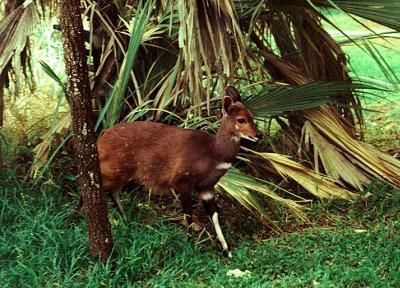 The bushbuck we have here is not a very complicated antelope. They don't form herds. Rams are usually seen on their own, but ewes are often accompanied by lambs. The species is not territorial, and you might come across several different bushbucks in the same patch of forest. But the rams do have a rough hierarchy, with the oldest, biggest and most virile rams having the highest status and the most privileges, such as access to the ewes. Bushbucks feed on grass as well as leaves of trees and shrubs, pods, and fruit. They feed mostly at night, but also in the early morning and late afternoon. They are very good at hiding, crouching and freezing when they sense danger. But when a predator approaches more closely, the bushbuck will bark loudly. This tells the predator that the bushbuck is on the alert … a particularly loud bark might even frighten the predator! The barks will also alert other bushbucks in the vicinity. Bushbucks will also bark while foraging, this signaling their movements to nearby bushbucks. Another vocalization is a twittering uttered by the ram ready to mate!


Mating can happen any time of the year, but in regions experiencing winter drought it happens mostly in the wet season. Bushbuck ewes usually give birth to just a single lamb. This lamb will be hidden in dense bush for the first four months of its life, its mother coming back to it a few times each day to suckle it. After that, the lamb will follow its mother. The prominent white patches below the tail, in the ears, on the forehead and the lips allow bushbuck lambs and mothers to more easily fix on each other in the gloomy bush interiors. A mother approaching her lamb will bob her head up and down to make these visual signals even more easily visible. Adult bushbuck rams, on the other hand, display the sides of their bodies to each other. They are rather flat-sided and their deep bodies with the mane on the back enhance the appearance of size.


Interestingly, bushbucks are good swimmers! The dense habitat they frequent often fringes rivers, and they will enter these to forage or sometimes to hide. When the Zambesi river flooded the Kariba Dam, there was a rescue operation to save wildlife from drowning. The bushbucks didn't need this service. They tried to stick to their native haunts but as these flooded they swam from one island to another, sometimes covering as much as 3 km/3 miles! This swimming ability seems to be a remaining link with the Sitatunga, a close relative as stated above. Sitatungas inhabit swamps and are excellent swimmers.